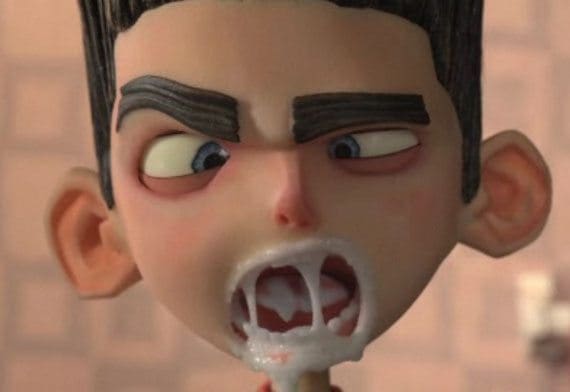 Laika Studios’ ParaNorman hits the big screen today and in addition to what is sure to be a darkly humorous romp in stop motion animation it will also be touting some of the latest tech. At this year’s SIGGRAPH conference in Los Angeles, Laika hosted a special production session to go behind the scenes and talk about the rapid prototyping process that was used to make ParaNorman.

Rapid prototyping is a relatively new process that uses a computer guided laser to sculpt a digital model or blue print out of dense plastic. In the case of ParaNorman, Norman’s character was first modeled in 3-D like most other 3-D animated heroes. Pieces of him were then sent to the rapid prototype printer. And for any stop motion or even claymation enthusiasts this is the point of true epiphany; over 150 faces were created for just Norman. Each of these faces with a slightly different expression to be changed frame by frame as Norman reacts, talks, or even just stands still.

Even then, once the hand animation was completed the shots were imported digitally to have the seams (spaces between the face attachments) hidden and colored out. Each face was color matched, retouched, and animated by hand. With very minimal digital retouching and some true-to-life, texture inspired, computer generated special effects, Laika is proving once again true dedication to craft and attention to detail.

In 2009 Laika studios premiered their first feature-length motion picture, Coraline wowed audiences with their phenomenal use of stop motion animation; the likes that hadn’t been seen since, now cult favorite, Nightmare Before Christmas. In a ‘making of’ talk about this film the studio revealed that every flower had its own rig and was hand controlled to capture the artist’s vision. Even if you’re a little overwhelmed with the number of Halloween inspired films coming to theaters soon (Disney’s Frankenweenie, October 5th and Sony Imageworks’ Hotel Transylvania, September 28th), Laika’s dedication to detail and focus on retaining the artist’s touch is sure to make ParaNorman worth while.

Check out the latest trailer here or see it in theater’s today!
[youtube http://www.youtube.com/watch?v=OtBlbStz6kQ]