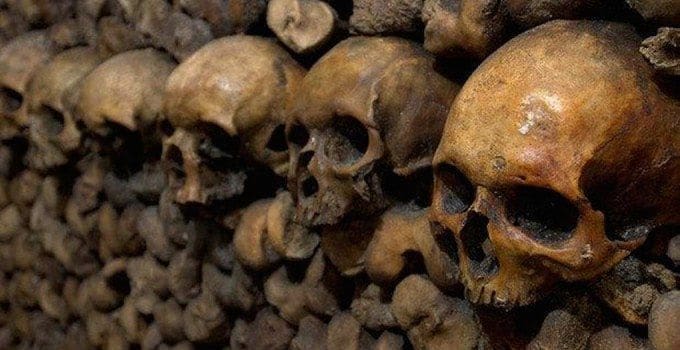 The catacombs, with its eerie location beneath Paris and morbid architecture, would seem to be an obvious choice to center your horror movie around.  Several films before have used it as well in some fashion or another.  It’s history is well documented; but with all those tunnels and endless darkness, you can’t help but let your imagination run wild down there.  Perhaps a gateway to hell wouldn’t be the weirdest thing you’d find.

In As Above, So Below, directed by John Erick Dowdle, Perdita, a young and aspiring archaeologist,  is searching for an ancient artifact known as the Philosopher’s Stone.  Her work leads her to Paris where she teams up with a friend named Ben.  His ability to decipher clues, written in a specific dead language, aids Perdita on her quest; not unlike Indiana Jones and the Last Crusade in some respects.  With the help of some friendly locals, they make their way to the catacombs unnoticed via a secret passageway.  Once her newly formed crew get wind of an actual treasure hidden somewhere in the tunnels, they are more than eager to venture forth.  It’s this misguided eagerness and apprehensive excitement that leads them to make several bad decisions from here on out.  These treasure seekers discover some interesting and, eventually, awful things along the way.  Also if you suffer from claustrophobia, this movie won’t help.

At the center of this film is fear.  Fear of the unknown and fear of the things that haunt us personally.  Encase that in a skull-covered lair with several descending levels of terror, and you have yourself a nail-biting ride where the only light you have is on your head.  Fear is also prevalent in the film’s imagery. Quick shots of things you may or may not have seen and some of them are surreal.  A mix of memory and nightmare manifesting itself for your otherworldly enjoyment.  Of all this, though, I found the best fear came from the sound.  The noises and the music.  The echoes rising and falling from all around.  Sounds that twist themselves and change shape as they keep moving.  A shivering chorus of damnation that just yells at you to walk away and go home.  Do they take the hint?  Not at all.

The movie is unfortunately done in found footage format; which I personally am a fan of when it’s done right.  We can all agree the shaky camera idea is not good for anyone’s eyes.  How do you stay emotionally involved with the characters when you’re too busy trying to focus on a single image?  Hopefully someone dies or injures themselves so you can use their motionless lens to view the aftermath.  Not the prettiest of ideas, but believe me I savored those scenes.  Had the movie been shot with traditional cinematography, it would have been more effective and a smoother ride visually.  Found footage is just a shortcut for engaging the audience by making them feel as if they are there.  We are also meant to believe it all really happened.  If you have a good cinematographer, and an experienced director and editor, you will have a better chance of making a film that visually enlightens the audience and makes them scream while they white knuckle their armrests.  Whichever method you choose, try to keep the motion sickness to a minimum.

The dialogue became a little redundant at times.  Sometimes it feels like a first draft script that needs a proofread by someone who can recognize clichés and repetitive speech.  Granted clichés are a horror movie’s best friend; but if you are aware of them, then you can use them to your advantage.  The story at least had me wondering what else they might find as they proceeded further into their journey.  The thought of each impending nightmare drives your curiosity.

Overall the movie works if you can get over the shaky bits.  The elements of traps and hidden gateways is a worthwhile trip blending history and fantasy with suspense and psychological torment.  I recommend this to anyone who is fascinated by the catacombs in general and also intrigued by alchemy and magic as it pertains to our past.  A movie that explores fear from within is always more interesting than a typical cattle prod scare, which it also has its share of.  I wasn’t entirely happy with the ending, but that’s more of a preference based on where the story was headed.  In movies like this, the journey is far more exciting than the destination anyway.  If you can survive.

About: As Above, So Below

Synopsis: When a team of explorers ventures into the catacombs that lie beneath the streets of Paris, they uncover the dark secret that lies within this city of the dead.

The Irishman | A Career Highlight For All Involved