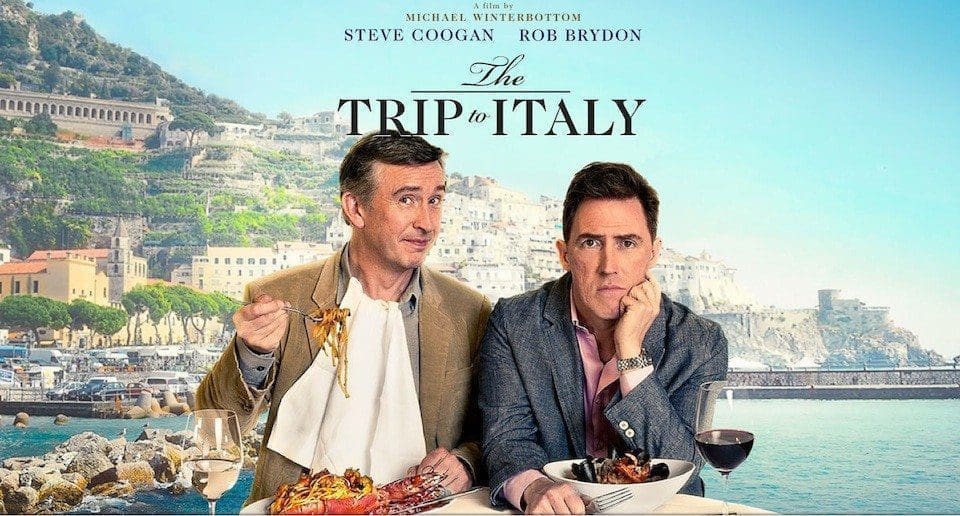 The Trip to Italy is not your typical feature film. It started as a British mini-series that was cut down to become what you can see in theaters today. Think of it as a Game of Thrones season cut down a two-hour movie. You miss a lot of the finer details that tie everything together, but what you end up with is a lot of quality due to all of the fat being trimmed away. It’s a give and take, but it works for the most part.

If you’ve seen the first film (The Trip), this is more of the same. It features Steve Coogan and Rob Brydon playing fictional versions of themselves. They travel around Italy eating food and telling jokes. Some jokes are more direct, while others come in the way of light banter between the two and the people around them.

It should be noted that while many of the jokes target pop culture references, this is a British movie and the jokes are very British in nature. If you’re not generally a fan of British humor, there’s a good chance many of the jokes will fall flat in your eyes. This isn’t Lock, Stock and Two Smoking Barrels humor, it’s more along the lines of the British version of The Office, or The IT Crowd.

While food is a big part of this movie, it’s not the main focus at all. The two actors travel from eatery to eatery, and they devour some delicious-look meals, but the banter between to the two makes up the bulk of this film. You’ll see the food, the two will talk about the food, but that’s not what this movie is about.

Throughout the film you’ll hear a bit about their families and their general lives outside of this trip to Italy, but all of this is ancillary material. This is a movie about two British comedians talking about things. During the process they eat at Italian restaurants and partake in the Italian countryside, but first and foremost this is a film about talking and making fun of anything and everything.

Once again, if you like British humor, you should really enjoy The Trip to Italy. If you saw The Trip, this is more of the same and you should have a similar reaction to it. If you’re not into British humor or like more action in your movies, this probably isn’t going to be one of your top films of the year. It has a very specific target audience, but it does well to play to that audience.

About The Trip to Italy