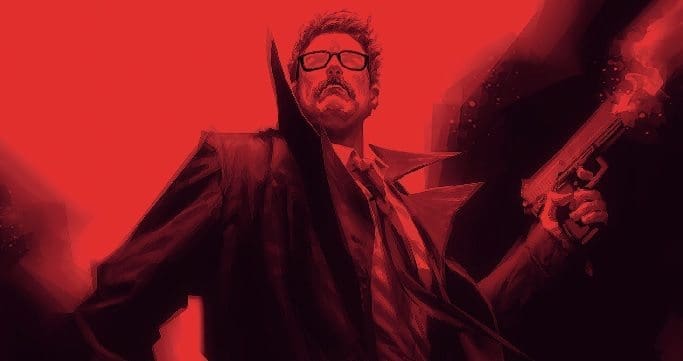 After putting Barbara Gordon through the wringer like she was in the previous issue of Batgirl, any other writer would give the character a break, but not Gail Simone. Batgirl #24 opens as a straight continuation of the last issue:  Barbara is holding her dying boyfriend in her arms and the Gotham police, led by her father, Commissioner Gordon, have her surrounded. This issue does remove some of the consequences of the previous one, but the frenetic pace of the last installment is mostly still in tact. Barbara does get time for a well-deserved nap but considering the note on which this issue ends, she won’t be resting her eyes again for a while.

Even without her costume, Batgirl is at odds with the villains of her past, all of who make a return to her world under the leadership of Knightfall. Yet the biggest antagonist to Batgirl so far in this Wanted! story arc is Barbara’s own father. Tension between what’s left of the Gordon family has been on the verge of a crescendo ever since the death of James Jr. and there’s a gasp-inducing moment where Barbara nearly punches her father in the face during her scuffle with the police. It’s enough to make Barbara realize her vigilantism is getting out of hand, though she nonetheless vows to never forgive her father for shooting her boyfriend and putting him into a coma. Poor Ricky, after all that he has been through in this series–getting his leg amputated, being beaten, getting shot—it’s starting to feel cheap to keep him around as a hapless survivor, but I can understand that killing him off here could have unintentionally vilified Commissioner Gordon. It is, however, incredibly strange to see Detective McKenna appear fully recovered after she suffered what appeared to be a broken neck during the last issue.

Fernando Pasarin’s art is still a mixed bag, but one thing is for sure:  He can draw one heck of a Commissioner Gordon. There’s a definite sense that much like his daughter, Gordon has been put through hell and it shows on his face in each panel that Pasarin draws. There are still a few overly exaggerated facial expressions on many of the other characters and although Barbara only appears outside of her ninja-like getup for a few panels, her look is still very inconsistent. Thankfully there’s enough action in Simone’s script that Pasarin’s art gets to shine in those panels, and I have little doubt that this series is even close to slowing down.