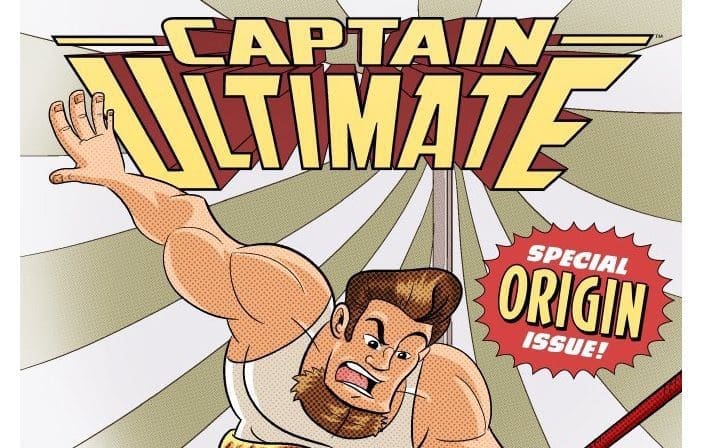 NOTE: Captain Ultimate is a monthly series published through Monkeybrain Comics and is available digitally on Comixology for $.99 an issue. There is no print release for this series…yet.

There are comics that are great, comics that are fun, and comics for all-ages, but in a Venn diagram of the current marketplace, there’s hardly a title that is a union of all three qualities like Captain Ultimate. It’s a rare title that places heroism in the hands of a purely do-gooder, a mustachioed muscled superhero that teaches important lessons as he dishes out good old-fashioned justice. In Captain Ultimate #3, series writers/creators Joey Esposito and Benjamin Bailey provide an origin tale for their eponymous hero comprised of the same wit and feats of unmatched manliness the series has been known for, with a few unexpected twists. It also has professional wrestling and flying robotic alligators, so it’s a must-buy.

If you’ve ever heard either Esposito or Bailey talk about comics before, their love for a now forgotten golden age of comic books is slathered on every digital page of Captain Ultimate. This universe is set in a much simpler time, where phrases like, “superhero flim-flam!” or “tough rocks, pal!” make total sense and an honest-to-goodness newspaper reporter like Ricki Ratcliffe (complete with “PRESS” card in her hat) can give the editor-in-chief of the local paper the total scoop on Captain Ultimate’s humble beginnings. Given the chiseled physique of Captain Ultimate—or Nick Mason as we discover—it’s not a total surprise to learn he used to be a professional wrestler, though the decision to make him the heel (or bad guy) named Captain Carnage certainly lends more empathy to a guy that just wants to do good. Older readers that were wrestling fanatics of the 80s will love the depiction of the evil wrestling promoter; for the younger readers there are science fiction elements involving a belt of ultimate power created in the future and alligators that shoot laser beams. Everybody wins!

Drawn as if it were a comic strip in the Sunday newspaper, Captain Ultimate definitely appeals toward child-like sentiment in its overall look. Boy “Boykoesh” Akkerman’s pencils and inks lend to the lighter tone of the narrative, and the character designs are simple and fun. If there’s one nitpick to make it’s that the designs are a too simple at times, so much so that the editor-in-chief looks remarkably similar to the wrestling promoter. But Akkerman has a few nifty artistic compliments throughout the issue to keep the humor flowing, such as the milk mustache that Captain Ultimate wears as he is given the belt of ultimate power, or the odd assortment of folks in the crowd at the wrestling match. Captain Ultimate #3 is a short read but a good one, and in a climate where all-ages fun doesn’t always match up with quality, it’s a refreshing departure to a forgotten age of comics.