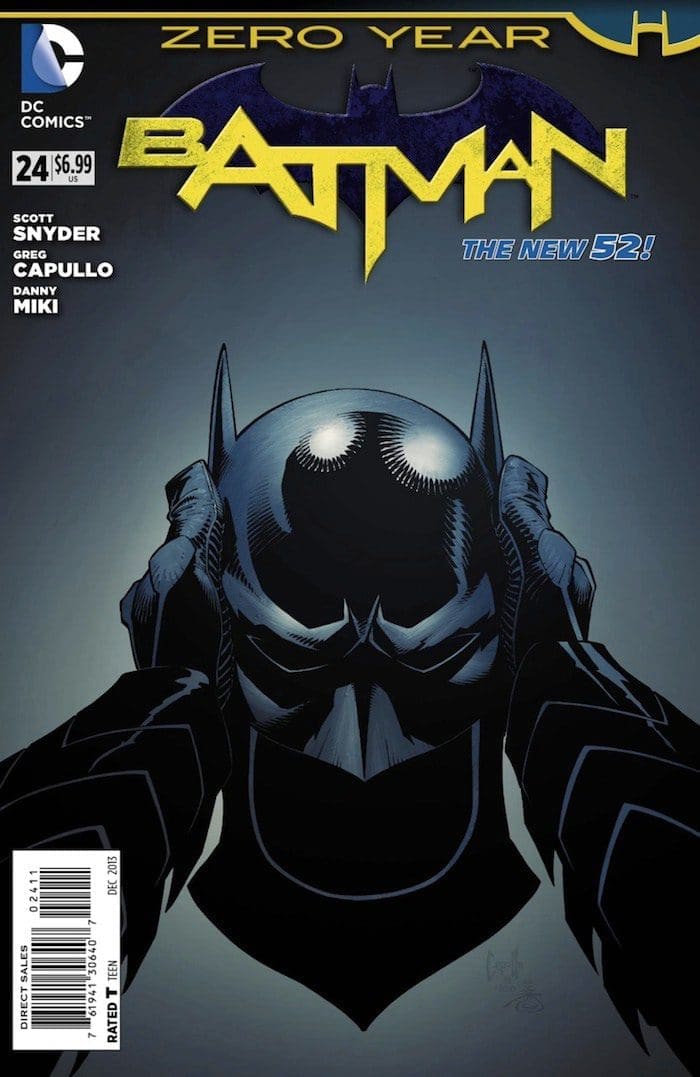 The first thing to notice about Batman #24 is its inflated price point and yes, it’s absolutely worth it. Batman is the most consistent top-quality comic of any major publisher on the market right now, and this double-sized finale to the first arc of Scott Synder’s Zero Year run solidifies that boisterous claim in spades. Even without the rest of the Zero Year issues to build upon, Batman #24 stands on its own as a sprawling epic; the storytelling is expertly crafted with some of the issue’s closing moments spilling into the realm of cinematic. Even at twice the regular asking price, there shouldn’t be a moment hesitation in picking this up.

Most of this Zero Year arc has been Bruce Wayne on the cusp of donning the cape and cowl but Batman #24 marks the first full appearance of the rudimentary batsuit first glimpsed back in the opening panels of issue #21. There’s a definite air of confidence to Bruce as he operates as the mythical vigilante to take down the Red Hood Gang, and the brashness of the young billionaire is still readily apparent when he tells the gang’s leader, Red Hood One, “you’re so full of #$%.” Outside the mask, Bruce, with Alfred acting as his Oracle-like computer support, is ever the calculating and meticulous detective, and the way he deduces the location of the Red Hood’s hideout just builds upon his moniker as the World’s Greatest Detective. Red Hood’s fate as this issue reaches its closing moments is not entirely unexpected given the climatic battle in the Ace Chemical factory, and part of me wishes for more creative freedom on Synder’s part to change what was inevitable. Yet just as he did with a certain renowned villain earlier this year, Synder plays into a lot of uncertainty, and leaves his own signature on this well-known chapter in Batman’s history.

Getting twice as much of Synder’s Batman also means getting twice as much of Greg Capullo drawing the character, and as usual, that’s never a bad thing. Capullo lends a deft touch to some of Synder’s more cinematic written moments, such as the stringing up of the Red Hood thugs in a familiar symbol or the aerial view of the pattern of Gotham City’s unexpected blackout. Not a single panel is put to waste because of Capullo’s attention to detail; even something as simple as a shot of Lieutenant Gordon blowing the smoke of his cigarette out his nose is able to carry the weight of that particular panel. One distraction exists in the art, however, and that is the sudden change to artist Rafael Albuquerque in the issue’s final ten pages. Albuquerque’s minimalist style clashes with Capullo’s established detailed approach and as a result, the closing moments feel more like a backup story rather than the start of the next chapter in this otherwise tremendous Zero Year arc.

THE WICKED + THE DIVINE CAPTIVATES READERS, FLIES OFF THE SHELF