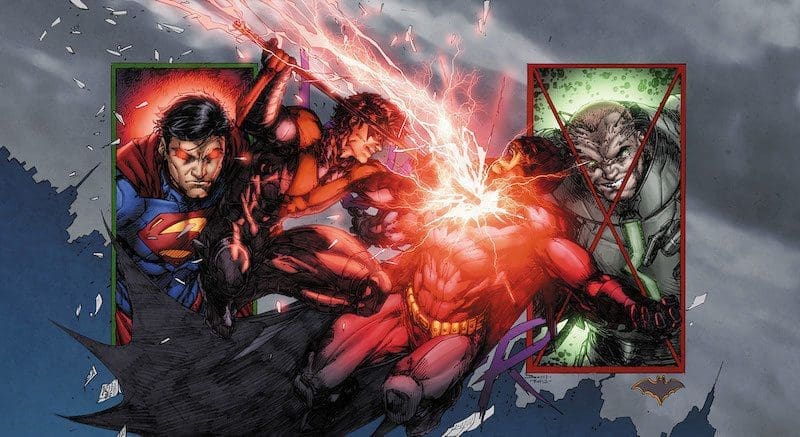 Greg Pak’s Batman/Superman has been weird but highly enjoyable right from the start but this issue is weird in a bad way. With Batman/Superman #5, Pak delivers a story that is somehow more confusing than his previous arc featuring shape-shifting trickster demons and multiple universes. It’s a pseudo send-up of video game culture featuring a new version of Toymaker that rather than skewering its subject, just reminds readers of the annoyances of online gaming personalities. My only hope for this brand new arc is that the villain that shows his face toward the end of the issue becomes the dominating threat, because otherwise this is not the Batman/Superman that I was hoping for.

This issue is not even the same brash Batman and naïve Superman from the issues before but now a modern-day version of the two heroes, thus stripping one of the big draws of the title away. Pak’s voices for the characters as their younger selves was fantastic, but as two older, supposedly-wiser heroes, to hear Superman use the word “troll” more than once is a serious head-scratcher. Most of the issue is still dominated with Batman and Superman’s frequent tête-à-têtes though the standout conversation of the issue is actually between Batman and Nightwing on the search for a missing Metal-Zero (aka Metallo). Throughout the issue characters are sucked into Toymaker’s latest version of an online game that allows players to inhabit real-life heroes, which leads to a jolting transition when Nightwing suddenly attacks Batman but then the two suddenly and somehow figure out where Toymaker’s base of operations is within the same page.

Batman/Superman #5 is also presented entirely in landscape format, which not only makes it a pain to read but artist Brett Booth doesn’t do anything compelling with it. I imagine this kind of orientation is meant to mimic playing a video game, but other than life bars appearing on the panels at times, there’s isn’t anything wholeheartedly alluring about the way this comic is presented. Booth’s art is great, and his first-page spread of half-Batman half-Superman is a demonstration of the consistent work he presents throughout the issue. He employs a nice visual touch where he draws the child-like avatars of the gaming personalities floating in bubbles peppered within the pages to represent their presence. If what these characters had to say was more interesting, Batman/Superman #5 could have been a fun pit stop after the insanity of the previous four issues, but instead I want the insanity back now.