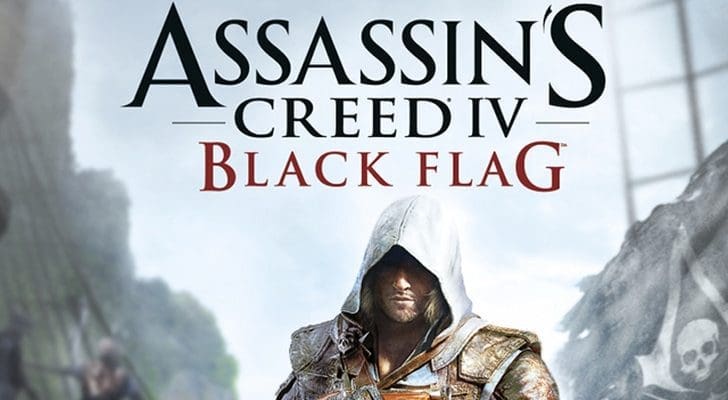 Ubisoft’s title, Assassin’s Creed has seen many transitions since its first game in 2007. Going from Syria, Italy, Colonial America, and now to the Caribbean. After much hype, an allure of pirates, and it being the first Assassin’s Creed game to go to the new the consoles. The question on everyone’s mind is, will Assassin’s Creed IV: Black Flag sink or swim?

Unlike the past games in the series, this one goes back in the time line. Taking place 50 years before Assassin’s Creed III, the game focuses on Edward Kenway, a pirate exploring the Caribbean. His goal is to make money, not wanting to live a peasants lifestyle, and make a name for himself. Edward is a likable character, dare I say, one of the most likable characters in the series. He is relatable. Instead of doing what he does for a greater good, or for humanity, he just wants to make a name for himself, and live a better life. Can we really blame him?; and, isn’t that a goal for many people?

The actual plot poses some interesting questions, especially after the ending of the third game (which I won’t actually reveal for spoilers sake). Abstergo continues to play a key role in the series, and more and more we get clues into the Templars and the Assassins.

The plot, while entertaining at times, does leave some things to be desired. The pirate theme, long wanted by fans, sometimes feels like it doesn’t fit in the series. It is a bit underwhelming, and perhaps, the most lackluster part of the entire game.
Plot : 3/5 Probably the best part of this entire game is the gameplay. After AC3 introduced sailing into the game, it felt a little clunky. AC4 takes that aspect, since it is the main part of the game, and tweaks it to make it run much smoother. Controlling cameras, steering, and powering the ship has become much cleaner, and doesn’t feel like a chore; something that was complained about in AC3. The foot controls have also been cleaned up.

Did I mention all the things available to do!? If you are like me, and like to stretch out a campaign, you don’t have to go from one main mission to the other. Assassin’s Creed IV offers plenty of side quests, collecting missions, and just exploring. Driving the Jackdaw and discovering random events, crashed ships, and lands, is at times more entertaining than the main story.

The map is bigger than we have seen in past games, and the locations are more diverse. You can go from city, to sea, to jungle environment, making it seem much more realistic, that you aren’t confined to just one particular setting.

Like in AC3, hunting, upgrading your ship, supplies, and armor is still the same. The mechanics that worked well in AC3, continue to work for AC4. Making it easy to keep progress of upgrades and access them.
Gameplay: 5/5

I’m just going to come out and say it, the voice acting and the musical soundtrack is fantastic. Perhaps, one of my favorite things is the sea shanties. Going around the map, you can find slips of paper that will contain a song on it. After capturing it, the members of your crew will give you a jolly tune as you sail around the Caribbean. I just thought it was such a clever and unique piece to add. Something so small can really add that much more to the game and the environment.

The voice acting was amazing as well. Matt Ryan, voice of Edward Kenway, plays his role with such a conviction to it, it feels natural. He plays his emotions well: he can portray his anger, his joy, his objectives well. He makes it known what he wants, and it shows all in his voice. The rest of the cast is wonderful as well, but Matt Ryan really is the shining star among the others.

The soundtrack, like the soundtracks of the past, is beautifully composed. Tweaking the main theme a bit to add a more Caribbean feel to it, it makes you long for the adventure you’re about to go on. The music matches the environment and adds to the situation even more as you fight, sail, and complete the main story objectives.
Sound: 5/5

Exploring the Caribbean has never been more beautiful. The graphics are next generation worthy, which makes sense, since the game will be on the new consoles. But, even playing on the PS3 I could appreciate the aesthetics Ubisoft was providing me with. The characters are well designed, their facial features have a lot of detail in them if you look close enough. But, most impressive is your ship. The detail put into the Jackdaw is amazing. The wood planks that make up the entire ship have texture to them. Your cabin as Edward is decorated, making it look like an actual person is living in there. The sails are gorgeous in the wind, and, it honestly just looks complete.
Graphics: 5/5

Assassin’s Creed 4 may not have the story of its predecessors, but, its gameplay and large map alone make it something to pick up. For fans, and first timers, AC4 is an experience, a game you can spend hours on even after the campaign has ended. It fits into the sequence of the others before it, though, it may not be the strongest. It brings its own pieces to the table, and brings new things that are more than welcomed.