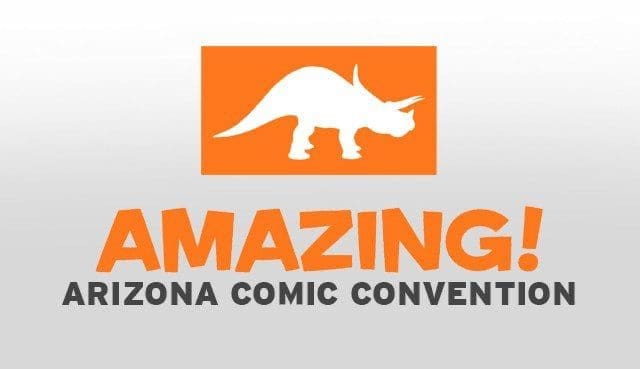 It’s almost that time again, we’re about to hit a new con season and everyone is picking and choosing which shows to attend. Personally for me, Amazing Arizona Comic Con has always been one of my favorite AZ cons. It gives off a feel of Phoenix Comic Con, but, is a bit smaller, easier to move around, and centered more on creators. Cosplayers bring some of their most beautiful work, seeing as it is a con during the peak of our winter weather in Arizona, and Amazing always seems to get a good group of guests to come entertain us.

Rob Liefeld is gearing up for the première of the Deadpool movie this coming year, and who better to talk to you about the Merc with the Mouth then his creator! Liefeld has also worked on the popular New Mutants and X-Force series for Marvel Comics. Liefeld even moved on from working as a freelancer and co-found the popular comic distributor Image Comics. Liefeld is pleased to attend Amazing AZ, and talk to fans about his legendary character! Take your chance to meet and greet with Rob at Amazing AZ 2016!

Talk about character creator! Please welcome Chris Claremont to AACC 2016! Claremont is known for making some of the most iconic characters in Marvel history! Those include, but are not even limited too: Phoenix, Gambit, Rogue, Kitty Pryde, White Queen, and Sabertooth! Claremont also worked on one of the most iconic X-Men comic arcs, The Dark Phoenix Saga. His spectacular writing even made it possible for X-Men favorite, Wolverine, to become a household name and the hero we all know and love today. When he isn’t working on writing comics, Claremont also helps translate are favorite comic characters to the big screen. Currently he is helping with Age of Apocalypse, the new X-Men film. Do you love the Teenage Mutant Ninja Turtles? Then here is a guest for you! Welcome Kevin Eastman, creator of the Teenage Mutant Ninja Turtles! Eastman has been the man behind the pop culture phenomenon since its beginnings in the 1980s. Working on the comics, video games, and cartoon series, Eastman even helped create some of the popular TMNT toys. Kevin will only be appearing Saturday and Sunday of the convention, so, make sure to check him out! He will be signing autographs, comics, and taking pictures with fans.

One of the nicest and most influential artists in comic book history, please welcome George Perez! George has worked on some of the most popular runs of DC Comics, including his amazing work on Wonder Woman, Batman, and helping create the legendary New Teen Titans along with writer Marv Wolfman. Perez has even worked on some of the biggest even series in DC, including the epic Crisis on Infinite Earths. Not limited to just DC, Perez has also given his talent to Marvel, working on the Infinity Gauntlet, which made Thanos one of the most recognized villains in Marvel’s comic history. Perez will be offering autographs and sketches for fans, make sure to meet one of the best artists in the field!

Welcome former Disney writer and artist Mat Nastos to AACC 2016! Nastos has had an incredibly impressive eclectic portfolio. Working on horror films and sci-fi novels, Nastos has also lent his talent to Marvel and DC as an artist. He has also helped Disney out with one of their most popular cartoons, with both kids and adults, Phineus and Ferb! Along with that, he has worked on the iconic Disney film, The Emperor’s New Groove. Nastos will be at the convention all weekend, and will even be offering free sketches to kids all day on Sunday!

Jim Zub may be a new comer, but he’s got a whole lot of talent, and he’s bringing it to AACC 2016! Zub is a writer for UDON and a producer of Street Fighters. Along with that Zub has worked on some of his own material from Image Comics, including Skullkickers and Wayward, both fantasy adventure titles.

Amazing Arizona Comic Con 2016 will kick off Friday, February 12th, and goes till Sunday, February 14th. It will be at the Phoenix Convention Center on 100 N 3rd st. Times of operation are Friday 3pm to 8pm, Saturday 10am to 7pm, and Sunday 10am to 6pm.