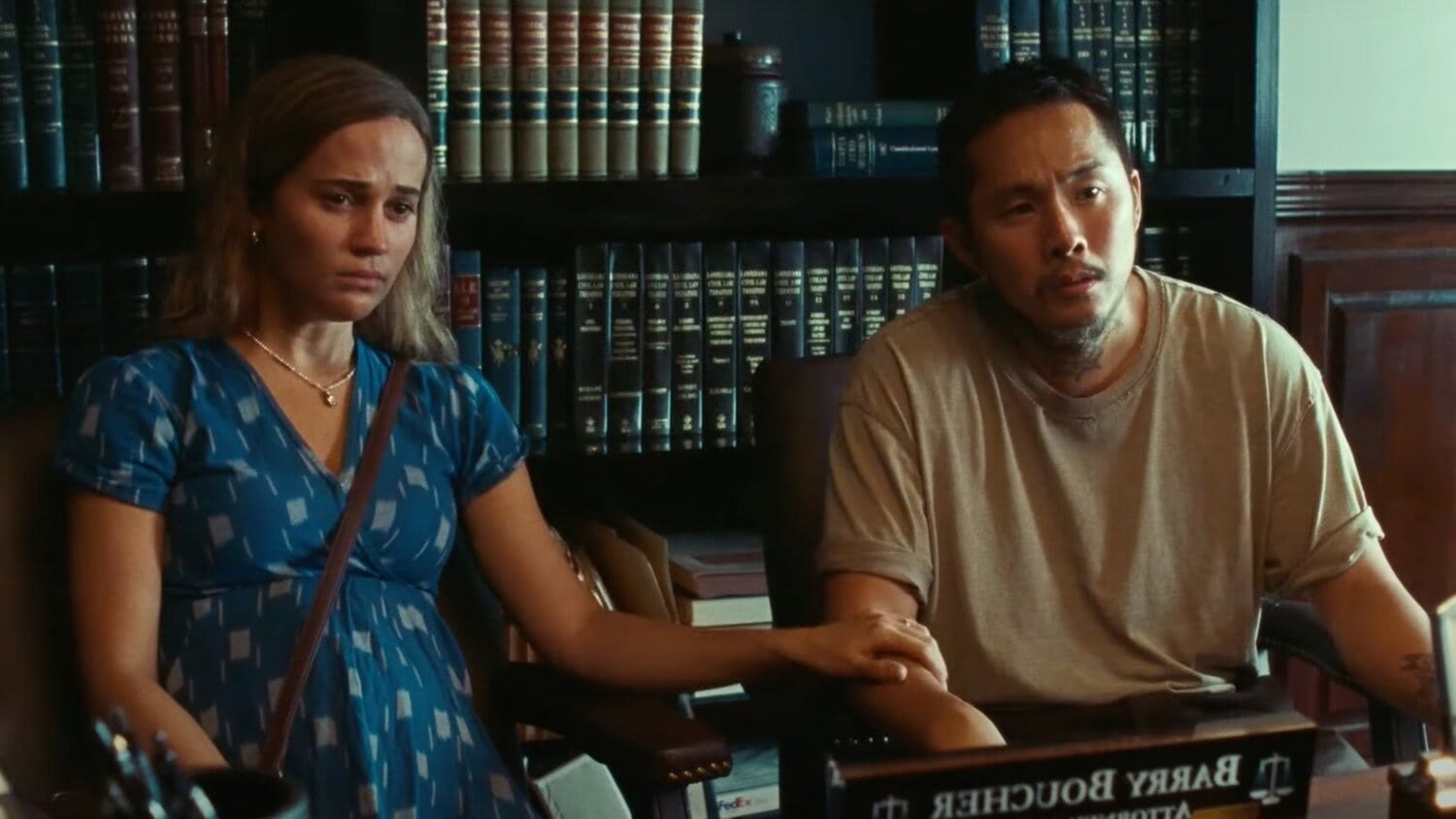 Awards season is officially upon us, and one of the first theatrical entries is Blue Bayou from writer, director, and star, Justin Chon. The multi-talented auteur is no stranger to the awards circuit, as his previous features, Gook and Ms. Purple both have won several awards, and it looks as though Blue Bayou will likely add to that mantle. It’s a film that deals with an aspect of the immigration crisis that most Americans tend to ignore. Let’s take a closer look at our Blue Bayou review.

Blue Bayou follows the story of a Korean immigrant, Antonio LaBlanc (Justin Chon). He was adopted as a toddler, then shuffled through the system for years. The film catches up with Antonio as a married man with a child on the way. His wife, Kathy (Alicia Vikander), has a child from her previous marriage, Jessie (Sydney Kowalske). While Antonio and Kathy have a positive relationship, their marriage is strained due to Kathy’s ex, Ace (Mark O’Brien), who is a local New Orleans police officer.

In addition to Antonio’s turbulent childhood, he has multiple non-violent felonies and difficulty finding good work. Amidst this struggle, Ace and his partner Denny (Emory Cohen) make trouble for Antonio, which draws the attention of the U.S. Immigration and Customs Enforcement agency (ICE). To summarize, Antonio has issues with work, issues at home, and issues with ICE, which places him in a very difficult situation.

While Antonio was legally adopted as a toddler, he was never given proper US citizenship. This is an issue for a large number of immigrants who were adopted in the 80s and 90s. Blue Bayou paints the picture of a troubled but kind-hearted immigrant. He has a family just outside of New Orleans but faces deportation back to Korea. He has a thick southern accent, doesn’t speak Korean, doesn’t know anyone in Korea, and has spent virtually his entire life in the US.

Blue Bayou is a film that helps shine a spotlight on this growing problem of viciously uprooting immigrants who have only known life in the US. While the movie very accurately depicts this issue, it’s also a film about life, death, and living. Antonio meets Parker (Linh Dan Pham), a Vietnamese refugee with terminal cancer. She represents death, while Antonio’s unborn child represents life, and Antonio himself represents living.

The film is emotionally charged in many ways. Antonio’s immigration issues, his estranged relationship with his foster parents, the relationship with his wife, and his growing relationship with her biological daughter. Then you have all of Parker’s issues and everything she brings to the film and her friendship with Antonio. There are a few aspects of the film that feel in place specifically to provoke an emotional response instead of simply serving the narrative, but overall there’s a lot of genuine emotion to be had throughout Blue Bayou.

What really makes the film work is Justin Chon’s writing, directing and acting. The script is sharp and the plot is fluid with the highs and lows of the various events Antonio goes through. One moment Antonio is creating a lasting memory with Jesse, and the next he’s getting assaulted by police officers. It can be difficult to find a satisfying balance between those peaks and valleys, but for the most part Blue Bayou walks that line well. It delivers an important and timely message right alongside a dramatic triumph.

Synopsis: As a Korean-American man raised in the Louisiana bayou works hard to make a life for his family, he must confront the ghosts of his past as he discovers that he could be deported from the only country he has ever called home.