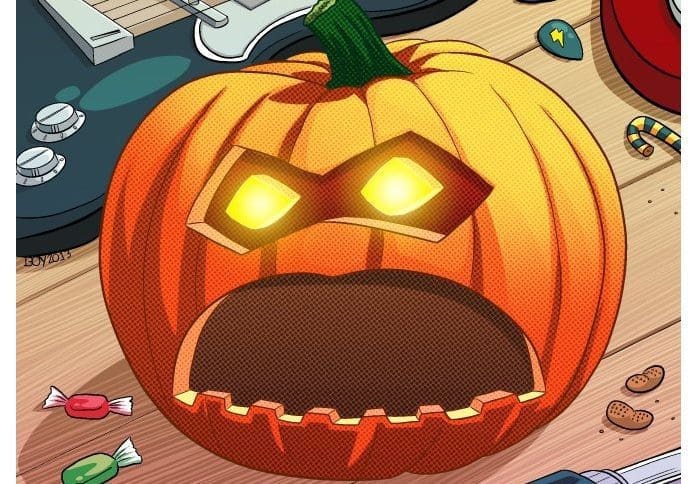 Halloween is often a showcase for the macabre and the grotesque, but Captain Ultimate #4 presents something far scarier: stolen Halloween candy! This trick-or-treat adventure is designed strictly to be a fun, carefree romp within a world of costumed kids and goofy, embarrassing parents. As always, Joey Esposito and Benjamin Bailey stir up a lot of nostalgia within these digital pages, and the issue is brilliantly capped-off with childhood Halloween photos of all the Captain Ultimate creators. It’s enough to create a longing for the lackadaisical childhoods of our past, when deciding which Ninja Turtle we wanted to be for Halloween was the hardest decision we had to make.

There’s charm in Captain Ultimate from the very first page as the front man of the wildly popular punk band, The Pumpkills (trademark this, someone!), croons, “We hate you! Goodnight!” to the adoration of the crowd. Celebrating their success with root beer and pizza isn’t enough, however, and the Pumpkills decide to steal candy from a trick-or-treating Milo and his friends, one of whom happens to be the cleverly disguised Captain Ultimate. Ultimate’s costume of a “mild-mannered reporter” is going for the obvious joke, but the fact that his costume only fools the bad guys is ripe for a legitimate laugh. Although plot elements from last month’s installment seem to be reserved for the next issue, Esposito and Bailey do manage to at least serve the ongoing narrative by suggesting that Milo may be becoming an official superhero sidekick soon.

Despite this issue mostly taking place under a moonlit Halloween night, Boy “Boykoesh” Akkerman’s art is always vibrant. His renderings of Milo, Captain Ultimate, and Ulti-Mutt are particularly strong this issue, and the touches that he includes to the neighborhood children dressed up for Halloween are fantastic. Even among renowned costumes like Batman, Wonder Woman, Dr. Who, and Dracula, Akkerman has a child dressed up like the Super Revenging Society’s Venus De Muscles, cleverly tying back into the Captain Ultimate universe. There’s even a reference to Monkeybrain Comics’ own Bandette character. Like reaching a hand into a bag full of candy, you can’t go wrong with Captain Ultimate on Halloween.