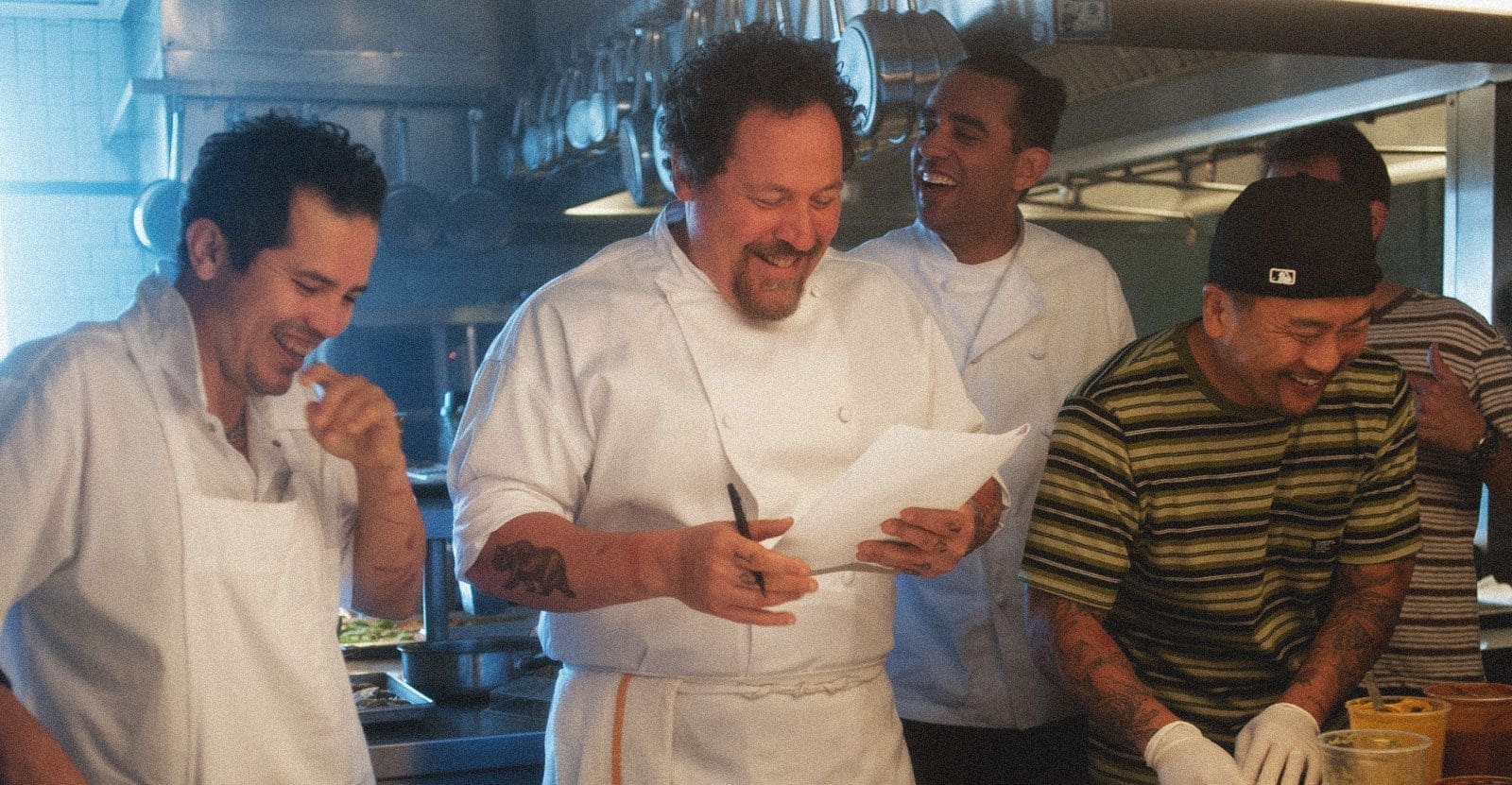 I should let you know before you consider seeing this movie that it would be a good idea to eat a nice meal before you do.  Nothing too fancy.  Something to tide you over while you periodically crave every dish in Jon Favreau’s latest film.

Chef tells the story of a man named Carl (Jon Favreau); who runs a kitchen at a popular restaurant.  He becomes stifled creatively by the owner, played by Dustin Hoffman, who, upon learning a food blogger is planning to attend, decides the standard old menu is the way to go.  The food blogger consequently destroys Carl’s reputation online and a war of words ensues which becomes viral.  A word he recently learns about by his son Percy (Emjay Anthony).  Carl eventually loses his job and sets out to try a new career path.  It ends up taking him to Miami where he buys a food truck and decides on selling Cuban sandwiches.

Carl’s family is the real center of this film.  His ex-wife Inez (Sofia Vergera) takes care of their son during the week and shows a real compassion for Carl as he struggles to find his feet.  Percy makes the most of a trying situation.  His father is always available to have fun, but is never really in the moment.  His mom, in fact , was the inspiration for getting them both to come to Miami and hang out over the summer.  Carl and Percy’s time spent working the food truck are a pleasure to watch.  Carl loves cooking and teaching his son the delicate art of constructing a beautiful meal.  Percy loves helping his father start a new dream.

The movie has a great supporting cast that includes Scarlett Johannson as a close friend and Bobby Cannavale as Carl’s sous chef in the beginning.  Robert Downey Jr. plays his ex-wife’s ex-husband who gives us an oh-so familiar Tony Stark-style banter that Carl sort of soldiers through in order to obtain the food truck.  John Leguizamo gives us a real gem of a character in Martin.  Martin works for Carl and provides some great humor throughout the film.

I can’t obviously write this review without mentioning the food once again.  The actors were clearly trained to create very intricate and delicious plates.  Just watching Carl construct a grilled cheese like it was the Mona Lisa made me want to get in the kitchen and try it myself.  The Cuban food is made with love and every city their food truck visits provides a new ingredient to add to their recipes.  A mix of local and exotic flavors the public eats up in person and online.

The film is a father-son bonding story on a road trip that happens to include a food truck.  It’s told in a very genuine way and Jon Favreau and Emjay Anthony show real chemistry building their relationship over time.  I recommend this to parents; who will relate to the disconnect we sometimes feel with our kids in this social network world.  Life is busy enough without spending the day informing the world about every little thing, but sometimes it brings you closer to what  matters most to you.  It’s overall a funny and clever movie that anyone will enjoy if you love seeing lots of tasty cuisine being made while a dad learns to live every moment with his son to the fullest.

Now if you’ll excuse me, I’ve got to find a nice Cuban restaurant to savor.  Perhaps one that shows movies like this one. There’s a brand of 3-D entertainment I can get behind.

Synopsis: A chef who loses his restaurant job starts up a food truck in an effort to reclaim his creative promise, while piecing back together his estranged family.