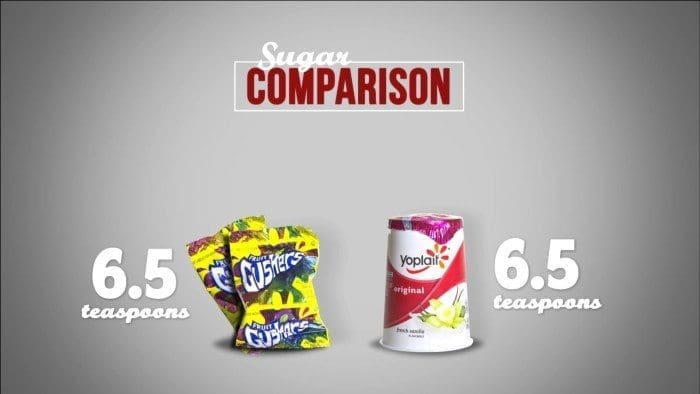 Since the documentary Super Size Me, filmmakers and food health advocates have tried many ways to get the message across that the food industry is not playing a fair game when it comes to giving the consumer an informed decision.  In fact, it has tried and succeeded in making us think that what we know and have been led to believe is enough to get us through our daily lives; that we shouldn’t worry so much about the root cause because exercise will save us all.  This new documentary hopes to peel away that positive message and explain that it really isn’t so simple as counting calories.

In the documentary FED UP, directed by Stephanie Soechtig and narrated by Katie Couric, the discussion put forth basically turns on its head the notion that eating less and exercising more is the answer to America’s growing obesity epidemic.  The idea that exercising the calories that you consume daily, no matter where those calories were obtained, is your answer to weight loss and healthy living.  The country’s obsession with ridding fat in their diets several decades ago caused the food companies to reevaluate their processing practices, and over a few years, figured out that they could substitute fat for sugar in their recipes. This made products on the shelves seem more appealing.  The downside is the body knows fat is fat, but it also knows sugar, once digested through the body, is also fat.  So herein lies the beginning of a new and more damaging problem.

The film provides several testimonies of teenagers who are obese and make a concerted effort to lose weight.  There is no dramatic change, since we are seeing a short period of their lives, but something is clearly hindering their performance besides just giving in to temptation at the snack bar every so often.  Having fast food sold at your school or the government telling you pizza and french fries are vegetables doesn’t help.  The teenagers in this film count calories and completely disregard or dismiss sugar content, which has a way of disguising itself under several different names.  Even exercise doesn’t make a dent in their health, but exercise is one part of a solution they hadn’t clearly understood up to this moment.  You can be fat and healthy; you can be skinny yet still fat on the inside.  It first comes down to those ingredients you consume.

Sugar is clearly the enemy in this film, but only because it is the go-to ingredient for so many products now.  The film cites studies of its addictive properties and how it grabs hold of children’s taste buds.  Once you try something that’s high in fat or sugar or both, you will tend to become drawn to that kind of food again and again.  Even as an adult it will be your comfort food.  Yet for all we know about sugar, and try to avoid excessive consumption, it’s everywhere; the food industry has done its best to conceal its whereabouts within the confines of the law.

The advertising of these sugary foods is also at the forefront of this documentary.  It mentions how cartoons in the 60’s were used to sell cigarettes, and even as recently as the 1990’s, we had cartoon characters as cigarette mascots.  We demonized the tobacco industry for this one and succeeded in framing that narrative to protect not only children, but the public in general.  We became informed and, almost in an instant, we started paying attention. Smoking dropped drastically.  When it comes to advertising junk food to kids, for some reason the food industry gets a pass.

Lobbyists and media pundits play a big role in this narrative citing free speech and denying a citizen their right to purchase as much soda as they want.  Although when you get down to it, if the customer was as informed from the get go about their food choices as they are about cigarettes and their harmful effects, would they be so inclined to indulge?  Perhaps they would anyway, but the manipulation of the healthy living narrative by the food industry is so distorted that an average consumer will just throw their hands up in the air, read the healthy whole grain and low fat label, and be too impatient to analyze its contents.

FED UP makes a point of laying the responsibility of getting the right message across with the food companies and the government; which so far has let the food industry send out their own message.  It doesn’t shy away from personal responsibility, but that has always been the argument from day one.  We are responsible for not working off that cheeseburger, but does the food industry really want you to?  The food and beverage giants have fast food vendors in public schools and also sponsor fitness programs.  It’s definitely a mixed message.  The biggest hidden treat is the nutrition label itself.  Nowhere on them will you see your daily intake percentage of sugar.  You will see how many grams, but if you ever found out how much of your daily percentage was there you would put that item right back on the shelf.

I have to say that I do feel responsible for what I put in my own body and I can be self destructive in that regard, but with so much being done to alter the chemistry of our food you do pine for more natural ingredients and more natural recipes.  Recipes that don’t require sugar at all.  I would suggest this film to not only help further the discussion of proper healthy eating; but to encourage you to share this with whoever wants to know more about the ever-growing story of our expanding waistlines.

Synopsis: Everything we’ve been told about food and exercise for the past 30 years is dead wrong.  FED UP is the film the food industry doesn’t want you to see.  From Katie Couric, Laurie David (Oscar winning producer of An Inconvenient Truth) and director Stephanie Soechtig, FED UP will change the way you eat forever.