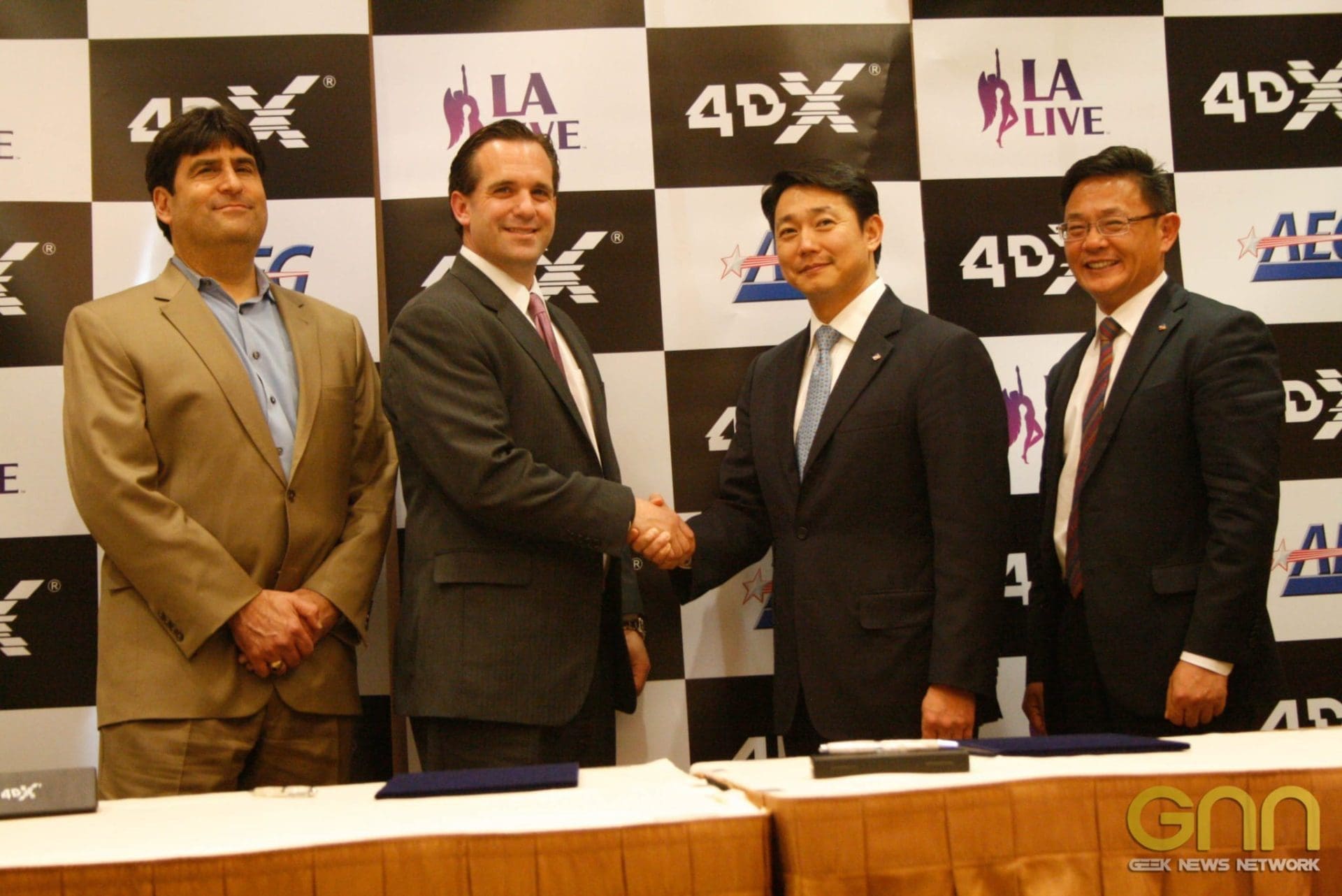 Seoul, Korea and Los Angeles – CJ 4DPlex, the world’s first 4D cinema company for feature films, announced today at CinemaCon that they have signed a deal with AEG to bring 4DX technology to a movie theatre in the United States for the first time. After an incredible expansion to several countries in the world including Japan, Taiwan, Chile, Colombia, Croatia, United Arab Emirates and many others, this cinema experience is coming first to the entertainment capital of the world when it premieres its first blockbuster film this summer exclusively in the AEG-owned the Regal Cinemas L.A. LIVE Stadium 14 theatre in downtown Los Angeles, Ca.

“Los Angeles was the natural choice for the first U.S. location to carry 4DX. We wanted to bring this experience to where all the movie magic happens,” said Byung Hwan Choi, CEO of CJ 4DPlex. “With AEG, owner and host of the world’s most exciting entertainment venues as our strategic partner, we are very much looking forward to welcoming our audiences to a movie-going experience never before seen in the U.S. as befits the state-of-the-art theaters at L.A. LIVE!”

CJ 4DPlex is showcasing the next generation of its 4DX technology at CinemaCon this week, March 24-27 at Caesars Palace in Las Vegas, CinemaCon is the largest and most important gathering of movie theatre owners from around the world. This 4D effect cinema solution will be on display in a mini-theatre at Booth #2003A in the Augustus Ballroom.

“AEG is excited to partner with CJ 4DPlex to bring the 4DX technology to America” said Nick Baker, Sr. Vice President AEG Global Partnerships. “We are always looking for leading edge technology and innovative products and amenities to introduce at our entertainment destinations and, this will inspire and encourage people to descend upon L.A. LIVE.

“In just a few short years, Regal Cinemas L.A. LIVE Stadium 14 has become not only the preferred location for blockbuster releases but the ideal venue to showcase the industry’s newest exhibition technology so, it makes perfect sense that this revolutionary process to be unveiled here first,” said Shelby Russell, Vice President, L.A. LIVE Marketing.

Since debuting with a 4D screening of Avatar in 2010, more than 14,000 4DX seats are now operating in 91 theatres in 23 countries – opening on approximately one new screen every two weeks as theatres recognize the power of being able to offer a wider range of formats and experiences to moviegoers. In fact, in 2013 alone, 4DX was installed for the first time in 14 countries – Bulgaria, Chile, Colombia,Croatia, Czech Republic, Guatemala, Hungary, Indonesia, Japan, Poland, Taiwan, Ukraine, the United Arab Emirates and Venezuela – with 47 new screens compared with 13 openings in 2012.

CJ 4DPlex is the world’s first 4D cinema company for feature films. Headquartered in Seoul and with international offices in Los Angeles and Beijing, the company provides 4DX cinema systems for exhibition partners along with 4DX codes of major Hollywood titles. Each auditorium incorporates motion-based seating synchronized with over 20 different effects and optimized by a team of skilled editors, maximizing the feeling of immersion within the movie. A visit to the 4DX brings a virtual journey through an all-encompassing experience not limited to just audio and video. 4DX presents an all-five-senses immersive cinematic experience allowing everyone to connect with the movie and experience special effects through motion, wind, fog, lighting, and scents that enhance the visuals on-screen. Since 2010, more than 100 Hollywood titles were showed with 4DX. As of today, there are more than 14,000 4DX seats across 91 sites in 23 countries. For more information, please visit: Homepage: www.cj4dx.com / Facebook: www.facebook.com/4dplex

Regal Cinemas L.A. LIVE Stadium 14 is one of the nation’s most state-of-the-art and technologically advanced theatres with all 14 auditoriums featuring stadium seating, digital projection and sound systems along with high-gain screens, high-back reclining seats and retractable cup holders guaranteeing the ultimate comfort for the best movie experience. Opened in 2009, Regal Cinemas L.A. LIVE Stadium 14 also features the Premiere House, an 800-seat theater with a private entrance and lobby in addition to a grand spiral staircase leading to the Premiere House’s balcony level. Including the Premiere House, six of the auditoriums are equipped with RealD 3D technology. As the West Coast “flagship” of Regal Entertainment Group, the nation’s largest movie exhibitor, the theatre is located within L.A. LIVE, the $3 billion sports and entertainment district located in downtown Los Angeles.