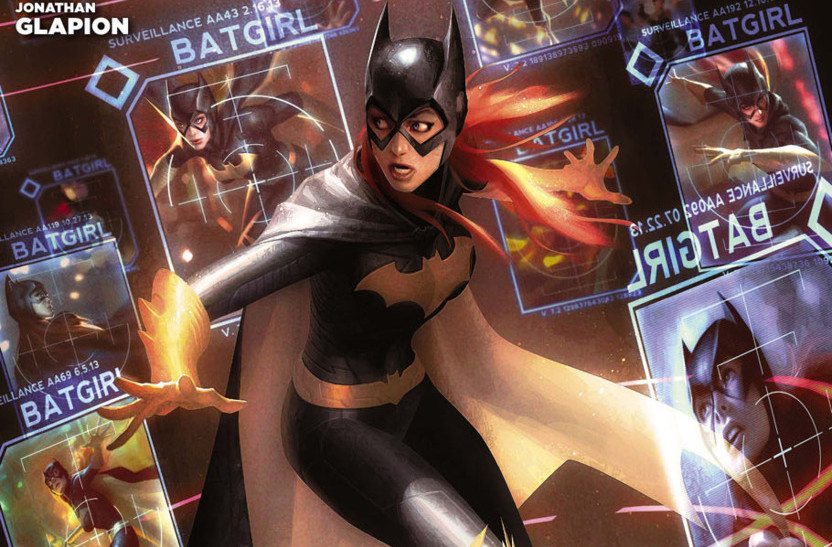 Reading Batgirl #32 feels like a massive change is afoot, be it as minor as a change in locale for Barbara Gordon or as major as the beginning of writer Gail Simone’s swan song for the series. Maybe I’m reading too much into it but the signs in this issue are telling:  Batgirl is finally fed up with Gotham and what the city has done to her and her family, she’s poised for a final confrontation with her arch nemesis Knightfall, and of course, there’s the sudden appearance of characters from Batgirl’s past who, knowing it’s Simone writing this, are doubly meaningful. Simone has been railing on Batgirl hard for a while now and with Batgirl #32, Simone seems to be pushing her character to her absolute breaking point. Batgirl no longer has the GCPD to depend on (due in large part to the new commissioner) and her kinda-sorta boyfriend Ricky is another tragedy away from ridding his life of his kinda-sort girlfriend for good. While I’m still not entirely convinced that Fernando Pasarin is the best artist for this kind of material, the moments in this issue where Batgirl loses her cool are drawn exceptionally well, especially a brutal teeth-shattering punch that she throws within the first few pages. It’s the way Pasarin draws his characters’ faces that is still the biggest deterrent to this book, however, with a general identicalness to each face—both male and female.

Here’s a shocker:  Detective Comics #32 promises a fight between Batman and Giant Squid on its cover and it delivers on that promise in spades. Granted, the issue is still embedded in the case of Elena Aguila’s death from two issues ago, and while I don’t feel as though we’re closer to discovering the culprit behind the murder, the fact that Batman willingly jumps into a tank with a Giant Squid shows how invested he is in solving this case. On the other side of the law is Harvey Bullock, a character that under Brian Buccellato and Francis Manapul’s script, is becoming uncomfortably likeable. Never before have I cared to know what Bullock’s home life is like but after seeing a two-page spread of him at home, I’m invested. Buccellato and Manapul also manage to fit Annie Aguila, the daughter of Elena, into the plot, securing her as an interesting wild card. Manapul’s art is still as spellbinding as ever, with the sequence of Batman squaring off with a Giant Squid an obvious highlight to an issue that looks impressive from start to finish. It goes without saying that Detective Comics is gradually ascending the ranks in my personal favorite Batman books.

For the last twelve months, writer and artist Richard Corben has established a foothold in the market of adapting the stories of Edgar Allen Poe to medium of comic books. Morella and The Murders in the Rue Morgue is the latest in this line of adaptations, offering the two classic Poe short stories indicated by the title of the one-shot. “Morella” is the first and arguably inferior story of the two, hindered severely by the fact that Corben doesn’t have enough pages to convey the proper themes of the work or motivations of its characters. “The Murders in the Rue Morgue” fairs much better than its predecessor with Corben managing to pull the reader into this tense murder mystery and become fully immersed in all its intricacies. You can easily see the influence that “The Murders in the Rue Morgue” would later have on the creation of Sherlock Holmes and other characters of that same ilk. Corben also supplies the art on the entire one-shot and his renderings, as expected, are very macabre. There aren’t a lot of details to be had in each panel but the emotional resonance of each action is presented throughout, maintaining the impact of Poe’s original work.

Having now spent three issues with Jeff Lemire’s Justice League United, I’m beginning to see it as a sort of Star Trek-esque escapade, and it’s growing highly enjoyable. Seeing heroes from our earth thrust into the outer reaches of space to act as intermediaries for two warring alien races provides an interesting variation on the Justice League formula. Justice League United #2 provides a heaping of information on the conflict our heroes have been transported in the middle of, so much information in fact that it’s a wonder why Lemire didn’t include some of it in the prior issues. Being a very expository issue, Justice League United #2 has much less time for its heroes though the continued squabbling between Animal Man and Green Arrow remains hilarious throughout. Meanwhile, the inclusion of Hawkman and Lobo still baffles me although the issue does give a reasonable explanation as to why the two are involved. Even still, I would rather spend the time with the actual League especially now that Supergirl has joined the ranks. Mike McKone’s art is improving but it’s definitely not the draw of this book, no pun intended. Supergirl’s arrival manages to get an impressive full-page spread but the majority of the action is confined to small panels at weird angles, which isn’t helping the art stand out as much as it should.

Marvel has decided that it no longer wishes to receive hundreds of thousands of dollars each month so they’re finally killing off Wolverine, starting with writer Paul Cornell’s brand-new arc, “3 Months to Die.” Wolverine #8 marks the first chapter in this not so subtly named storyline and while the title sprawled across the book’s cover is sure to draw the attention of new readers (like myself), the issue itself is not entirely new reader friendly. Where I could easily get into Wolverine’s travels with kung-fu masters Iron Fist and Shang-Chi to an island featuring the Temple of Death on Holiday (catchy name!), that’s unfortunately only half the contents of the book. The other half is imbued in Wolverine’s past conflicts, focusing on Sabretooth (who I know), a crime boss named The Offer (???) and one of his crew and former love of Wolverine, Pinch (?!?!). Cornell doesn’t provide a particularly compelling scenario involving the villains, so I left the issue not knowing much about The Offer or Pinch and not caring that I didn’t know. Fortunately, Kris Anka’s art is engaging to look at with each panel and David Curiel’s warm colors allow that art to truly stand out. Even when the narrative didn’t particularly rivet me, the art constantly impressed me.