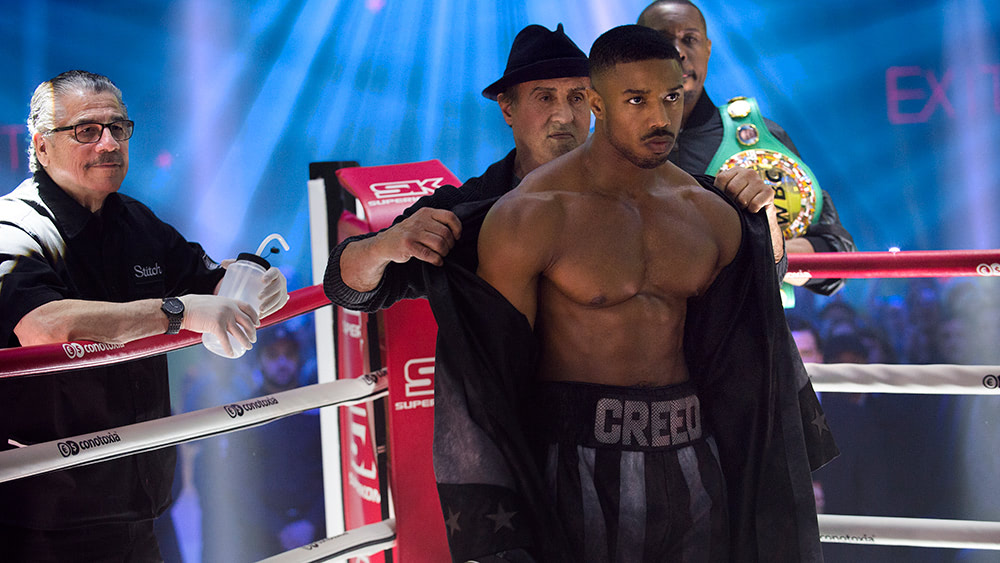 The Rocky series has been going strong since 1976. It was revitalized in 2015 when Ryan Coogler directed Creed, a film that followed the son of Rocky’s rival and friend, Apollo Creed. The film was a breakout hit that gave people a taste of the original Rocky films, while refreshing the formula for the modern moviegoer. Three years later, we now have Creed II, but without Ryan Coogler in the director’s chair the film suffers a bit. Find out how the sequel turned out in our Creed II review!

In Creed II, Adonis Johnson (Michael B. Jordan), son of Apollo Creed, is challenged by Viktor Drago (Florian Munteanu), son of Ivan Drago (Dolph Lundgren). The film plays out like a classic 80s underdog story, with Rocky (Sylvester Stallone) and Adonis having to deal with the events of Rocky IV. Adonis feels the need to avenge his father’s death at the hands of Ivan, while Rocky still feels guilty for not throwing in the towel and stopping the fight before Apollo was lost.

On the surface, the pseudo-revenge story sounds appealing. However, the premise is poorly executed. It doesn’t help that two more story lines are thrown into the mix, with Adonis’ girlfriend Bianca (Tessa Thompson) trying to launch a music career and start a family, and Rocky trying to reconnect with his own son. You need some of these pieces to add more depth to the story, but none of this was executed well, and the film grinds to a halt during most of these scenes.

Both Creed films follow a similar formula to the Rocky film series. The main draw is the big fight, or in some cases, multiple fights. However, what makes these films truly stand out are the moments between the fights that help to keep the audience engaged. The best Rocky films and the original Creed do this well. There’s enough going on between the fights to keep the audience interested. Unfortunately, that’s the biggest downfall of Creed II, with all of the extra plot lines slowing down the film instead of keeping the audience entertained.

While the pacing is an issue, the fights in Creed II are exceptional and help to make up for the problems between bouts. In many cases you’ll start to think you’re actually watching a live boxing match. The fights are fast, with visceral punches and high tension. You feel every blow thanks to some impressive editing and sound design. While nothing is quite as captivating as the single cut bout in the first film, the fights in Creed II are the best parts of the film by a wide margin.

The fights aren’t perfect, but they rise above the rest of the movie. In fact, because the fights are so riveting, the small flaws in each bout are all the more glaring. At one point the film tries to pay homage to Rocky IV, but it ends up deflating what could have otherwise been an epic conclusion.

All of these minor issues with the fights, as well as the bigger issues between fights can be attributed to the new director and the new writing team. Ryan Coogler’s fingerprints are all over the original film, which he helped to write. These same prints can be seen in Black Panther and Coogler’s other films and shorts. Creed II featured a completely new writing team, and a director who lacked a solid track record. The difference shows, which makes you wonder why the studio didn’t wait a bit longer so Coogler had time to handle Creed II after completing Black Panther.

While there are some issues with Creed II, and it falls short of the original, it’s still a fairly decent film to watch over the long holiday weekend. If there’s a third entry in the Creed franchise, hopefully the powers that be will get Coogler back and return the franchise to its former glory. In the meantime, Creed II is enjoyable, and the fights present an epic display of boxing on the big screen.

Synopsis: Under the tutelage of Rocky Balboa, light heavyweight contender Adonis Creed faces off against Viktor Drago, the son of Ivan Drago.