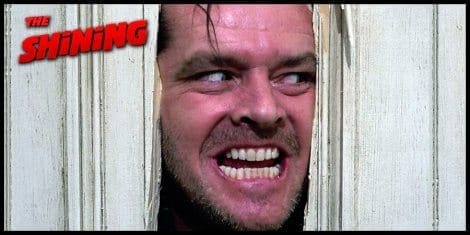 HEERE’S JOHNNY! Cult Classics, Phoenix,’s premiere revival theatrical screening series, brings back THE SHINING to the big screen for our March event on Saturday March 16th at 9:30pm at Pollack Tempe Cinemas! Stanley Kubrick’s 1980 adaptation of Stephen King’s horror novel is one of the best horror films ever produced and we want you to enjoy it with us on March 16th … after all, all work and no play makes Jack a dull boy!

Based on the best-selling Stephen King novel, Stanley Kubrick’s haunting adaptation stars Jack Nicholson in arguably his most iconic role as the winter caretaker of a mountainous snowbound hotel built on an indian burial ground that may or may not be haunted, Jack slowly goes mad and tries to kill his wife (Shelley Duvall) and son Danny, who possesses a psychic gift called “The Shining.” Come join Cult Classics for an evening of fun and scares!

General admission tickets are $11 and as usual we have a variety of premium ticket options:

We will have a special THE SHINING photo booth for the event featuring an actual ax-driven door for patrons to take pictures posing as Jack through the hatchet hole and a friend or significant other as his victim-to-be complete with prop axes and knives! Great for groups or couples. Costumes are welcome and encouraged!

We’ll also have giveaways, including a Kubrick Blu-Ray package prize from Cult Classics with 3 Stanley Kubrick films and raffle items and prizes from Zia Records and much more!

For any additional info, contact Victor Moreno at victor@cultclassicsaz.com

Brand new exhibit “A PIRATE’S LIFE FOR ME” to open at...

ELEVEN NEW DISNEY LEGENDS TO BE HONORED AT D23 EXPO 2019