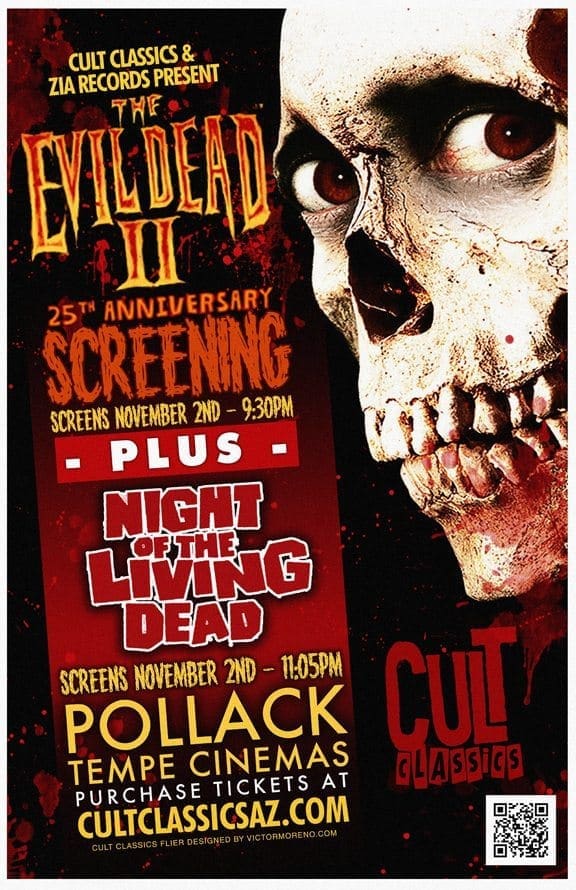 Prior to the screening, Cult Classics will present a pre-show consisting of vintage zombie and horror clips, plus other fun cinema odds and ends sure to please film fans of all ages, living or undead. We’ll also have giveaways courtesy of our sponsor Zia Records, with Zia gift cards and merchandise. Cult Classics will also be raffling off copies of EVIL DEAD 2 on Blu Ray, as well as EVIL DEAD 2 action figures, manufactured by NECA. Raffle tickets are free for all paid attendees!

The first 50 people at CINE DE LOS MUERTOS will also receive a complimentary gift bag, featuring items related to the film and other fun knick knacks. Previous Cult Classic gift bags have included film props such as a chinese food carton full of gummi worms for our Lost Boys screening in September, as well as a black and white striped bag for our Beetlejuice screening with Zagnut bars and a reproduction of the Handbook for the Recently Deceased from the film. Our Evil Dead 2 gift bag is sure to top them both! Line-ups begin at 8:30pm and no earlier.

Cult Classics will also have special art prints for the event for both EVIL DEAD 2 and NIGHT OF THE LIVING DEAD. Illustrated by 2012 Best of Phoenix winner, Victor Moreno, these art prints are limited edition and signed and numbered for the event. Online ticket buyers also have a chance to purchase a VIP Double Feature pass that entitles them to a 3rd special event print that will not be available for sale at the event – it will be printed to order for online ticket buyers!

Tickets are now available for sale at http://evildead2.brownpapertickets.com and at all valley Zia Records locations. More details are available at our website http://www.cultclassicsaz.com and on Facebook at http://facebook.com/cultclassicsaz.

Costumes are welcome and encouraged! This will be a Dia De Los Muertos you won’t forget!