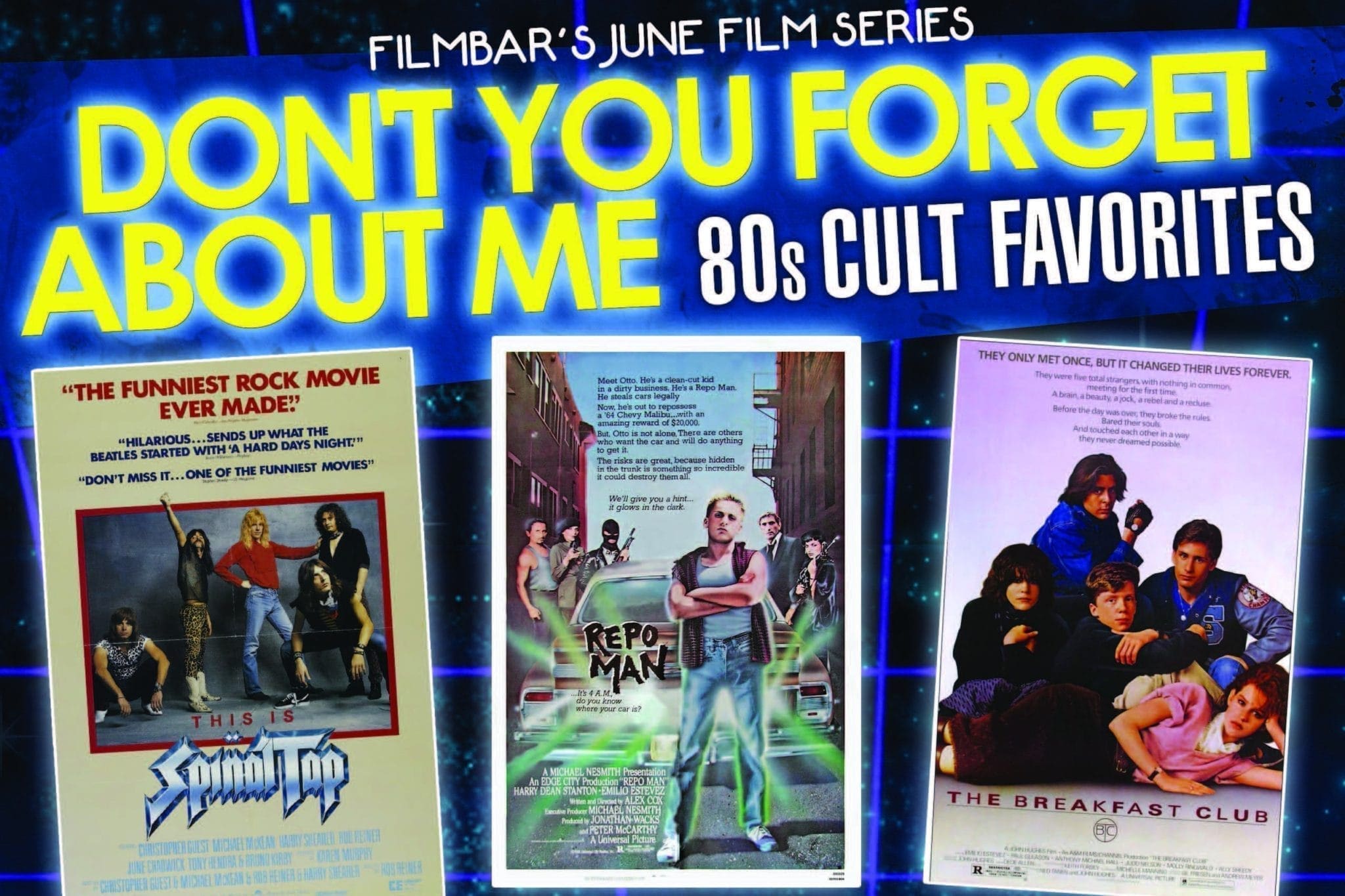 The Breakfast Club – John Hughes They were five students with nothing in common, faced with spending a Saturday detention together in their high school library. At 7 am, they had nothing to say but by 4 pm, they had bared their souls to each other and become good friends. To the outside world, they were simply the Jock, the Brain, the Criminal, the Princess and the Kook. But to each other, they would always be The Breakfast Club. June 2 & 4

Scarface – Brian de Palma One of the most influential gangster epics of all time, Scarface is the rags‐to‐riches story of Cuban immigrant Tony “Scarface” Montana, who finds wealth, power and passion beyond his wildest dreams ‐ at a price he never imagined. From acclaimed director Brian De Palma (Carlito’s Way) and Oscar‐winning writer Oliver Stone (Born on the Fourth of July). A modern‐day classic, Scarface stars Academy Award winner Al Pacino (The Godfather) in an unforgettable performance as one of the most ruthless gangsters ever depicted on film. June 6 & 13

Ghostbusters – Ivan Reitman Bill Murray, Dan Aykroyd, Harold Ramis and Ernie Hudson star as a quartet of Manhattan‐based “paranormal investigators”. When their government grants run out, the former three go into business as The Ghostbusters. When New York is besieged by an army of unfriendly spirits, conjured up by a long‐dead Babylonian demon and “channeled” through beautiful cellist Sigourney Weaver and nerdish Rick Moranis; The climax is a glorious send‐up of every Godzilla movie ever made. June 9 & 11 (AZ Ghostbusters Scheduled to appear June 11th and will be raffling off prizes for charity).

Stand by Me – Rob Reiner In a small woodsy Oregon town, a group of friends‐‐sensitive Gordie (Wil Wheaton), tough guy Chris (River Phoenix), flamboyant Teddy (Corey Feldman), and scaredy‐cat Vern (Jerry O’Connell)‐‐are in search of a missing teenager’s body. Wanting to be heroes in each other’s and their hometown’s eyes, they set out on an unforgettable two‐day trek that turns into an odyssey of self‐discovery. When they encounter the town’s knife‐wielding hoods who are also after the body, the boys discover a strength they never knew they had. Filled with humor and suspense, Stand by Me is based on the novella ‘The Body’ by Stephen King. June 16 & 18

Repo Man – Alex Cox A quintessential cult film of the 1980s, Alex Cox’s singular sci‐fi comedy stars the always captivating Harry Dean Stanton (Paris, Texas) as a weathered repo man in desolate downtown Los Angeles, and Emilio Estevez (The Breakfast Club) as the nihilistic middle‐ class punk he takes under his wing. The job becomes more than either of them bargained for when they get involved in reclaiming a mysterious—and otherworldly—Chevy Malibu with a hefty reward attached to it. Featuring the ultimate early‐eighties L.A. punk soundtrack, this grungily hilarious odyssey is a politically trenchant take on President Reagan’s domestic and foreign policy. June 20 & 27

This is Spinal Tap – Rob Reiner Acclaimed commercial director Marty DiBergi takes you behind the scenes for an intimate look at a band whose time has come and gone and come again and…. Through interviews, rare footage and lots of music including classic Tap tunes like “Big Bottom” and “Hell Hole” you’ll get acquainted with David St. Hubbins (lead guitar), Nigel Tufnel (lead guitar), Derek Smalls (lead bass) and every drummer who ever lived and died for this renowned rock band. Be a part of the sights, sounds and smells of this celebrated heavy metal phenomenon. It’s an experience you’ll never forget. June 23 & 25

Enter Sweepstakes for a chance to win screening passes to “The...