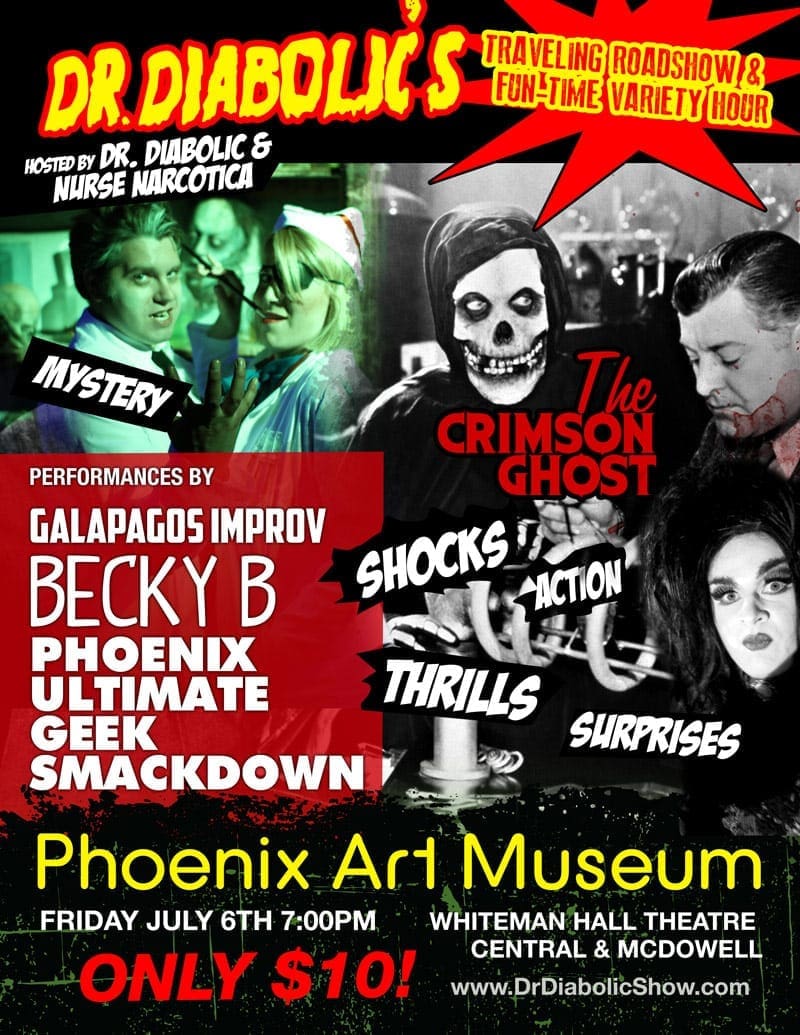 On July 6th at 7pm, during First Friday at the Phoenix Art Museum, Dr. Diabolic, Phoenix’s newest horror host will debut a new variety show in the Museum’s Whiteman Hall.  The show will feature live improvisational and sketch comedy, geek debates and outrageous movie clips.  Museum admission is complimentary.  Tickets to the variety show are $10 and will be available at the entrance to Whiteman Hall.  The event is open to all ages.

The show will be emceed by Dr. Diabolic and Nurse Narcotica who will be the audience’s hosts-with-the-most through an evening of performances by locals which include:

PUGS (Phoenix Ultimate Geek Smackdown):  The Ultimate Geek should be able to debate any topic on either side. During PUGS two people discuss a random topic and see who emerges on top by vote of the audience.  Neither contestant knows which side they will be debating, but can expect topics like:  Who has bigger daddy issues? Luke Skywalker vs. Batman.  Presented by Jeff Moriarty (Ignite Phoenix) and Jonathan Simon (Lightning Octopus).

The Crimson Ghost:  Enjoy the latest episode of this 1940s film serial.  A criminal mastermind known as The Crimson Ghost (The Skull Logo used by The Misfits) is out to steal a device called the Cyclotrode, which can short-circuit all electrical current on the planet.  It will be presented by Dr. Diabolic and Nurse Narcotica with additional live antics and theatrics.

Becky B:  Will perform her signature live comedy routine and stand-up.  The Local drag queen movie hostess whose, beauty will blend in well with the Museum’s artwork, and whose witty sarcasm is “par excellence!” Verging on NSFW, she’s the perfect addition to this freak show.

Galapagos Improvisation:  Devoted to performing long-form improvisation based in strong ensemble work, characters and scenes rooted in truth.  Whatever the specific form is, a single audience suggestion serves to inspire their exploration.  Galapagos are based out of the Torch Theatre. More Special Events for Saboten Con has been Announced!!