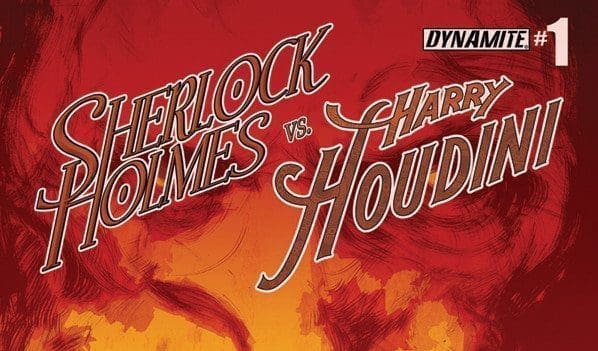 “Sherlock Holmes and Harry Houdini are two of the most fascinating characters of the last hundred-plus years.  Placing them together in the same world produces so many moments of mystery, intrigue, illusion, and reveal,” says Del Col, who then quips, “And that’s only during our research, in which Conor and I escaped near-death experiences while donning deerstalker caps.”

In Sherlock Holmes vs. Harry Houdini #1, famed detective Sherlock Holmes and brash showman Harry Houdini must combine forces to defeat a mysterious mystic dedicated to destroying Houdini’s career and killing anyone who gets in his way.  But despite their singular purpose, the two titans have too much professional pride between them… and it’s only a matter of time until the deadliest sin has them facing off.

Del Col and McCreery took the comic book industry by storm with their creator-owned Kill Shakespeareseries, launched in 2010.  In addition to their comics work, they each have found a string of success in diverse entertainment venues.  Del Col has worked in the music, film, and television industries, produced two independent feature films, and most recently assisted with the management of international pop star Nelly Furtado and her world tour.  McCreery has served in both creative and business positions for film and television companies, contributed over 1,000 stories and articles for media outlets, and also provided expert analysis for Canada’s Business News Network.

Conor McCreery says, “Working with Dynamite is a blast.  Their editorial team has proven repeatedly that they know how to make legacy characters like Sherlock Holmes come alive.  We couldn’t wait to get the chance to work with and learn from some of the best minds in comicdom.”

“I cannot say enough about both the characters and the creative on this series.  Sherlock Holmes is one of the most iconic fictional characters in the world, and an inspiration for other comic heroes.  Harry Houdini oozed charisma and was a brilliant man as well, as demonstrated by his penchant for debunking spiritualists.  The team-up of these amazing characters is perfect.  We’ve wanted to have this meeting of two great minds for years, but didn’t want to place the project on the schedule until we had the right creative team, and Anthony and Conor are that team.  They are intimidatingly smart… and you would haveto be to write Holmes and Houdini.  Anthony and Conor have proven how well they can handle historical literary characters, and now will add an iconic real-world character, Harry Houdini, to their resume,” says Dynamite CEO/Publisher Nick Barrucci.

Wolverine and the X-Men #36 Review