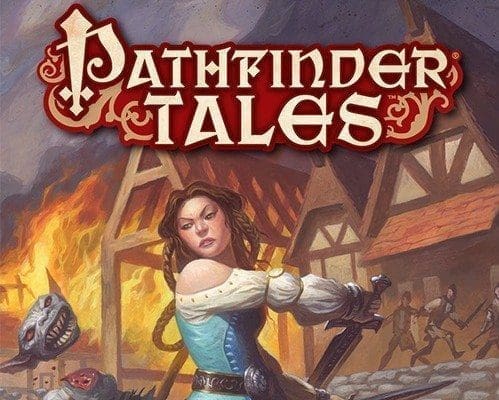 The Crusader Road is a new novel of frontier adventure set in the world of the Pathfinder Roleplaying Game, and the new Pathfinder Online MMORPG

Paizo Inc. announces today the release of Pathfinder Tales: The Crusader Road, the first Pathfinder Tales novel from New York Times Bestselling author Michael A. Stackpole. The Crusader Road is also the first tie-in novel for the forthcoming Pathfinder Online Massively Multiplayer Online Roleplaying Game, and the novel is available now as a mass-market paperback everywhere, and a PDF on paizo.com, as well as ePub via Apple’s iBookstore, MSRP $9.99.

When the artistocratic Vishov family is banished from Ustalav due to underhanded politics, Lady Tyressa Vishov is faced with a choice: fade slowly into obscurity, or strike out for the nearby River Kingdoms and establish a new holding on the untamed frontier. Together with her children and loyal retainers, she’ll forge a new life in the infamous Echo Wood, and neither bloodthirsty monsters nor local despots will stop her from reclaiming her family honor. Yet the shadow of Ustalavic politics is long, and even in a remoate and lawless territory, there may be those determined to see the Vishov family fail.

Michael A. Stackpole is the New York Times bestselling author of over 40 novels, including I, Jedi and Rogue Squadron. He’s won awards in the realms of podcasting, game designer, computer game design, screenwriting, editing, graphic novel writing, and novel writing. He lives in Arizona and frequently travels the United States attending conventions and teaching writing workshops. His website is stormworlf.com.

Pathfinder Tales are the official novels, novellas, and web fiction stories that explore the fascinating world of the Pathfinder Roleplaying Game, written by some of fantasy’s best-selling authors. Each Pathfinder Tales novel comes in mass-market paperback format, with new volumes released every two months. Subscribers receive a free downloadable version of each book they purchase, in both PDF and ePub formats. For more information, including sample chapters, visit paizo.com/pathfindertales. The Pathfinder Roleplaying Game is the world’s best-selling tabletop roleplaying game, in which players take on the role of brave adventurers fighting to survive in a world beset by magic and evil. The Pathfinder RPG is currently translated into multiple languages, with hundreds of thousands of players worldwide. Players need only the Pathfinder RPG Core Rulebook to play, but Paizo Inc. produces a wide range of books and accessories, from hardcover rules compendiums to complete campaigns to packets of beautiful, full-color maps. The Pathfinder brand has also been licensed for comic book series, graphic novels, miniatures, plush toys, apparel, and is being developed into a massively multiplayer online roleplaying game. For more information, please visit paizo.com.

Paizo Inc. is a leading publisher of fantasy roleplaying games, accessories, board games, and novels. Paizo’s Pathfinder® Roleplaying GameTM, the result of the largest open playtest in the history of tabletop gaming, is currently the best-selling tabletop roleplaying game in hobby stores. Pathfinder Adventure PathTM is the most popular and best-selling monthly product in the tabletop RPG industry. Paizo.com is the leading online hobby retail store, offering tens of thousands of products from a variety of publishers to customers all over the world. In the ten years since its founding, Paizo Publishing has received more than 50 major awards and has grown to become one of the most influential companies in the hobby games industry.