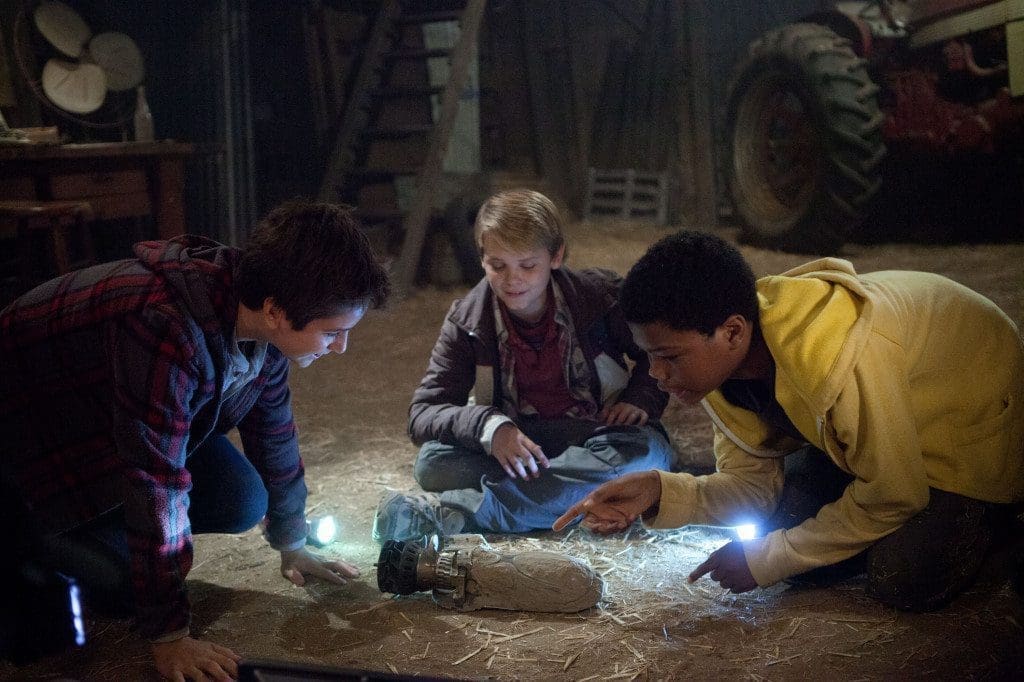 One of the aspects of a good family film is having some endearing and amusing young characters you can follow along with that bring you to a simpler time in your life; and perhaps complicate that life through amazing, wonderful adventures.  If that adventure happens to involve an alien trying to get home, all the better. While the premise is more than familiar, you will find the charm of the characters and the modern spin on the story to be very effective.

In the film Earth to Echo, directed by Dave Green, three best friends named Alex, Tuck, and Munch receive a strange signal on their smartphones in a certain area of their homes.  It turns out to be a map.  Since their neighborhood is set to be demolished by the state for a new freeway, the trio make the only choice they could by spending their last weekend together riding their bikes into the desert and investigating the strange image on their phone.  They eventually come across the creator of the signal, an alien they later name Echo.  Echo communicates through their phones and a series of sounds it can make on its own.  The boys determine through a round of twenty questions that this alien is trying to get home and needs to find parts of a key to activate its spaceship.  Alex(Teo Halm) develops a special connection with Echo since he has the added back story of being an orphan.  Little do they know, a certain government organization is also aware of the alien’s presence and is searching everywhere for it.

The movie is presented in a found footage format, but the events are being narrated by Tuck(Astro) a year after their alien encounter takes place.  The style is quite popular, but hasn’t been told with an E.T. premise until now.  Perhaps if Super 8 had a sequel in modern times, it would have gone this route.  It’s a very simple story too since it all takes place in about 24 hours.  What makes it work is the interaction of our young actors as they travel the city on their bikes.   The pieces of this unusual key are scattered about; and each place is not without its risk.  The bar scene is pretty funny.  They also have an interesting moment in one of their friend’s houses.  In fact later they do obtain a fourth member to their group in Emma(Ella Wahlestedt) who manipulates some adults away from this covert endeavor.  Having a female in their party adds some nervous and hilarious dialogue to the scenes.

If I was to describe the effectiveness of the alien, I would say Echo is very cute and not a robot, which they point out.  Even though parts of him, or her, seem robot like in some form.  Echo uses smartphones and other devices within its vicinity to help the boys in their mission across town.  As an alien in peril from the government, you do sympathize along with the boys and hope this all turns out for the best.

My favorite character is Munch(Reese Hartwig) who has some of the best lines in the movie.  His character was the boy genius who knows his way around all kinds of tech and seems to play the voice of parental reason when no actual parents are nearby.  He also seems to be one of the more developed characters.  All the other kids don’t carry their lines as strongly as Munch does at times, but when things get going, it is fun just the same.

Summing up this small, delightful film, I would have to say it’s a mix of E.T., The Goonies, and The Explorers, with a little Super 8 in there as well.  Not that it excels at any one of those films, but overall it’s a fun ride you will enjoy.  The young actors make the movie work.  The few plot holes are forgivable since they don’t go into Echo’s back story or his apparent extended stay on Earth.  Instead we have what I almost said out loud in the theater as the last Goonie weekend by three best friends.  They say goodbye to one another in grand fashion.  An unforgettable adventure on bicycles and an adorable alien with remarkable, gravity-defying powers.  Although with true friendship, and in this day and age, you’ll always stay connected.

About: Earth To Echo

Synopsis: After receiving a bizarre series of encrypted messages, a group of kids embark on an adventure with an alien who needs their help.