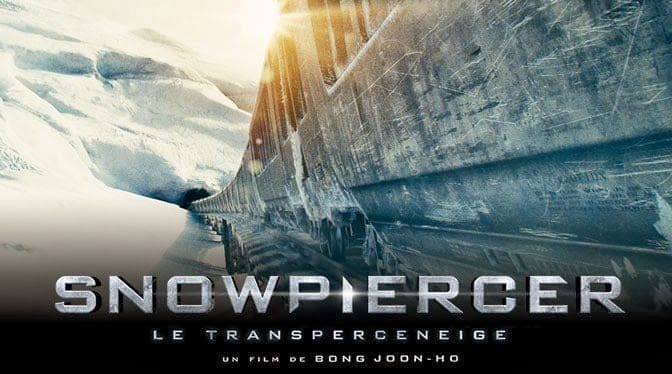 The road to the domestic release of Joon-ho Bong’s Snowpiercer has been a long one. There was a lengthy battle between the director and The Weinstein Company (TWC), who holds domestic distribution rights to the film. TWC wanted to release a version of the movie that was roughly 20 minutes shorter, while Joon-ho Bong obviously wanted his original cut released. That same original cut screened in several US cities to pleasing results, so it was always a curious decision by TWC to want a shorter version. Still, in the end we received the proper Joon-ho Bong cut, and it was a thrill to experience.

Before you can truly enjoy Snowpiercer, you first have to suspend your belief a bit. You have to be okay with the fact that what remains of humanity is locked away inside of a train that circles the globe once every year. As long as you can move beyond that piece of the story, everything else falls into place. It’s not that the movie doesn’t sell the ark-like train, it’s just that there are plenty of loop holes you could potentially find in the story if you start to look too closely at that initial fact. The movie plays much better if you let your mind go and just accept the train for what it is, a modern-day Noah’s Ark.

The story picks up in 2014 with global warming getting to a level in which drastic measures must be taken. Unfortunately, humanity screws up some calculations and the entire planet is covered in snow (basically The Day After Tomorrow, only considerably better). Our last hope lies in the Snowpiercer train, which now houses all that’s left of life on Earth. After this brief introduction to the story, things pick up nearly two decades later.

Every single bit of acting in this movie is perfectly on-point with how you would expect characters to react under the circumstances. The only exception could potentially be Ed Harris as Wilford, but his depiction of the character boils down more to personal preference, as opposed to how a character would react in his situation. Some will likely feel his character should have been more eccentric, while others will be fine with his calm demeanor.

Chris Evans is fantastic as Curtis, the main character throughout the film. There’s no Captain America here. This isn’t a Chris Evans you get to see much. He plays a leader, but he’s a very different leader when compared to Cap. John Hurt’s portrayal of Gilliam will make you wish his role on Doctor Who had lasted a little longer. He’s broken and damaged, yet bold and insightful at the same time. Even the thespians with smaller roles, such as Alison Pill as simply “Teacher,” really add to how well the movie plays out. Everyone has a role to play, and they all perform exceptionally well.

Without giving away any spoilers, the best way to describe Snowpiercer is by saying it’s a unique blend of Willy Wonky & the Chocolate Factory and the original Old Boy (not the recent American remake). While that may seem like an odd pairing, there’s really no other way to describe how crazy the film gets at certain points. There are quite a few parallels between Snowpiercer and the two aforementioned films, but it’s not a direct copy of either.

The only downfall of Snowpiercer is the ending. While it’s certainly not a bad ending, it’s the only aspect of the film that feels a bit out-of-place. Remove the last three minutes and you have what could be one of the best films of the year. As it stands, Snowpiercer is dark, deranged, and impactful, all while keeping a decent sense of humor. It’s one of those movies you need to watch, but you may not want to see it more than once. Think of it like Saving Private Ryan. That was a great movie, but all of the death and despair make it a film you don’t generally want to see often. Snowpiercer isn’t quite as demoralizing as that, but it’s in the same vein of not being for all audiences.

Synopsis: In a future where a failed global-warming experiment kills off all life on the planet except for a lucky few that boarded the Snowpiercer, a train that travels around the globe, where a class system evolves.