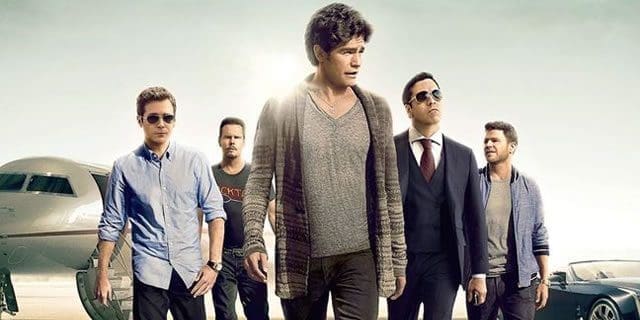 I didn’t start watching Entourage until the show was already finishing its seventh season. I was a little late to the game despite being a fan of other HBO shows such as The Soprano’s and The Wire. However, it didn’t take long for me to understand just how engrossing the show was and it quickly became my guilty pleasure series. It was over-the-top, debaucherous fun, and I thoroughly enjoy most of the series. I say most because I think we can all agree that the last few seasons weren’t the best the show had to offer.

As the time for the movie approached I went back to watch the series again so it was fresh in my mind. The characters evolved quite a bit from the first episode to the last, and the movie promised more of the same. Well, if you’re a fan of the Entourage series then you’ll be pleased to hear that the movie is essentially a 104 minute episode of the show. Think of the Entourage movie as shortened season nine, because that’s exactly how things play out.

The gang is back and almost everyone you’d expect to see makes an appearance in the film. It picks up literally a week after Vince (Adrian Grenier) and Sophia (Alice Eve) get married. I won’t spoil the outcome of the marriage, but let’s just say Alice Eve isn’t in the movie. The film uses a fictional exposé done by Piers Morgan to catch people up on what’s been going on, just in case you didn’t watch the show. It does a pretty good job of summarizing the major events of the last eight seasons into a quick five-minute piece, but it’s hard to imagine anyone unfamiliar with the show suddenly understanding everything with just Piers Morgan as a navigator.

After the exposé we’re off to the races seeing how everyone is handling the events of season eight and beyond. For the most part everything is just like you remember. Eric (Kevin Connolly) or “E” as most refer to him is dealing with his upcoming baby with Sloan (Emmanuelle Chriqui), Johnny Drama (Kevin Dillon) is still the butt of almost every joke, and Turtle (Jerry Ferrara) is basking in millions after the successful tequila venture toward the end of the show.

Of course Vince is the centerpiece of this as his next ambition is to direct a movie. Thankfully his former agent, Ari Gold (Jeremy Piven), now has a powerful role at a movie studio and can accommodate Vince’s new ambition. Things don’t go as planned, as you might have guessed, and we find the crew in familiar territory. It would’ve been nice to see the film head into new territory, but it’s still a natural progression from the series, even if not everything makes sense.

While the Entourage movie is essentially just more of the same, but this isn’t season nine. Instead of having nearly five hours to tell the story, the movie is just under two hours in length (and feels much shorter). It definitely makes the events of the film lack the weight they would have if given time to breathe over the course of 10 episodes. It also feels as though some plot points are rushed or shoehorned in just to make things more convenient.

To compensate for some of the issues with the film, everything is bigger this time around. The stakes are higher, the film within a film is bigger, the guest stars have bigger names and appear more frequently, and even a few of the series’ regulars are bigger (in terms of weight). Age is definitely starting to show, especially with the film supposedly taking place such a short time after the final season of the show. The only aspect of Entourage that isn’t bigger is Jerry Ferrara’s much smaller frame, which is mentioned multiple times throughout the film.

If you’re a fan of the show, you will enjoy the Entourage movie despite some of its shortcomings. It tries to offer some closure, but it doesn’t really succeed. Instead, it leaves you waiting for the next episode, expecting things to simply continue as they have been through the previous eight seasons. Yes, some of the events of the film have a sense of finality, but by no means does this feel like the end of Entourage. If the movie succeeds, there’s plenty of story left to be told, whether it’s a sequel ala Sex in the City, or a return to form on HBO (unlikely).

If you’re not a fan of Entourage, aside from some fun cameos there’s really nothing for you here. However, if you’ve never seen Entourage, this isn’t a bad place to start. You won’t have a detailed back story like fans of the series, but you’ll feel the camaraderie of the main cast and there’s plenty of humor going around as well. This isn’t the best we’ve seen of Entourage, but it’s certainly not the worst.

Synopsis: Movie star Vincent Chase, together with his boys Eric, Turtle, and Johnny, are back – and back in business with super agent-turned-studio head Ari Gold on a risky project that will serve as Vince’s directorial debut.