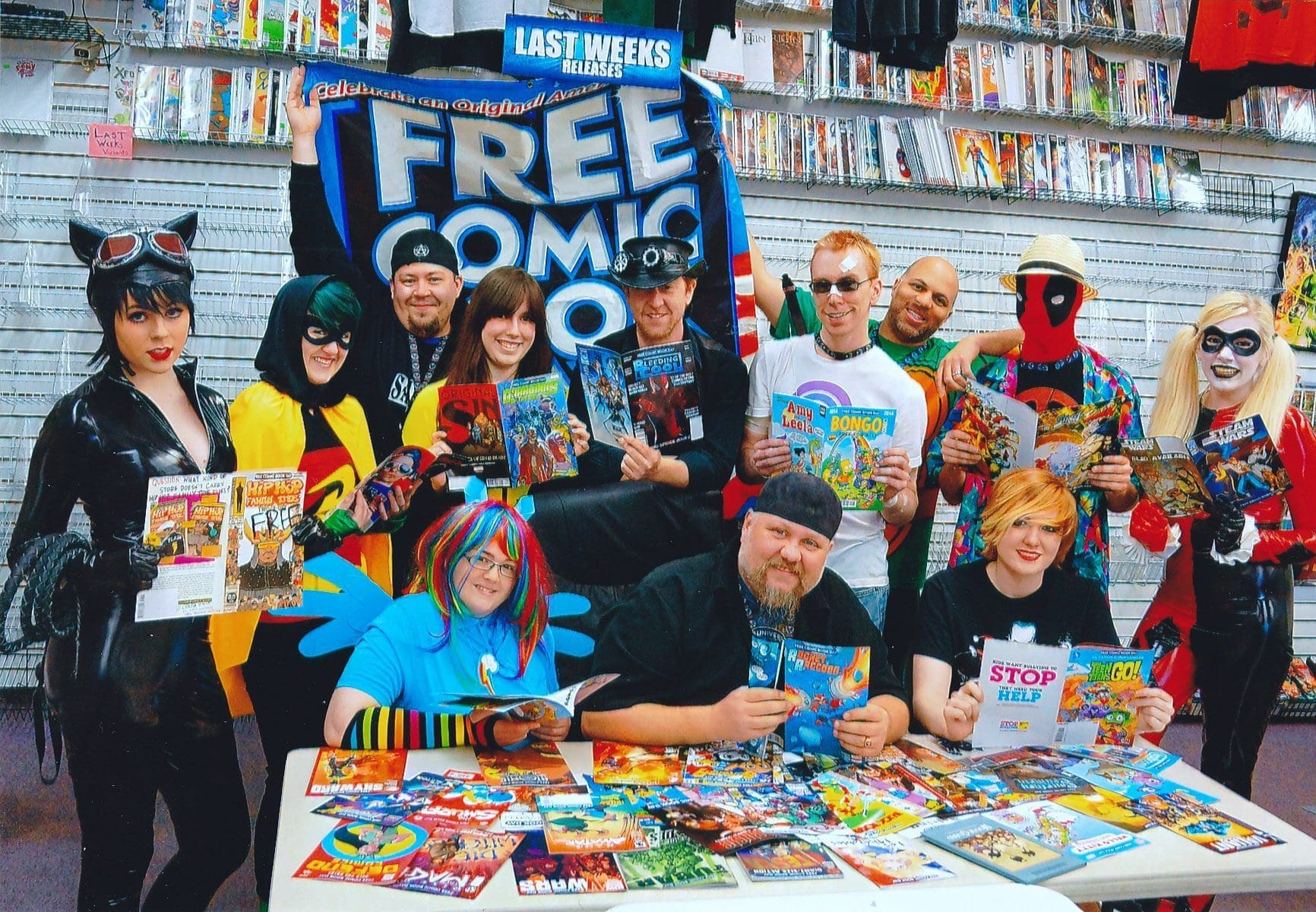 The first Saturday in May 2014 was a busy day for participating comic shops all over the world, as retailers gave away a record-breaking 4.7 million comics in over 2,100 different locations during Free Comic Book Day. Over 1 million comic fans gathered at their local comic shops to participate in the festivities and wait to get as many of the 60 free comics offered by 40 publishers this year.

Not only did Free Comic Book Day break attendance records in 2014, but it also generated a 45% increase in publicity than in 2013.  An estimated $3.2 million dollars in free publicity was created, from news articles in USA Today, L.A. Times, NPR, IGN.com, io9.com, Wired, CNET, in addition to 1,086 hits of coverage on local and national TV and Radio broadcasts. FCBD was picked up by major media due in part to the innovative marketing of a retailer who used three young men who tried to steal a comic shop prop and made them dress up as the Flinstones to promote the retailer’s Free Comic Book Day. Ultimately, Free Comic Book Day was covered by over 1,000 broadcast programs, and over 4,000 online news outlets.

Free Comic Book Day also spread virally throughout social media. This year over 108,000 tweets made reference to the event and on May 3rd, hashtags #FCBD and #FreeComicBookDay trended nationally from 8:30 AM until 3:00 PM on Twitter. A large part of this year’s promotion was also attributed to the growth of the FCBD Facebook page creating a 494% increase with 390,000 fans interacting with the page by continuously liking, commenting and sharing FCBD news with their Facebook friends. Their interactions helped give this year’s FCBD the most Facebook exposure, reaching over 6.5 million Facebook users from North America, United Kingdom, Australia and beyond.

This year shattered last year’s record with www.freecomicbookday.com having over 554,000 visit in the month of April and beginning of May. Also 490,000+ took advantage of the Comic Shop Locator that is designed to show potential customers where the local participating comic shops are in their area, generating a 115% increase in usage compared to 2013.

“Free Comic Book Day was a tremendous success this year,” said Jason Blanchard, spokesperson for Free Comic Book Day. “A large percent of participants celebrated FCBD for the first time and loved it! The fans were pleased with the variety of comics available and commented on the fact there were numerous kids comics, making FCBD an even bigger family-orientated event.”  “The best part about all the articles, links, and mentions about Free Comic Book Day was how many people it drove to our web site.”  “In total the comic shop locator had over 490,000 visitors. That’s almost half a million people that now know where their local comic shop is!” “Our hope is that the FCBD fans will continue to return to their comic shop to get more of what the comic industry has to offer.”

A major contribution in the growth of this year’s event is directly attributed to the innovative and creative approaches each retailer brings to their own comics celebration. “Comic shops were pleased with the large turnout as 40% of participating retailers said they had over 500 participants attend their event, with 87% of them rating their FCBD as extremely successful.”  Many retailers broke their own records by recording their best sales day in the history of their stores because customers didn’t come only for the free comics; they came to experience everything the shops had to offer.
“Our 2014 FCBD was our best yet for both Third Eye Comics stores. Our flagship store in Annapolis, MD saw a 15% increase over last year’s attendance numbers, as well as a 20% increase in our sales numbers from last year,” said Owner of Third Eye Comics, Steve Anderson.  “A rough estimate on attendees came in at around 7,000 for our Annapolis location.”

Free Comic Book Day is more than an event; it’s the collaboration of an entire industry putting forth its best effort to welcome new and returning readers to the world of comic books. The industry will use this year’s success as a springboard for what’s to come for the highly anticipated FCBD on May 2, 2015.

Free Comic Book Day is the comic book specialty market’s annual event where participating comic book shops across North America and around the world give away comic books absolutely free to anyone who comes into their shops. The event is held the first Saturday in May and is the perfect opportunity to introduce friends and family to the many worlds of wonder available at local comic book shops. From super-heroes to slice-of-life to action/adventure and beyond, Free Comic Book Day has a comic book for everyone!