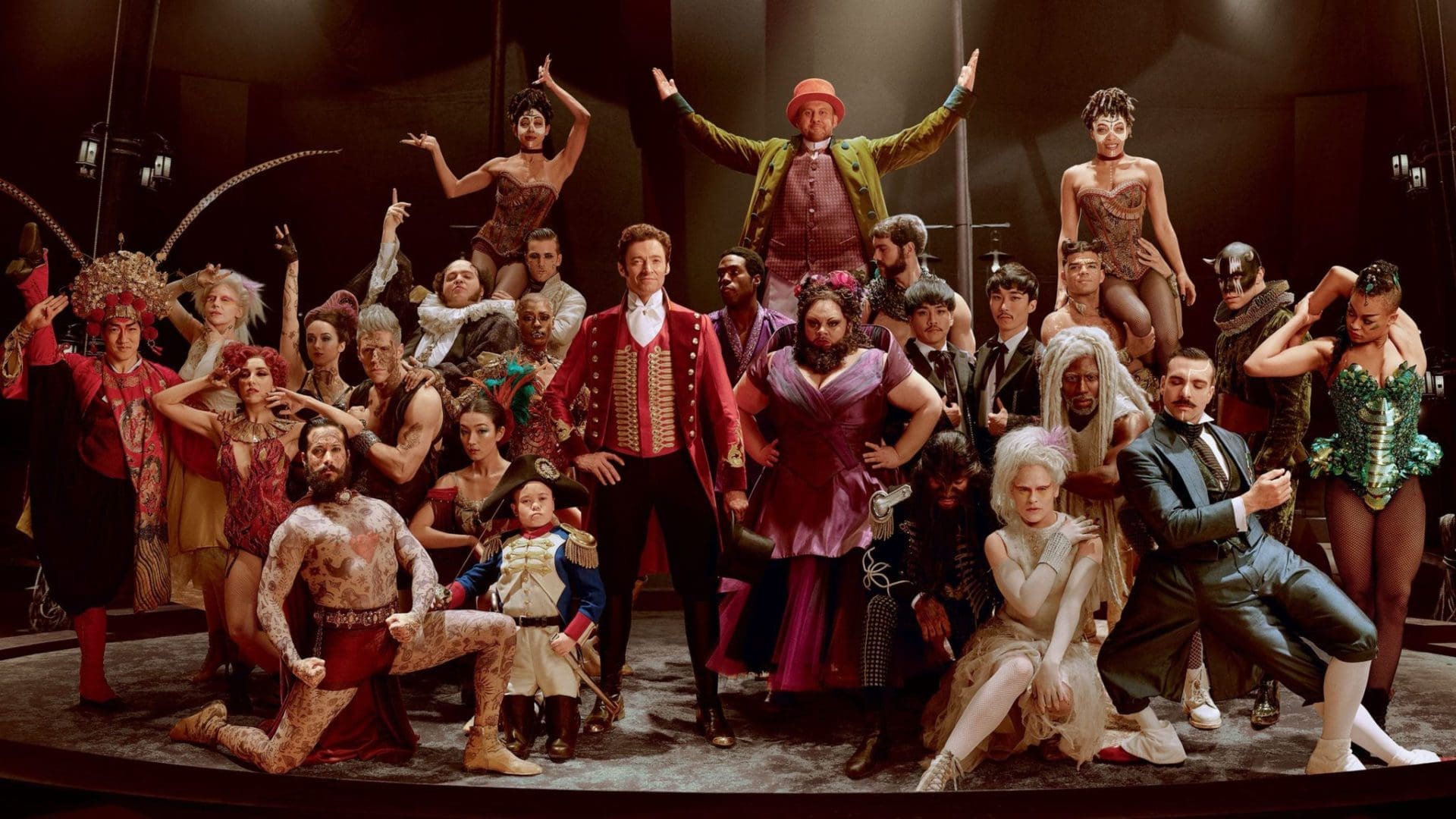 Whenever the holidays roll around, we can always expect a few feel-good movies to round out the year.  Something to tug at the heartstrings, have us share some hilarious joke as a family, or leave us humming a tune that is now cleverly lodged in our subconscious.  The musical is one such genre that caters to the emotions of the holiday crowd.  Even when the subject matter is downtrodden and morose, a good song can liven up any spirit.  Some people do not connect with the fantasy concept of a musical and its song and dance numbers, but their purpose is like any other film.  Musicals are meant to inspire, engage, and provide a brief escape from your personal reality.  There will always be a human element that you can relate to and that will be the lynchpin of the story.

In The Greatest Showman, directed by Michael Gracey, P.T. Barnum(Hugh Jackman), or Phineas, is a young man living in early 19th century America with his wife Charity and their two daughters.  When he is abruptly laid off from a soul-crushing profession, his stifled ambitions suddenly find new life when he decides to create a spectacle of entertainment the world has never known.  He scours the city for strange people with unique abilities.  Acrobats, freaks, and performers of all variety.  This new enterprise is slow to catch on, but in time becomes a phenomenon that captures the imagination of families for generations.  It’s the kind of success that Phineas is not quite prepared for and forces him to make sacrifices along the way.  Even with the assistance of his protege Philip Carlyle(Zac Efron), a classical theater promoter, the workload that the greatest show demands become overwhelming.  Phineas must figure out how to pursue his dream, but without letting it destroy the ones he loves.

One of the things that take you aback briefly is the choice of music in this film.  The producers made the choice of incorporating modern contemporary songs into the story, as opposed to the standard Gershwin, Rodgers and Hammerstein, Sondheim style.  I’m not sure if it works completely, it works for Baz Luhrmann most of the time, but I did have fun getting to know the characters through a more current sound.

The story is decent and provides a fair amount of detail about this chapter in P.T. Barnum’s life.  I only wish it flowed better as the narrative moved across time.  There were moments I think could have lasted longer for instance, particularly in Barnum’s younger years.  Also when we are introduced to the performers, the real stars of the show, we only get to know maybe three of them.  Only two of which get to sing about their tormented lives between two worlds.  One of shame and ridicule and one of hidden potential yearning to break free.

That may be my biggest problem with the movie.  There is not enough time spent giving the dimension and depth these characters deserve.  These performers are the outcasts of society.  They survive by hiding the things they are born with and shunning the things they love.  The film is about P.T. Barnum and his creation of the circus, but the unsung heroes and their journey are where the heart of this story should have been placed.  Barnum may have hired them and given them a platform to showcase their talents, but it wasn’t for altruistic reasons.  He did and said things to get the desired result from his employees and the audience.  Sometimes it required a bit of manipulation and hoodwink.  The unexpected end result is these performers, people, have a place they can feel safe and empowered.  A place they can truly call home.  It sent a message to every corner of the world that ignored and despised them.  They are remarkable human beings who should be celebrated.  And it eventually happened as cities and towns started to invite the circus with open arms.  Laughing joyously and applauding along the way.  Looking forward to the sound of the train approaching with surprises inside.  The message is there in several musical numbers.  I just think overall it could have been so much more powerful.

I can’t say how historically accurate this portrayal of Barnum is so I will give it the benefit of the doubt.  It’s not a documentary after all so it can alter certain facts to better serve the story.  Barnum in this movie is a heavily flawed individual who will stop at nothing to fulfill his lifelong goals and dreams.  Hugh Jackman somehow manages to make that kind of character likable and charismatic, which are necessary characteristics for someone trying to pull off the things he does.  Michelle Williams has little to do but provides that strong female presence and voice of reason that Barnum needs to listen to.  While these two actors are amazing in their respective roles, I’d say the standouts are Zac Efron as Carlyle and Zendaya as Anne Wheeler, a remarkable acrobat, and trapeze artist.  Their forbidden romance captured my heart and the chemistry between them made their story leap off the screen.  I wish we got more moments with them, but again the movie chooses to focus more on a singular individual rather than the ensemble.

Other noteworthy actors are Rebecca Ferguson as Jenny Lind, an opera singer, although you won’t hear any opera in her performances, Paul Sparks as James Gordon Bennett, a journalist and theater critic for the Herald, who has a wonderful back and forth with Barnum about his low-brow entertainment throughout the film, and Keala Settle as Lettie Lutz, a bearded woman with a powerful voice.  Lettie is our gateway singer into the world of the strange and unbelievable.  She summons a great deal of emotion into every note, much like Ferguson.  I’m not saying the rest of the cast isn’t worth mentioning, but they just aren’t there from a story standpoint.  They fill out the musical numbers and drop by the wayside.

It is easy to romanticize the past when the negative aspects of certain moments go unrecorded.  I think this movie removes the animal cruelty element of the circus so it does not have to address it.  Escaping reality is not the same as ignoring it entirely.  Entertainment should always be a fun environment and devoid of involuntary participation.  I know this is a musical and we are having a good time, but a modern telling of a story shouldn’t leave out issues that are important to a modern society.

The Greatest Showman, much like P.T. Barnum himself, has several flaws that keep it from being a great movie and musical.  The editing needed work and there is story structure that diminishes interesting characters.  It does offer superb performances and I would say that Hugh Jackman, Rebecca Ferguson, Zac Efron, and Zendaya make this film worthwhile.  The heart is there and it’s entertaining when it counts.  If you were to see this in the theaters, I think you’ll be satisfied.

About The Greatest Showman

Synopsis: Inspired by the imagination of P.T. Barnum, The Greatest Showman is an original musical that celebrates the birth of show business and tells of a visionary who rose from nothing to create a spectacle that became a worldwide sensation.

“The Hobbit: The Desolation of Smaug” Movie Review