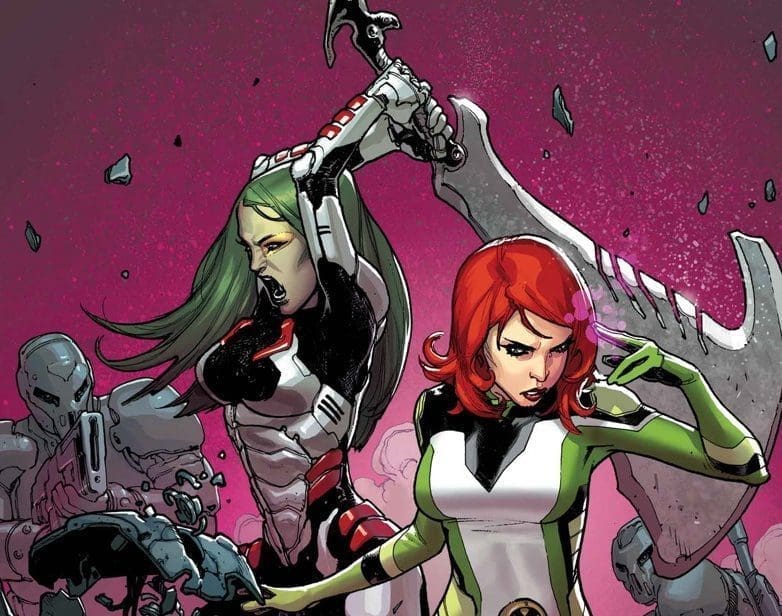 Guardians of the Galaxy #12 is oddly lacking in showcasing the actual Guardians themselves, but provides a heap of forward momentum in the Trial of Jean Grey in this, the fourth chapter of the crossover event. Writer Brian Michael Bendis focuses a lot of the book’s narrative on the titular trial itself, presenting a confused and scared Jean Grey preparing to face her accusers, who, surprisingly, might not be all-in on condemning the adolescent mutant for her crimes as the Phoenix. There’s certainly justifiable material within these pages, though the absence of most of the Guardians of the Galaxy is definitely noticeable given this is their title, and also a bit ill-timed with the Internet in a fervor over the Guardians of the Galaxy film trailer released last week. This is still a great issue as far as the crossover is concerned, but it’s more a showcase for the All-New X-Men, than the team featured on the title of the book.

One character that gets his lion’s share of the spotlight here is Young Cyclops, whose recent reunion with his father, Corsair, results in a lot of dramatic, character-driven moments throughout the issue. While the space-pirating Corsair is a perfect fit for the Guardians universe, his conversations with Cyclops do not service the narrative, especially knowing that there is a Cyclops solo series coming out in the near future where these interactions would be better suited for. Guardians of the Galaxy #12 is at its best when dealing with the impending trial of Young Jean, and Bendis curiously hints at some naysaying within the Shi’ar camp. It’s obvious this trial will be put to an end before Jean is sentenced but that the heroes might not be the only intervening party is an interesting new development.

Further incorporating these two teams of heroes is the combined efforts of regular Guardians artist Sara Pichelli and All-New X-Men artist Stuart Immonen. Both are credited with work on the entire issue and having read through it twice, I honestly cannot sense where one artist steps in for the other—it’s that seamless. Pichelli and Immonen’s art compliments one another so well, resulting in an issue that feels like a true crossover and not just one team guest starring with another. As this issue is the most emotional of the event thus far, Pichelli’s expressive faces convey an array of feeling throughout, from Scott being unable to cope with being reunited with his father to the look of confusion and horror on Jean’s face when presented with footage of her destruction as the Phoenix. When it comes to these two artists, having their talents inside one book is worth the cover price alone.

Guardians of the Galaxy #12 is a good issue of Guardians of the Galaxy that hardly features the Guardians of the Galaxy. It’s a particularly odd choice considering the number of readers with Blue Suede’s “Hooked on a Feeling” playing on repeat and looking for something comparable to the recently released movie trailer. Those readers will want to check out the series from the beginning while anyone invested in the Trial of Jean Grey will find plenty of forward momentum as the crossover begins winding down.