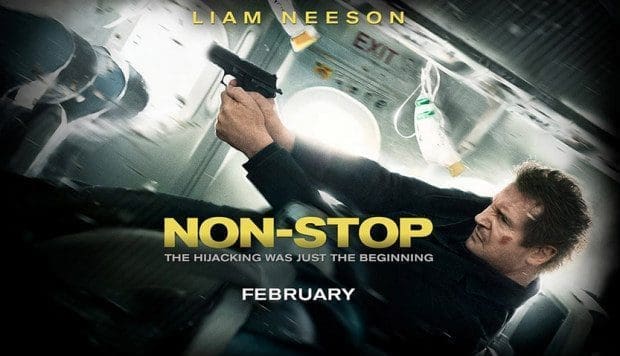 Liam Neeson has made some very well regarded films. He captures your attention with every scene he’s in, no matter how small the part.  Lately that talent has been used in more fun and action-packed movies where danger is always two steps behind him. So in the same vein as Taken and Unknown, we are fortunate to find him in another white-knuckle scenario where the stakes couldn’t be higher.

In the film Non-Stop, directed by Jaume Collet-Serra, Bill Marks (Neeson) plays a US Air Marshal boarding a plane bound for England. He meets another passenger named Jen (Julianne Moore), who shares a window seat next to him. The flight is calm and routine, except for several mysterious text messages Bill suddenly receives on his private phone: Transfer 150 million dollars to a bank account or one person dies every twenty minutes. Bill is placed in another difficult situation when it appears the bank account given for the transfer is in his name. The texts are ominous and appear to be coming from a fellow passenger, but Bill cannot confirm its whereabouts on the plane. So he sets to rule out the suspects with the help of Jen and the flight attendants. Bill’s innocence is complicated by his actions as he tries to uncover the killer and maintain order.

The tension of the crew and passengers slowly builds as the movie goes on. Timely deaths occur and there is no easy answer as Bill is forced to take over the plane in the hopes of drawing the killer out. His superiors, unsure of his motives, do not condone his actions, and he receives no help from the ground. Even the passengers begin to suspect him.

The movie will remind you of similar films such as Executive Decision or Flight 93. It has an intimate feel since the movie takes place almost entirely in the cabin of the plane. This helps immerse you in the situation because, whatever happens, you are right there with them.

The pacing seems slow at first, but the interactions of the characters and the ever-present uncertainty throughout the plane keeps you engaged. The background characters always seem to be an important component in these types of movies and in this one they work quite well. Particularly Corey Stoll (House of Cards), who plays a New York policeman, and Michelle Dockery (Downton Abbey), as a flight attendant named Nancy who aides Neeson in locating the assailant. Julianne Moore is a real standout as always; her presence not only provides some subtle levity, but also helps Neeson’s character not feel so alone while the plane and the world turn against him.

If you are looking simply for a movie that makes your heart race and puts people in jeopardy for your amusement, you’ve got yourself a nice thrilling ride here. What could have been a straight-to-DVD affair is actually made exciting by a very committed and top-rate cast who elevate this movie above its familiar predecessors.