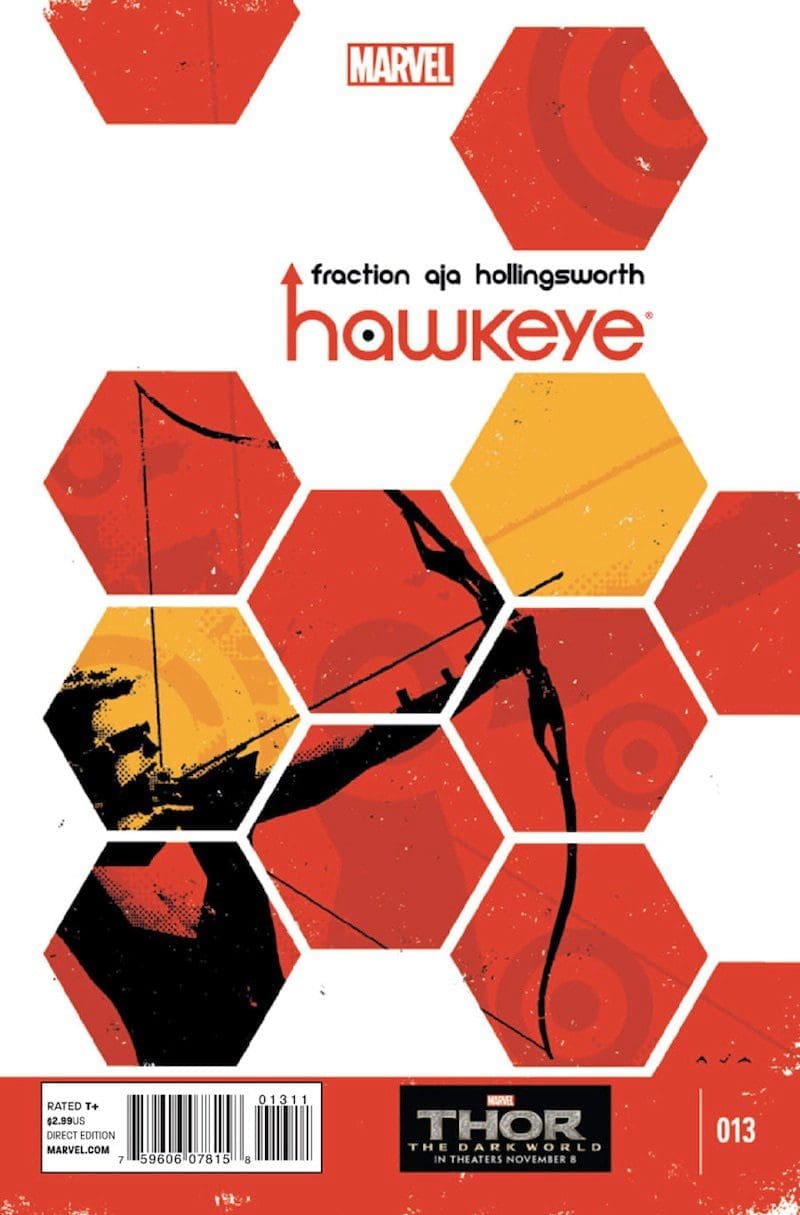 Reading Hawkeye #13, it’s hard to comprehend that something this good hasn’t been on shelves since the middle of July, and that’s a crime. But writer Matt Fraction and artist extraordinaire David Aja have righted this wrong with an issue that draws heavily from the previous issues in the series to provide an even fuller picture of the grand narrative at play here. Fraction is putting a lot on the shoulders of an unwilling Clint Barton (aka Hawkguy) this time around, including a murder to solve, relationships to repair, and a distant brother to take care of. Hawkeye might not have much of anything in his life right now but Fraction is giving him plenty to work on.

Even with the three-month lull, Hawkeye #13 opens with one of its simpler summaries of previous events (“last time: they. killed. grills.”) and that is more than enough to jumpstart our collective memories back into the habitual mindset of this world. There’s a familiarity that carries all throughout the issue, in fact, as Fraction calls back to several conversations that took place during his much beloved Pizza Dog issue of Hawkeye #11, only this time around it’s from Clint’s point of view with the dialogue discernible. It’s a great treat for those looking to go back and compare the panels of both issues, but not at all necessary to enjoy this issue. Much of Hawkeye #13 is used to acclimate Clint to the current state of affairs—the murder of Grills, the hunt for the killer, Kaziu, and reuniting with his brother, Barney—so the pace is considerably slower than normal, but just to be back with this character, having him phone his ex-wife to ask her how to spell a word he’s using in a letter to his current girlfriend, is enough sometimes.

It’s a seamless transition to move back into Fraction’s humor for the series, just as it is to David Aja’s graceful art. His depiction of Clint is simple but effective, and Aja’s minimal touches to the background are well suited for a world in which the main character doesn’t have a lot of stuff in his apartment. Aja has such a clear depiction of the Clint Barton of this particular series that seeing Hawkeye outside of it feels weird and wrong. Matt Hollingsworth’s colors brilliantly accentuate Aja’s art, particular in the funeral sequence, and the swapping between color palettes throughout the book keep the timeframe clear. Seeing Fraction, Aja, and Hollingsworth back together makes this issue worth its excruciatingly long wait.

‘Fast & Furious’ Star Cast as Wonder Woman in Man of...