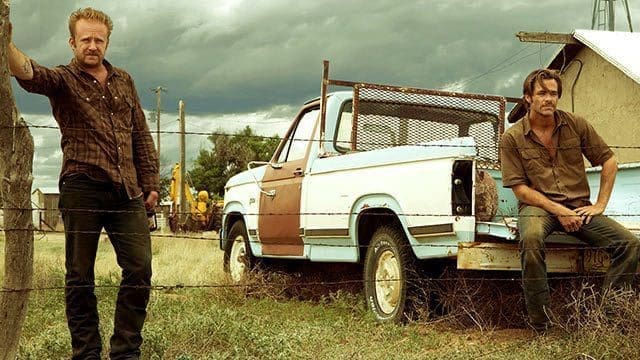 Hell or High Water takes its time laying out the plot for the audience. This isn’t a film that gives you all the details you need within the first 20 minutes and part of the fun is figuring out what’s going on, so we won’t ruin that for you here. The movie opens with Tanner Howard (Ben Foster) and his brother Toby Howard (Chris Pine) just before they rob a bank in west Texas. You don’t know why they’re robbing the bank, and the first time you see the brothers, you don’t even know which is which because they’re wearing masks.

As the first act unravels you slowly start to learn why the two are robbing banks. The plot unfolds as the relationship between the two brothers becomes more clear. It’s not the first time a film has jumped right into the action, but it’s done very well in Hell or High Water. The audience is intrigued by the characters and how they’re interacting during robberies and when they’re just two brothers on the ranch. The details of the plot just add to the intrigue as the story begins to unfold.

Chasing after the two brothers are the Texas Rangers, Marcus Hamilton (Jeff Bridges) and Alberto Parker (Gil Birmingham). The brothers have a fairly normal relationship, but the two Rangers have the kind of relationship you only get from your closest friends. Hamilton is constantly teasing Parker with racist jokes, while Parker jabs back with retirement jokes, poking fun at the fact that Hamilton is due to retire within the month.

While there are a few ancillary characters, the two brothers and the two Rangers make up the focus of the film. Throughout the movie the audience learns why the brothers are robbing banks, but you also grow closer to the two Rangers. In fact, as the film draws to a close, the audience is torn between who to root for. The brothers aren’t bad people, but they are breaking the law. Meanwhile, the Rangers are tasked with upholding the law.

There’s a bigger picture here than just right and wrong and that’s what is most intriguing about Hell or High Water. When you learn of the circumstances surrounding the bank robberies and find out more about the Howard family, you begin to understand their motives. In some cases many people might even agree with their motives if they found themselves in a similar situation.

Without giving anything away, Hell or High Water is a fun movie with a lot of banter between the brothers and some playful racism between the Rangers. There’s a deeper message here, but it’s easy enough to take the movie at face value and enjoy the ride. You won’t see a lot of action, but there’s enough to keep most of today’s movie-going audience engaged. While you probably don’t need to rush out and see Hell or High Water in theaters, it’s a solid film that you should check out when you have the time.

About Hell or High Water

Synopsis: A divorced dad and his ex-con brother resort to a desperate scheme in order to save their family’s farm in West Texas.