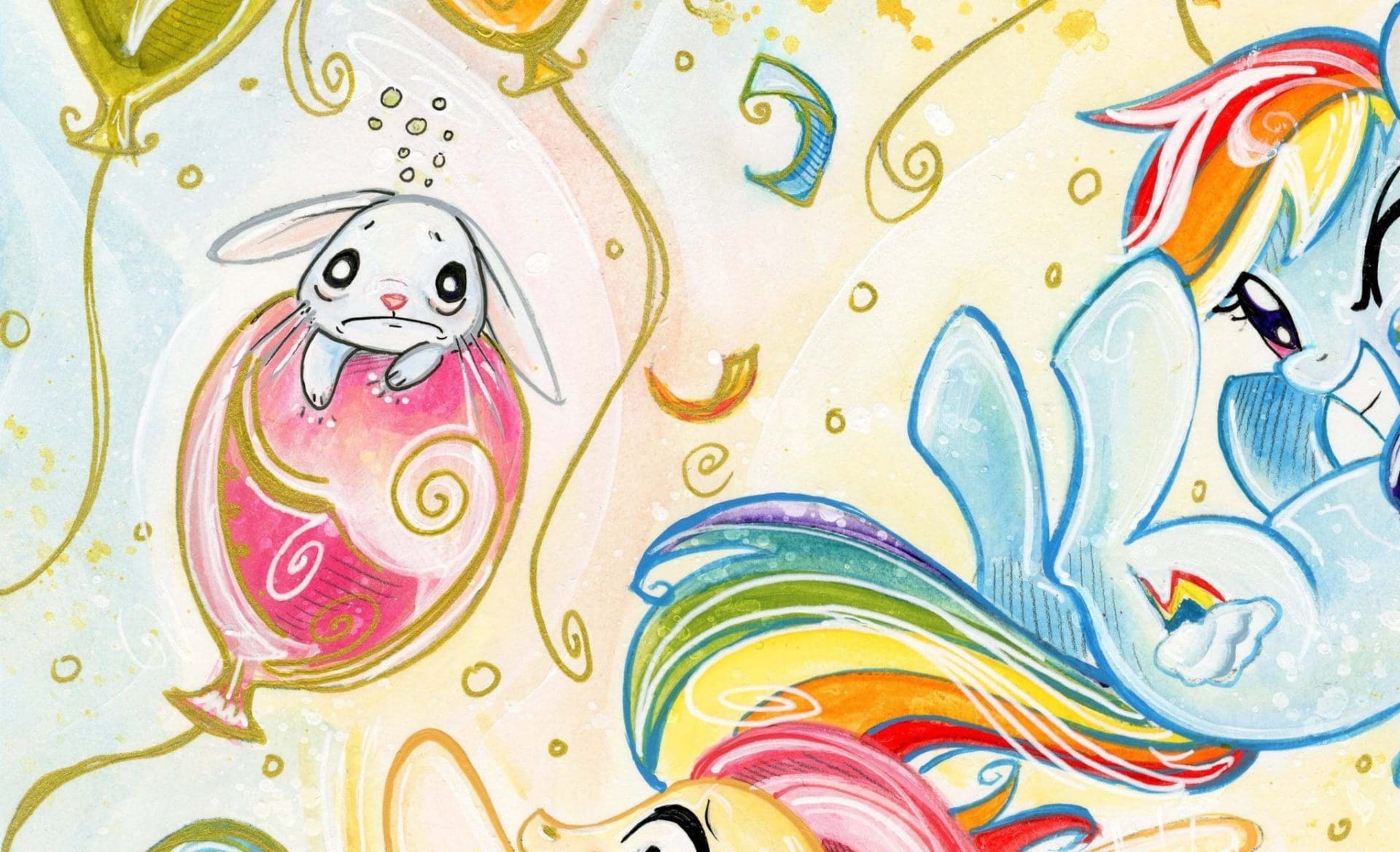 My Little Pony: Friendship is Magic fast became the best-selling comic in IDW’s history and last year the title reached a monumental milestone of selling over one million copies at retail. To celebrate the occasion, IDW and Hasbro collaborated on a very special promotion. In an unprecedented move, an extremely rare variant cover by fan-favorite Sara Richard of issue #12 of My Little Pony: Friendship is Magic was made, so rare it was limited to ONE copy total!

IDW and Hasbro are proud to announce that they are joining with Heritage Auctions, the largest collectibles auctioneer and third largest auction house in the world, to auction both the one-of-a-kind issue and the original artwork by Richard, at Heritage’s Signature Auction, this August 7th. Proceeds of the auction will benefit Give Kids The World, a non-profit organization that provides children from around the world with life-threatening illnesses and their families a memorable and cost-free visit to Central Florida attractions.

“One of the central tenants of My Little Pony: Friendship is Magic, is that when friends work together, virtually anything can be accomplished,” said Michael Kelly, Hasbro’s Director of Global Publishing. “With this exciting event we are able to put that message into action on behalf of a truly wonderful organization. Sara’s art just exudes joy, which is appropriate given how much happiness we expect it to bring.”

“We’re thrilled to be able to do something this special with such a unique comic book,” said IDW President Greg Goldstein.“Hasbro is of course one of our most valued relationships. Heritage Auctions is the best in the business, and Give Kids The World is just a great organization with a fabulous mission. I can’t imagine a better way for us to celebrate the continuing success of My Little Pony.”

MY LITTLE PONY is an evergreen lifestyle brand that continues to be a worldwide perennial favorite. The “My Little Pony: Friendship is Magic” animated series is created by Hasbro Studios and is currently airing on The Hub TV Network in the United States and can be seen globally in over 180 territories.
“Richard’s My Little Pony comic book is a feel-good addition to our August 7th auction, and we feel honored to work with IDW and Hasbro,” said Jim Halperin, Co-Founder of Heritage. “Relationships like this allow Heritage Auctions to help support worthy charities like Give Kids The World.”

The one-of-a-kind variant issue #12 of My Little Pony: Friendship is Magic will be on view at Heritage Auctions booth at Comic-Con International: San Diego.

Hasbro, Inc. is a branded play company dedicated to fulfilling the fundamental need for play for children and families through the creative expression of our world class brand portfolio, including TRANSFORMERS, MONOPOLY, PLAY-DOH, MY LITTLE PONY, MAGIC: THE GATHERING, NERF and LITTLEST PET SHOP. From toys and games, to television programming, motion pictures, digital gaming and a comprehensive licensing program, Hasbro strives to delight its global customers with innovative play and entertainment experiences, in a variety of forms and formats, anytime and anywhere. Hasbro Studios develops and produces television programming for more than 180 markets around the world, and for the U.S. on Hub Network, part of a multi-platform joint venture between Hasbro and Discovery Communications (NASDAQ: DISCA, DISCB, DISCK). Through their deep commitment to corporate social responsibility, including philanthropy, Hasbro is helping to build a safe and sustainable world for future generations and to positively impact the lives of millions of children and families every year.

Heritage Auctions is the largest collectibles auctioneer and third largest auction house in the world, as well as the largest auction house founded in the US. They are also the undisputed Internet leader in our field. Their 850,000+ registered online bidder-members, and $900+ million annual revenues are a testament to the usefulness of our website (HA.com), thier reputation for professional business practices and their vast expertise in the field of art and collectibles. Established in 1976, Heritage offers a wide range of US & World Coins, Rare Currency, Fine & Decorative Art, Western Art, Illustration Art, Vintage Comic Books & Comic Art, Movie Posters, Entertainment & Music Memorabilia, Jewelry & Timepieces, Vintage & Couture Handbags, Sports Collectibles, Historical & Political Memorabilia, Rare Books & Manuscripts, American Indian Art, Air & Space Memorabilia, Civil War Memorabilia, Vintage & Contemporary Photography, Nature & Science Specimens, Fine and Rare Wine, URL domain names and other Intellectual Property, Luxury Real Estate and more.  They give their customers unprecedented access to our services using the latest advancements in technology and by maintaining a strong presence in the collectibles community. Their knowledgeable staff of over 130 experts and 400 additional service-oriented professionals, and our suite of services, help our customers develop the best collections possible.

About Give Kids The World

Give Kids The World is a non-profit organization that provides children from around the world with life-threatening illnesses and their families a memorable and cost-free visit to Central Florida attractions. Through the tireless support of volunteers, employees and generous partners, over 130,000 children have had their dream come true at Give Kids The World.

Batman Day: A Celebration of All Things Dark Knight