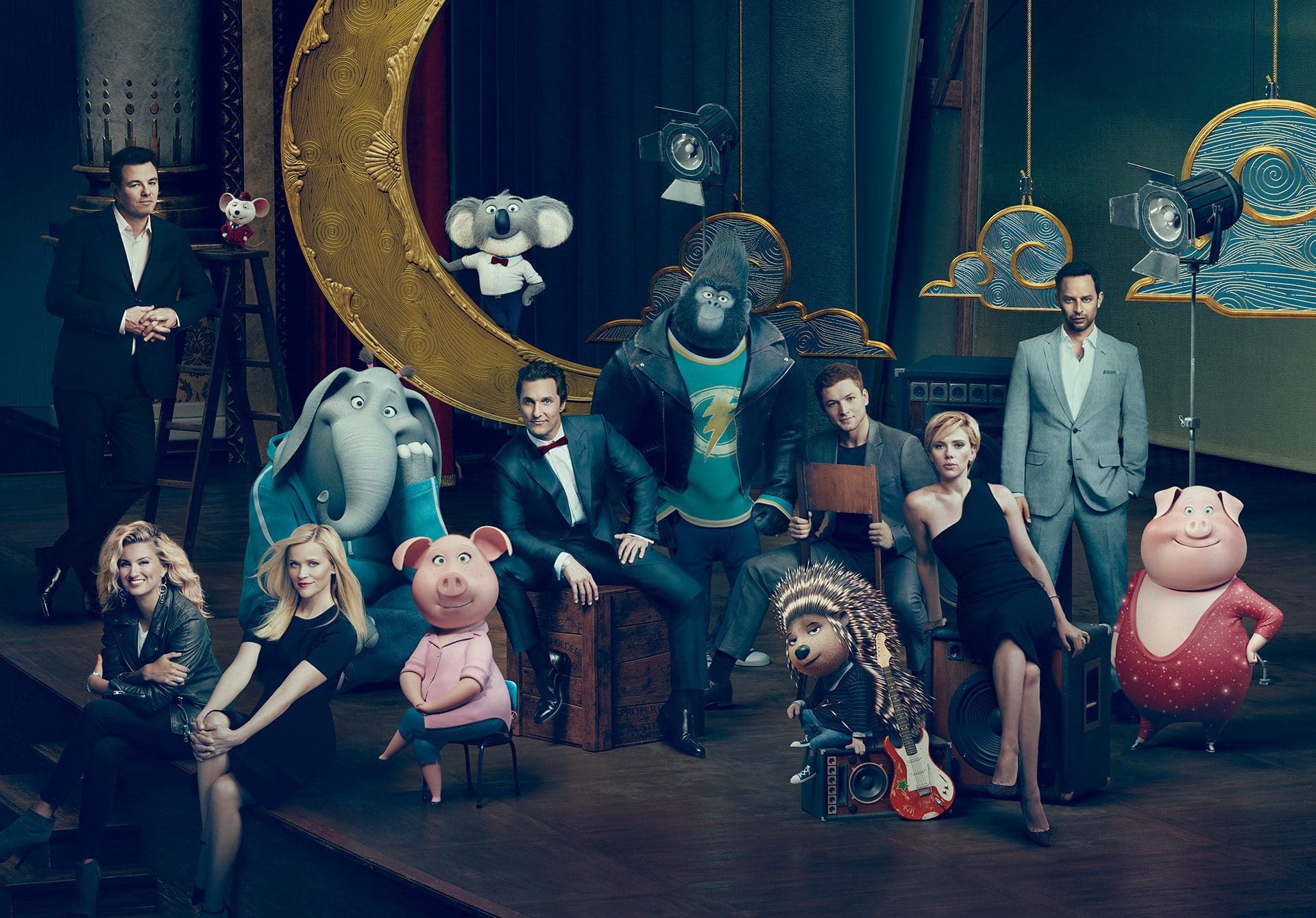 Illumination has captivated audiences all over the world with the beloved hits Despicable Me, Dr. Seuss’ The Lorax, Despicable Me 2 and Minions, now the second-highest-grossing animated movie in history.  Following the release of this summer’s comedy blockbuster The Secret Life of Pets, Illumination presents Sing this holiday season.

With its highly relatable characters, heart and humor, the first collaboration between writer/director Garth Jennings (Son of Rambow, The Hitchhiker’s Guide to the Galaxy) and Illumination founder and CEO Chris Meledandri marks the sixth fully animated feature from the studio.

Set in a world like ours but entirely inhabited by animals, Sing stars Buster Moon (McConaughey), a dapper koala who presides over a once-grand theater that has fallen on hard times.  Buster is an eternal—some might even say delusional—optimist who loves his theater above all and will do anything to preserve it.  Now faced with the crumbling of his life’s ambition, he has one final chance to restore his fading jewel to its former glory by producing the world’s greatest singing competition.

Five lead contestants emerge: Mike (MacFarlane), a mouse who croons as smoothly as he cons; Meena (Kelly), a timid teenage elephant with an enormous case of stage fright; Rosita (Witherspoon), an overtaxed mother run ragged tending a litter of 25 piglets; Johnny (Egerton), a young gangster gorilla looking to break free of his family’s felonies; and Ash (Johansson), a punk-rock porcupine struggling to shed her arrogant boyfriend and go solo.

Each arrives under Buster’s marquee believing that this is their shot to change the course of their life.  And as Buster coaches each of his contestants closer and closer to the grand finale, he starts to learn that maybe the theater isn’t the only thing that is in need of saving.

Featuring more than 65 hit songs, Sing is produced by Meledandri and his longtime collaborator Janet Healy.  Together, they have produced all of Illumination’s films since the studio’s inception.  Released by Universal Pictures, Sing arrives in theaters on December 21, 2016.

Written and Directed by:  Garth Jennings For the first time ever, Academy Award® winner MATTHEW MCCONAUGHEY appears with his character, Buster Moon, from Illumination Entertainment’s Sing.

Buster Moon is an eternal—some might even say delusional—optimist who still believes in the wonder and magic of his once-grand theater and will do anything to preserve it.

Like all the stars of Sing, McConaughey does his own singing in the film, with a memorable rendition of Carly Rae Jepsen’s “Call Me Maybe.”

“I’ve always regarded Buster as the ultimate creator…a showman who refuses to accept defeat and a guy who will accomplish the impossible through sheer force of will.  Others may see his theater collapsing around him, but not Buster.  Through his eyes, you’ll begin to imagine the crown jewel of this incredible town…a place where people can truly transform,” says McConaughey. For the first time ever, Academy Award® winner REESE WITHERSPOON appears with her character, Rosita, from Illumination Entertainment’s Sing.

Rosita is an overtaxed mother run ragged tending a litter of 25 children but who keeps the flicker of a secret dream inside.

Like all the stars of Sing, Witherspoon does her own singing in the film, including renditions of Taylor Swift’s “Shake It Off,” Katy Perry’s “Firework” and Bananarama’s “Venus.”

“Ever since she was a girl, Rosita has held on to this tiny part of herself she’s been hesitant to share with the world.  But once she genuinely owns who she is, this shy mom and wife realizes that it would be criminal not to unleash her talents.  In fact, it’s the love and passion Rosita’s given and received that pours out of her when she embraces her inner diva and lets loose,” says Witherspoon. For the first time ever, SCARLETT JOHANSSON appears with her character, Ash, from Illumination Entertainment’s Sing.

Ash is a betrayed teenager who will mend her broken heart through the power of rock-and-roll.

Like all the stars of Sing, Johansson does her own singing in the film, including renditions of Carly Rae Jepsen’s “Call Me Maybe” and an all-new original song, “Set It All Free.”

“Once Ash understands that all of the attention, effort and energy she’s been giving her worthless boyfriend has been standing in the way of her own musical gifts, she transforms into a badass.  Ash eschews outdated expectations that she should deliver a pop-princess act on the stage and just rocks it out with original music.  I adore her,” says Johansson. For the first time ever, SETH MACFARLANE appears with his character, Mike, from Illumination Entertainment’s Sing.

Mike is a con man who croons as smoothly as he swindles.

Like all the stars of Sing, MacFarlane does his own singing in the film, including renditions of standards including Irving Berlin’s “Let’s Face the Music and Dance,” “Pennies From Heaven,” made famous by Bing Crosby, and “My Way,” which is synonymous with Frank Sinatra.

“What I like about this character is that he has zero concept of just how small he is.  Mike is a whirlwind mix of bravado, swagger and showmanship, and he genuinely believes he has nothing to prove.  He needs the contest money because he’s made some very poor decisions, and he’s certain that his larger-than-life personality and stage persona hold the ticket to winning,” says MacFarlane. For the first time ever, TORI KELLY appears with her character, Meena, from Illumination Entertainment’s Sing.

Meena is a timid teen with an enormous case of stage fright who keeps a powerhouse voice trapped inside.

Like all the stars of Sing, Kelly does her own singing in the film, including renditions of Stevie Wonder’s “Don’t You Worry ‘Bout a Thing” and Leonard Cohen’s “Hallelujah,” The Beatles’ beloved classic.

“I don’t know anyone who doesn’t have a bit of Meena inside. She’s that timid kid who desperately wants to share her gifts with the world, but is always second guessing herself.  As an artist, I went to that place of insecurity inside teenage Tori to find my inner Meena. Then you take a deep breath, shake off the nerves and just let the music take over,” says Kelly. For the first time ever, TARON EGERTON appears with his character, Johnny, from Illumination Entertainment’s Sing.

Johnny is a reluctant part of his dad’s bank-robbing crew, as well as an aspiring singer who longs to step out and show who he really is.

Like all the stars of Sing, Egerton does his own singing in the film, including renditions of Sam Smith’s “Stay With Me,” John Legend’s “All of Me” and Elton John’s “I’m Still Standing.”

“I think that one of the biggest fears we all have is that we will disappoint our parents.  All you want is their acceptance, but as you come into your own, you begin to realize that your dreams don’t always intersect with theirs.  Johnny’s relationship with his father epitomizes this.  He only needs Big Daddy to listen, to actually hear him, just once.  If that happens, Johnny believes he can become his own man and really soar,” says Egerton. For the first time ever, NICK KROLL appears with his character, Gunter, from Illumination Entertainment’s Sing.

Gunter is the Spandexed show-stopper whose sheer enthusiasm overcomes his lack of actual talent.

Like all the stars of Sing, Kroll does his own singing in the film, including renditions of Lady Gaga’s “Bad Romance,” Taylor Swift’s “Shake It Off” and Bananarama’s “Venus.”

“Gunter knows what we all should: Everything is better in a gold track suit.  He is the yin to Rosita’s yang.  If she’s hesitant, insecure and brilliantly talented…then Gunter is the one who’s first to hit the stage and shake his piggy patootie; he’s a legend in his own mind.  When I first experienced Reese and myself as Rosita and Gunter on the screen, I honestly couldn’t stop grinning,” says Kroll.

Dwayne Johnson wants YOU to follow his epic fitness and diet...