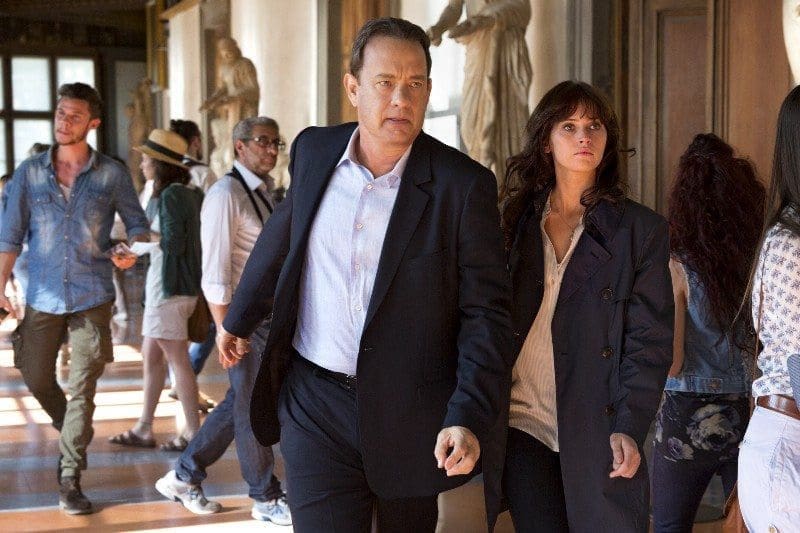 Dan Brown was a household name just a few years ago. The Da Vinci Code was a major player in the literary market, topping sales charts across the globe. While it wasn’t the first book in the Robert Langdon series, it was the best-selling entry, and therefore became the subject of the first film in the franchise back in 2006. Three years later Angels & Demons made the jump to the big screen, but it grossed a fair amount short of The Da Vinci Code. Now, Dan Brown fans finally get a third entry in the film franchise, Inferno.

As is the case with most book to film adaptations, most would agree that The Da Vinci Code and Angels & Demons weren’t up to snuff compared to the books. Taken as standalone products, the films were above average, but they failed to impress many fans of the books. Inferno falls right in line with the previous two films in the series, but the story isn’t nearly as strong as The Da Vinci Code or Angels & Demons. The end result is a fun and insightful film, but a step down from the first two movies.

If you’ve seen the first two movies or read a Dan Brown book, you should already know the basic premise of Inferno. Professor Robert Langdon (Tom Hanks) is pulled into a mystery steeped in historical references that endangers his life and will cause mass devastation if he can’t solve the puzzle laid out before him.

The main difference between Inferno and the other films is that this movie begins with Langdon in a hospital suffering from amnesia. Much of the first act consists of Langdon (and the audience) attempting to put the pieces together and figure out what’s going on, while simultaneously solving the puzzle at hand. Of course there’s the trademark Dan Brown twist (several in fact), but the whole story just lands a bit flat when compared to Brown’s better works of literature.

Inferno is not a bad film by any means. In fact, if you’re going in without prior knowledge of the series or Dan Brown, it’s quite enjoyable. There are a few nods to the previous films that may confuse newcomers, but nothing that would hurt your understanding of the overall story.

As with many of Brown’s books, Langdon is joined by an attractive partner to help him solve the mystery at hand. This time around that person is Sienna Brooks (Felicity Jones). Omar Sy and Irrfan Khan round out the main cast as they take on the roles of two of the more dangerous characters in the film. Sy plays Christoph Bouchard, a member of the World Health Organization, while Khan takes on the role of Harry Sims, a man working for an agency shrouded in secrecy. All of the acting is solid, even if Tom Hanks definitely feels older and perhaps a little slower during action sequences.

It’s been many years since Angels & Demons hit the big screen. If you were a fan of the last two films, or Dan Brown books in general, there’s a high probability you’ll enjoy Inferno as well. Once again, the story isn’t quite as polished as the other two films in the series, but it’s still a fun ride, especially if you haven’t read the book and don’t know how everything plays out. There are enough twists and turns to keep the audience engaged, and a bit of historical background to provide some education between action sequences. If you haven’t had the pleasure of reading any of Brown’s work or watching the last two films, you should still enjoy Inferno despite the moderately weak story.

Synopsis: When Robert Langdon wakes up in an Italian hospital with amnesia, he teams up with Dr. Sienna Brooks, and together they must race across Europe against the clock to foil a deadly global plot.