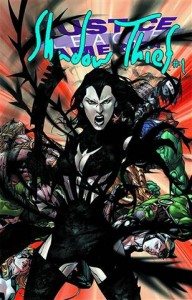 Once again, DC released their next installment of a different villain in villains’ month with Justice League of America 7.3: Shadow thief. This time, DC did it right choosing Shadow Thief to be in the JLA Universe. She is originally a villain that Savage Hawkman and Hawkgirl have faced on numerous occasions. The real question though; is she a character that is interesting enough to have her own comic? The answer is no. No she isn’t.

The story of Shadow Thief takes place where she is in contact with a group of people in a tall skyscraper. The meeting went south and it ended with her getting pushed out from the top of the building. On her way down, she is recollecting how she became Shadow Thief and why she is doing this line of dangerous work. Needless to say, while she is plummeting towards her death, She puts on her shadow suit and takes out the people that pushed her off. Unfortunately, there was a price to pay for her to wear the suit. The more she wore the shadow suit, the harder it was to take it off. Now unable to take the suit off, Shadow Thief has become one with the shadows.

The writing in this book was a little dry, but overall it did give a fair picture on the background of Shadow Thief. One could argue that She feels more of an anti-hero than a villain in this book, but it did not pull me in on wanting to know more about the character. The author in this book was Tom Defalco (Superboy New 52) and I appreciate his vision for this villain, but I just could not care about the trials and woes that Shadow Thief experienced.

The art that was done by a fair newcomer Chad Hardin was mediocre it best. The comic felt expressionless, but he did a good job on the backgrounds of the scenes. I would have to say the best art in this book was the cover that was done by Tony S Daniel.

Overall, the book was an alright read. The story and the art did not really pop out to me but, it did set a structured back story of the villain. One can only hope that Shadow Thief will become relevant in the JLA stories in the future. But as for right now, I don’t think she would even be missed.