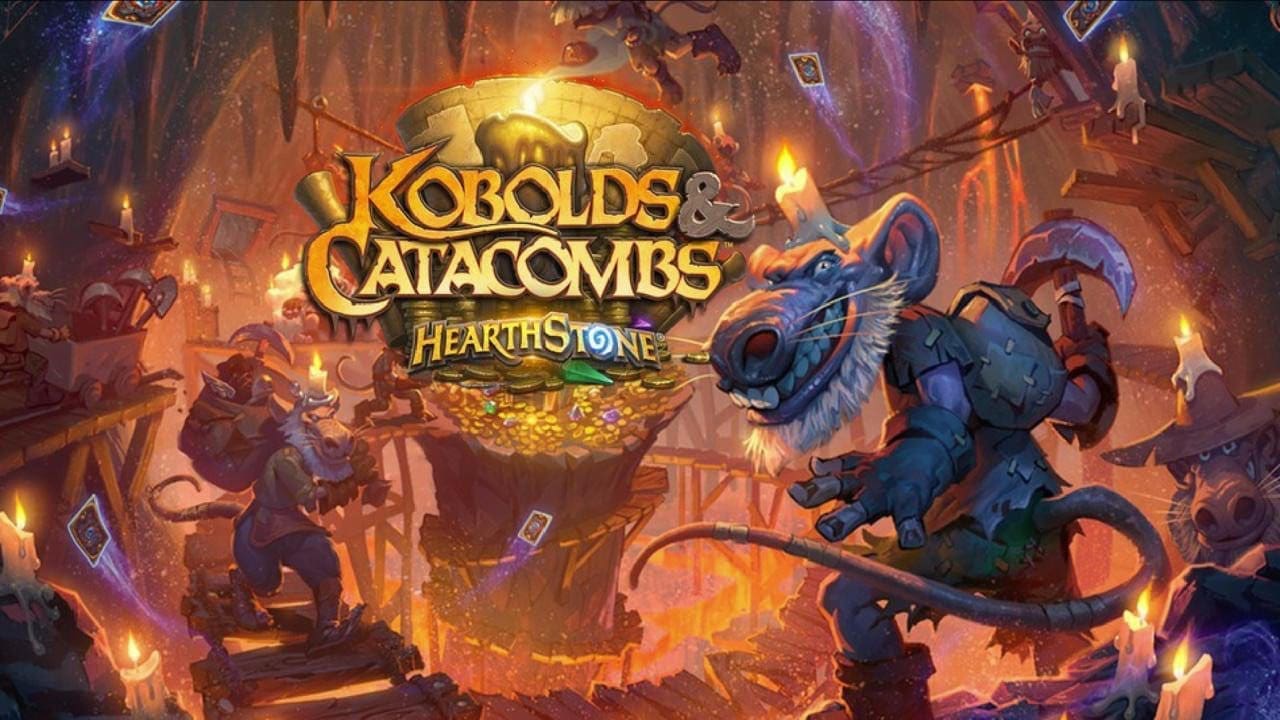 Kobolds & Catacombs takes Hearthstone players into the bowels of Azeroth, where the dastardly kobolds have been boring tunnels for thousands of years and hiding away scores of ancient treasures. Hearthstone players will discover powerful new cards among these riches, including a Legendary Weapon for each class—one of which everyone who logs in to Hearthstone starting today will receive free. Rumors also speak of mighty Spellstones, magical jewels for each class whose effects grow in power throughout a match. Ever-wary of greedy adventurers’ plots to liberate their hoards, the kobolds have lured terrible monsters and laid deadly traps to help protect them. Luckily, adventurers don’t have to go it alone. By playing cards with the new Recruit keyword, players can summon random minions directly from their decks, opening the door for entirely new approaches to deckbuilding.

The deadliest hazards of all await players in Kobolds & Catacombs’ new and completely free single-player mode: Dungeon Runs. These high-stakes subterranean adventures are inspired by the iconic fantasy dungeon crawl, and they’re never the same experience twice. Those brave enough to embark on these challenges can earn three free Kobolds & Catacombs card packs by completing a series of introductory quests. Players who complete a full Dungeon Run with all nine classes will also earn the “Candle King” card back—indisputable proof that they’ve mastered one of Hearthstone’s most daunting challenges yet.

“Kobolds & Catacombs harkens back to the type of old-school fantasy-gaming experience that many of us at Blizzard and in the community grew up on,” said Mike Morhaime, CEO, and co-founder of Blizzard Entertainment. “We think players are going to love the new cards and testing their mettle in Dungeon Runs, and we can’t wait to see how deck strategies evolve with the new mechanics we’ve added with this set.”

Kobolds & Catacombs is available now for Windows and Mac PCs; Windows, iOS, and Android™ tablets; and iOS and Android phones. Card packs can be purchased individually or in discounted bundles from the in-game Shop for gold or real-world currency at the same price as all other Hearthstone card packs. Players now have the chance to win Kobolds & Catacombs card packs as quest rewards or prizes in the Arena, and can also craft cards from the expansion by using Arcane Dust collected from disenchanting unwanted cards.

For a limited time, players who log in to Hearthstone will receive three free Kobolds & Catacombs card packs to celebrate the launch of the expansion—in addition to the ones earned from the introductory Dungeon Run quests.

Visit www.koboldsandcatacombs.com to learn more about the expansion and prepare yourself for the hazards and horrors that await you in the depths below Azeroth.

DELVE INTO THE UNKNOWN

The Kobolds have been digging beneath Azeroth for thousands of years, and along the way, they’ve discovered ancient artifacts—and terrifying monsters. Intrepid explorers who fully explore the dungeons will surely discover treasure beyond imagination . . . if they survive! Dungeon Runs are a new single-player mode coming with Kobolds & Catacombs where you’ll defeat dastardly bosses and collect their loot to build a deck that will keep you alive as you go deeper and deeper into the catacombs.