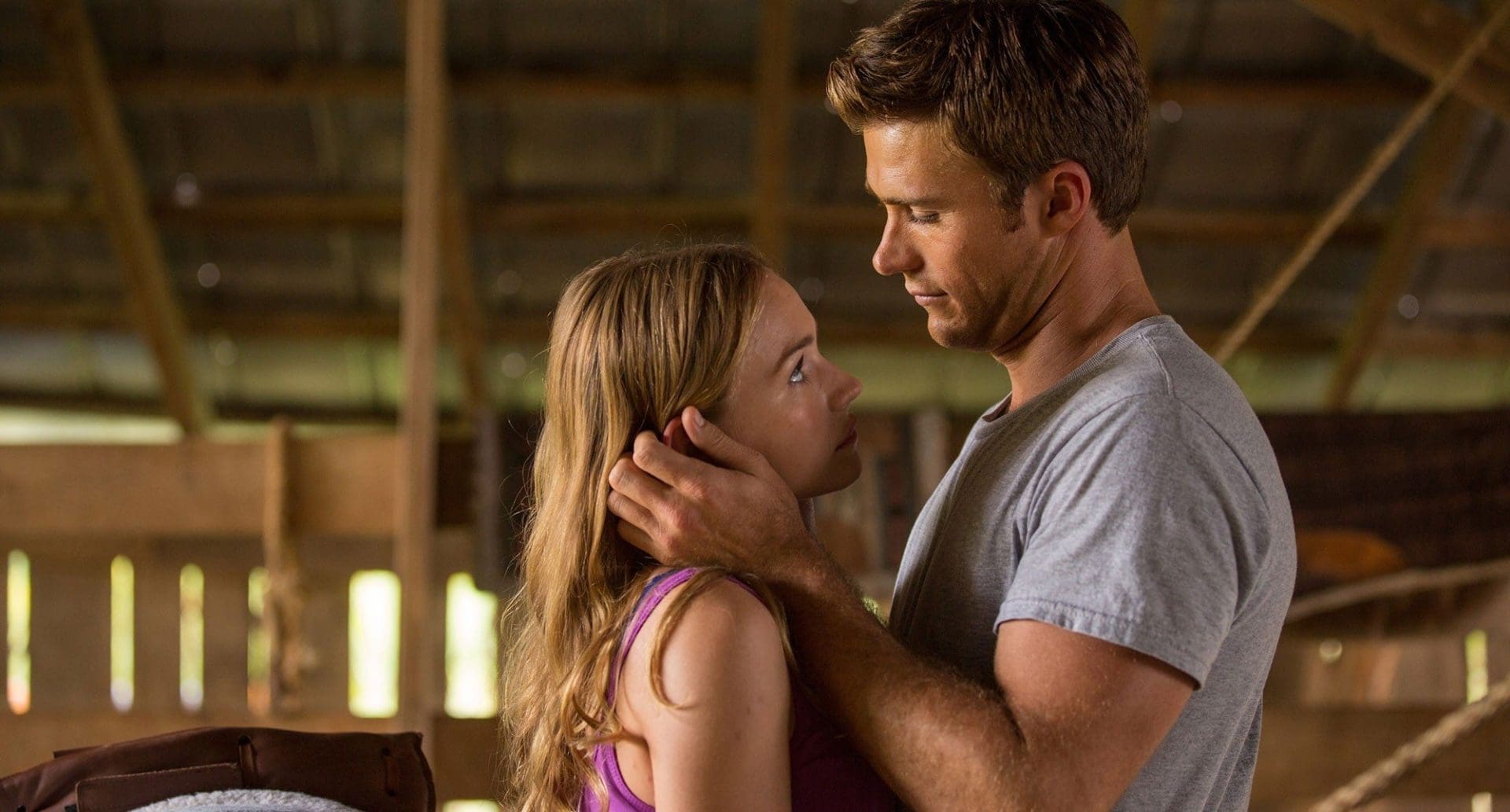 Ever since the Notebook hit the big screen, Nicholas Sparks has been Hollywood’s go-to author for romantic comedy adaptations.  Screenwriters and directors have been handed one book after another in the hopes it could turn into that next great hit.  Despite all these attempts, none have ever matched the intensity and chemistry of Ryan Gosling and Rachel McAdams.  Unfortunately this latest film is no exception, although it does offer two love stories for the price of one.

In The Longest Ride, directed by George Tillman Jr., Luke Collins(Scott Eastwood) is a professional bull rider in North Carolina who suffers a serious injury in the arena.  He continues to ride despite his mother’s objections and each ride could end up being his last.  Sophia(Britt Robertson) is an art major with dreams of working in New York City.  She is coaxed by her sorority sister into going to a rodeo and ends up seeing Luke perform.  They strike up a conversation and later one evening have a date on the lake.  Sophia informs Luke this relationship cannot last since she is leaving at the end of next month to pursue her career.  While they both ponder this rather awkward first-date conversation, they come across a car accident.  With the car still on fire, Luke removes an old man(Alan Alda) from the wreckage and Sophia removes a box of letters.

The old man’s name is Ira and at the hospital he develops a friendship with Sophia, who agrees to read his letters to him while he gets better.  The letters detail a relationship Ira had with his wife Ruth and the struggles they went through to make it work.  The movie flashbacks to 1940 where we see Ira try to woo Ruth.  It doesn’t go smoothly at first, but they fall head over heels for each other.  After an injury in the war, Ira can never have children, which complicates Ruth’s plans for a big family.  Even with this setback, they fight to make it work.

The movie uses Ira’s story of a couple with a very difficult problem to overcome as a way to help Sophia figure out how to make her relationship with Luke work.  Luke tries to see what life would be like in Sophia’s world, even attending one of her art gallery jobs.  Their lives end up in a culture clash, more him than her, but they are too committed to let that deter them.  The only real problem Sophia sees is Luke’s debilitating injury and his imminent death if he continues riding.  She misses a big opportunity in New York when Luke is injured again.  Luke is just too stubborn to give it up and doesn’t see a future in New York anyway.  He also relies on his earnings to keep his mom’s ranch afloat.  It would seem like a no-brainer for any normal person in this situation.  He should find a safer job so his mom doesn’t have to worry and let his girlfriend pursue her career in art, but no he has to keep both his mom and girlfriend on edge until he can make one last attempt to tame the wild bull that broke him.

The biggest issue The Longest Ride suffers from is the dialogue.  While a romantic movie doesn’t have to be completely realistic, when a character uses lines like “It’s just 8 seconds. She could be the rest of your life.” you half-expect a funny retort or at least some sentimental back and forth.  Joss Whedon would have given us that.  I’d even go for a nice Gilmore Girls-style conversation.  Every time Sophia spoke to Luke, Luke should have said something interesting back.  Instead we get huge pauses and a relationship so bland, you’d expect the Seventh Heaven theme to cue up any moment.

Sophia’s love for art and Luke’s bull riding is their second best asset.  They are a very attractive couple and that is what stands out about them.  Scott Eastwood can thank his father for those good genes.  The better story comes in the flashback when we get to see how Ira and Ruth maintained their marriage despite Ira’s infertility.  Ruth becomes an elementary school teacher and Ira continues to look after his antique shop.  Ruth tries desperately to adopt one of her students, who lives in a bad home, to no avail.  It’s a heartbreaking tale and one I was way more interested in watching.  Instead we get the stubborn bull and his girlfriend.

Another problem that plagues almost any Nicholas Spark movie is the not-so-subtle soundtrack.  Are these two lovers having second thoughts?  Why not have a song with lyrics that describe just that.  Are our main characters on top of the world?  No need to draw that conclusion on your own.  We’ve got you covered with a tune that narrates the whole thing.  It adds to the cheesy atmosphere of this film.

In spite of all his flaws, Luke has his charm and you can see Scott Eastwood does approach his character with a slightly unique style.  Sophia is way too committed to this relationship after only one date and should focus more on her work, but her heart is set.  She confides in Ira and he enjoys seeing her try to make up her mind.  His letters help guide her, but he provides one last bit of help near the end of the film that isn’t so much good advice as it is a convenient ending.

The Longest Ride is a decent romantic film with a strong message, though not completely original.  Scott Eastwood does have real talent and I look forward to his work.  I only hope he’s given better lines to say.  Britt Robertson holds her own as well.  This movie may not ignite their careers, but at least it gets their names out there.  Here’s to another Nicholas Sparks adaptation next year.

About The Longest Ride

Synopsis: The lives of a young couple intertwine with a much older man as he reflects back on a lost love while he’s trapped in an automobile crash.