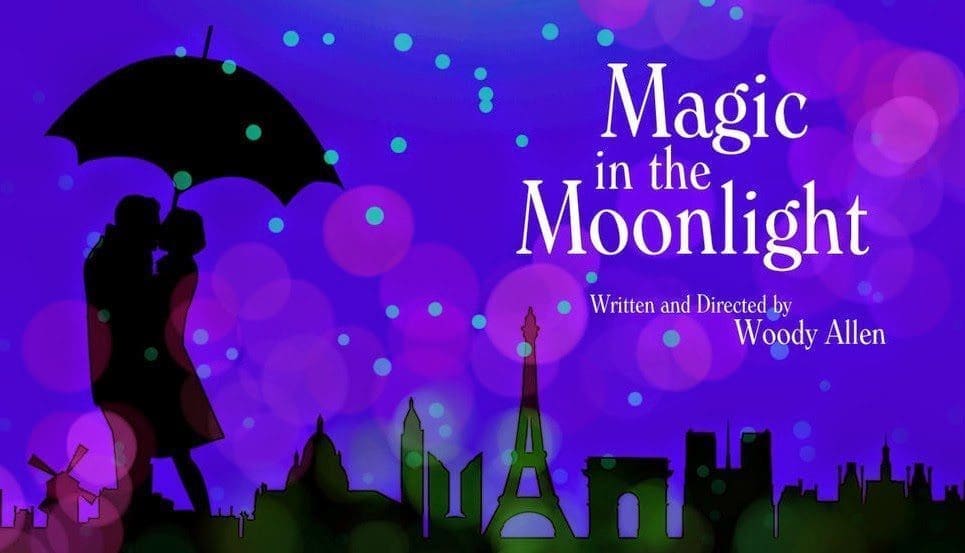 The creative talents of Woody Allen are well established.  If you visit his early works in the 60’s and 70’s, you will find clever, thought-provoking, hilarious writing with the actors to match. Annie Hall alone is enough to discuss in a film-making class for an entire semester. Two lovers with intellectual compatibility and flawed personalities, but also a genuine relationship the audience can connect with.  The movie dances with ideas and natural humor as we are introduced to one character study after another.  These days, that humor is packaged into more contemporary stories and simple narratives.  While I’ve been told Midnight in Paris is a pleasure, his more recent efforts have been on the safe side.

In Magic in the Moonlight, written and directed by Woody Allen, Stanley (Colin Firth) plays a magician disguised as a Chinese illusionist.  He is jaded about the wonders of the world and believes there is a rational explanation for the unexplained, which leads to the introduction of Sophie (Emma Stone).  She is passing herself off as a real psychic and is currently spending her time and talents in the south of France with her mother (Marcia Gay Harden).  Stanley’s best friend Howard Burkan (Simon McBurney) is skeptical of her abilities and invites Stanley to France in the hopes that he can unmask this deception before Sophie swindles any more money from rich families.  If Stanley is good at identifying tricks, Sophie is even better at concealing them; and so a playful exchange of words between our main characters begins.

The movie is set in the 1920’s, which is almost easily identified by the jazz music Woody Allen likes to add to his soundtracks.  Fortunately, it compliments the story very well.  The story is not that engaging, but Emma Stone and Colin firth are great on screen together.  The only other character that works even better with Colin Firth is his character’s Aunt Vanessa played by Eileen Atkins.  Her spirited energy adds some much needed personality to this plot and provides guidance for Stanley as he tries to reevaluate his stony disposition in the face of mystery and charm by way of Sophie.

The humor is derived from Colin Firth for the most part, but Emma Stone does her fair amount too.  Stanley is never short of a witty insult or clever retort.  Occasionally, he takes forever to say the simplest of things.  He uses his vocabulary like a paintbrush instead of a notepad.  It reminds me of some of the characters Hugh Grant played in his early days, but more ill-tempered.  His feelings remain unobtainable, but each day without success at unraveling Sophie’s master plan, you can tell he isn’t quite so certain his rational outlook is the answer anymore.

What we have here is a mildly entertaining film with talented actors giving a performance you come to expect from them, but the story could have been expanded upon, and it’s too similar in nature to other romantic comedies.  The length of the film is a benefit.  It doesn’t wear out its welcome, but it does leave you wishing there was more to go on.  If you enjoy Colin Firth or Emma Stone, while not their best work, it’s still fun to watch.  Eileen Atkins, who could have been in more scenes to be honest, is also a treat.  I give Woody Allen praise for his directing skills, but his writing could use more inspiration.  If you haven’t seen Annie Hall, I highly recommend you do.  It elevates the idea of a romantic comedy and gives you something to think about.

About: Magic in the Moonlight

Synopsis: A romantic comedy about an Englishman brought in to help unmask a possible swindle. Personal and professional complications ensue.