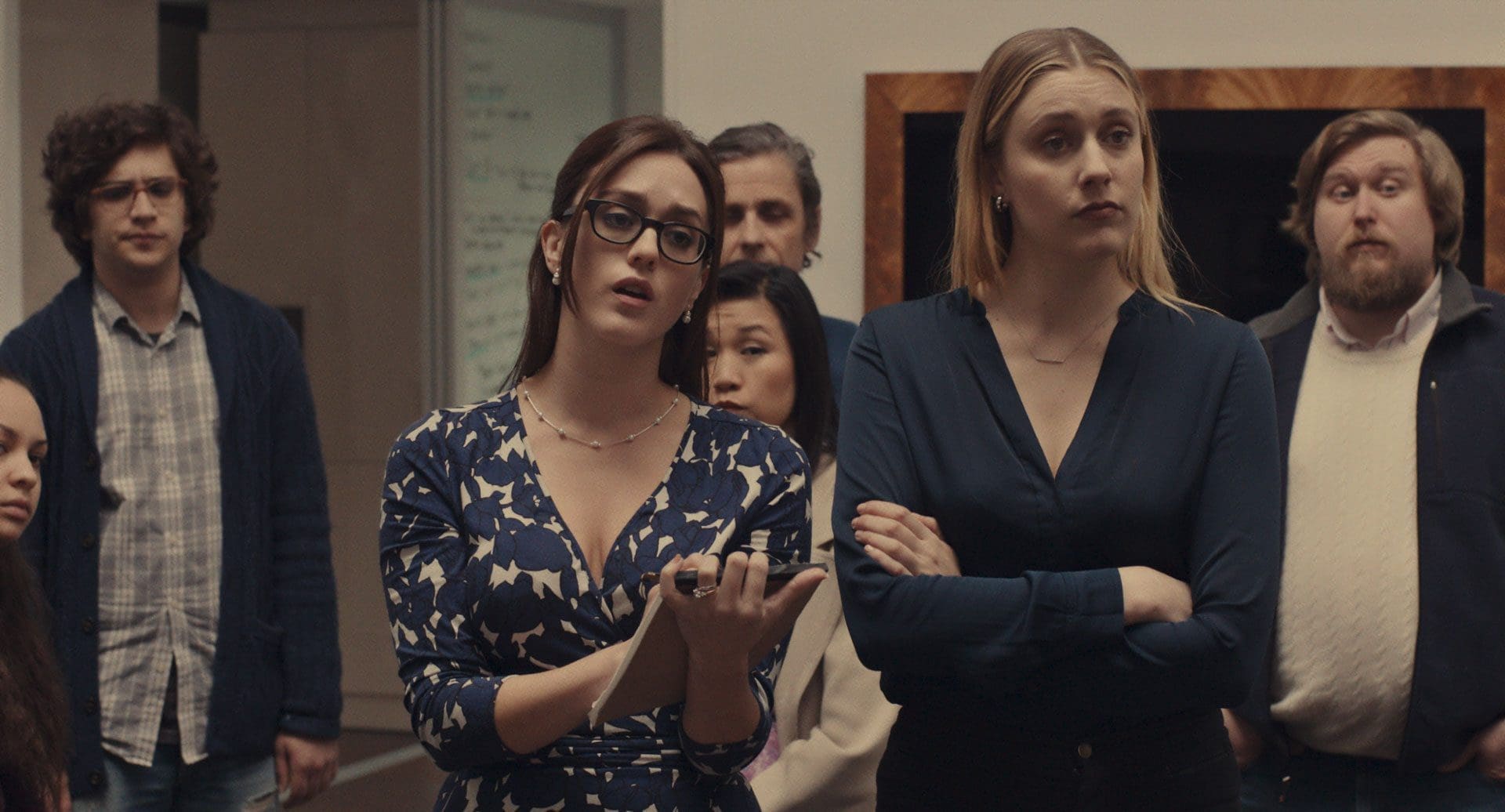 There are few moments in life that fill you with so much anxiety and confusion.  One such moment is leaving home and going to college.  You can have it all planned in advance, writing every last detail down, consulting with counselors, and planning your entire schedule for the next couple years; but once you arrive you realize it’s a whole new chapter in your life and you can’t quite figure out where to begin.  First thing is finding a support group that will help you stay on track.  Help you find your identity as you contemplate your ideals and goals while doing shots and reciting poetry for fun.  Experiencing all this and living in New York City would make one very interesting story.  Oh and by the way you’re getting a sister-in-law.

In Mistress America, directed by Noah Baumbach, Tracy (Lola Kirke) is starting her first semester at college and is studying to be a writer.  Her attempts to use her short stories to get accepted into a literary society prove unsuccessful; and the one guy who shares her interests and enjoys her company finds affection elsewhere.  After having a conversation on the phone about her mom’s upcoming nuptials, Tracy learns her future sister-in-law is nearby and decides to introduce herself.  She meets Brooke (Greta Gerwig) who is as ambitious as she is energetic.  What transpires is an evening of bar hopping and indie band music.  Brooke lives near Times Square and has several part-time jobs such as tutoring and interior decorating.  She hopes to open a restaurant with the help of her boyfriend and his fellow investors.  As Tracy and Brooke become closer, Tracy discovers her best short story yet acting out before her and Brooke begins to realize she doesn’t have it all figured out.

I will say that the movie starts off quickly, jumping from scene to scene like one-frame comic strips delivering funny quips about life’s foibles.  It almost wants to drive off without you and not even open the door, but eventually the movie does let you in.  What keeps you holding on is Noah Baumbach’s writing, supported by Greta Gerwig as well.  He creates interesting, sophisticated characters and gives them dialogue that engages you and makes you want to repeat it.  The dialogue comes at you so fast and from so many directions, but it’s executed like a well-choreographed ballet.  It’s scripts like this that always make me reference the Gilmore Girls.  Only in TV and movies can characters always have the perfect thing to say, but it’s so entertaining to watch.

I was very impressed by Greta Gerwig’s performance, who has worked with Baumbach before, and how her character Brooke developed as the story unfolded.  Brooke knew how to escape an embarrassing situation or a setback without assuming responsibility or sympathy, but eventually she does learn to open up.  Otherwise this newly acquired bond of sisterhood would have been futile.  Despite all of Brooke’s mistakes, you still believe anything is possible.

Lola Kirke as Tracy is terrific.  Her struggle to find success as a writer in college and try to avoid her responsibilities, while seeking inspiration in her sister-in-law, is endearing and fun.  Tracy almost comes off like a John Hughes character.  She has so much talent, but her insecurities leave her stuck in place without any real progress.  Once she sets off on her journey to help Brooke, things take a turn and you see her gain that much needed confidence.

The score of the film takes on an 80’s vibe with synth pop beats throughout.  It adds an element of lightheartedness to the emotional subject matter.  Both Tracy and Brooke are assessing their choices in life and making changes for better or worse.  It’s definitely an homage to the John Hughes films of yesteryear, but it’s also pure Baumbach.  When the film makes its way to Greenwich and Brooke attempts to acquire money from an old friend, the movie comes alive.  I couldn’t get enough of these wacky, yet authentic people and their idiosyncrasies.  I particularly enjoyed meeting Brooke’s ex-boyfriend Dylan (Michael Chernus).  He inadvertently provides that extra piece of depth to Brooke’s story.

Mistress America is not a perfect film, however it is a very welcome alternative to the summer onslaught of brainless entertainment in the theaters.  The film rushes by you like an actual short story, which I imagine is by design, and some of the characters aren’t as developed or fully dimensional as I would have preferred, but the chemistry among all involved is an achievement and the movie does finish strong.  I also enjoy a good New York misadventure.  The city inspires creativity and expressionism.  It may not all go according to plan, but at least you’ll leave with a nice story to tell.

Synopsis: A lonely college freshman’s life is turned upside down by her impetuous, adventurous soon-to-be stepsister.