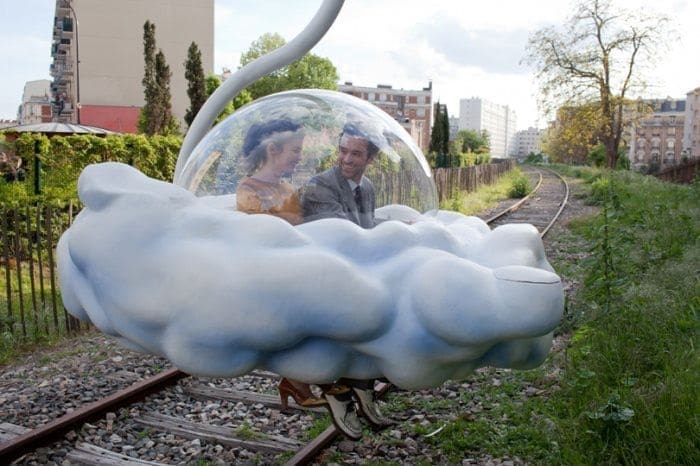 Director Michel Gondry likes to take very simple stories of love and torment and wrap them in a surreal atmosphere that is both beautiful and intimate. Whether he’s erasing Jim Carrey’s memories of his former girlfriend in Eternal Sunshine of the Spotless Mind, or making us question the reality of a man pursuing his neighbor’s heart in The Science of Sleep, Gondry’s imagination is unmatched in its ability to demonstrate statements in artistic expression. His latest effort brings out that imagination in full force.

In Mood Indigo, Colin (Romain Duris) is a fairly wealthy socialite in France who enjoys exquisitely prepared meals by his servant Nicolas (Omar Sy).  His house is quite animated, literally.  A small mouse crawls around the walls; and whenever the doorbell rings it becomes a mechanical spider that must be caught.  We even see the inside of Colin’s mind as a hundred typists input his thoughts on paper.  When his friend Chick arrives, Colin discovers that he is the only one of his company that isn’t in love.  So he makes a quest to discover that special someone. With a little help from some close acquaintances, he meets Chloe (Audrey Tautou) at a party and they connect almost instantly. He makes grand gestures of romance and they eventually get married.  Chloe does, unfortunately, suffer a terrible illness and Colin must try everything to save her life as her health drastically deteriorates.

The story is told in such a visual way as we follow Colin and Chloe on their adventure through the city and countryside.  They share fun moments in odd places.  Colin’s feelings and thoughts are portrayed occasionally as strings of light.  His mind is sometimes too easy to read so he tries to hide his emotions.  All his friends seem to live within this reality, which appears as fantasy to us because we are viewing both as one thing.  When things are pleasant, there is bright music and dancing in the air.  When the story turns depressing, the light fades and the rooms even appear dilapidated and worn.  The main theme of finding pure love and sacrificing everything and everyone that came before it in order to keep it alive is executed with brilliant imagery.

The name Mood Indigo is derived from a Duke Ellington song and refers to the emotional core of the film.  When life is constantly trying to throw you off balance between happiness and despair, you have to do your best to weather it even if your emotions say otherwise.  Chloe is also the name of a song by Ellington.  She personifies the sounds of that song.  A gentle soul with an exuberant spirit.  The kinetic energy of Colin certainly compliments that curious nature.

You will feel, at first, like you’re watching a crazy dream or maybe a 50’s French version of Pee Wee’s Playhouse.  It’s nothing short of unique and I’ve come to expect this from Gondry’s work by now.  The film can sometimes seem like too much imagination, but eventually it does slow down as the tone changes emotionally.  Our characters face serious situations that can’t be avoided and they endure it no matter the cost.  Every emotion and thought is presented in some form or another with the use of stop-motion animation or literal interpretation.  Colin tries his best to maintain the cheery life he once knew, but, with his wife fading away before his eyes, he has to cope with the realities that slowly surround them both.

Our main actors, especially Omar Sy, are a joy to watch.  They clearly are having fun on-screen, which brings you closer to this world.  The star though is the narration told with passion in its imagery.  The scenes leap out at you with whimsy and humor, but through these moments lie the sincerity of hope and remorse.  A shared experience that is communicated not only to us, but every character affected by Colin and Chloe’s love story.

I recommend this very much to anyone who enjoys a creative take on a standard love story or just loves Michel Gondry’s visonary style.  There is beauty all around us and even in our own minds, and it’s a tragedy to let that imagination go unnoticed.  Luckily we have directors like Gondry to show us not only what is possible, but to encourage us to embrace our own dreams and communicate them in any way we see fit.

Synopsis: Wealthy, inventive bachelor Colin endeavors to find a cure for his lover Chloe after she’s diagnosed with an unusual illness caused by a flower growing in her lungs.