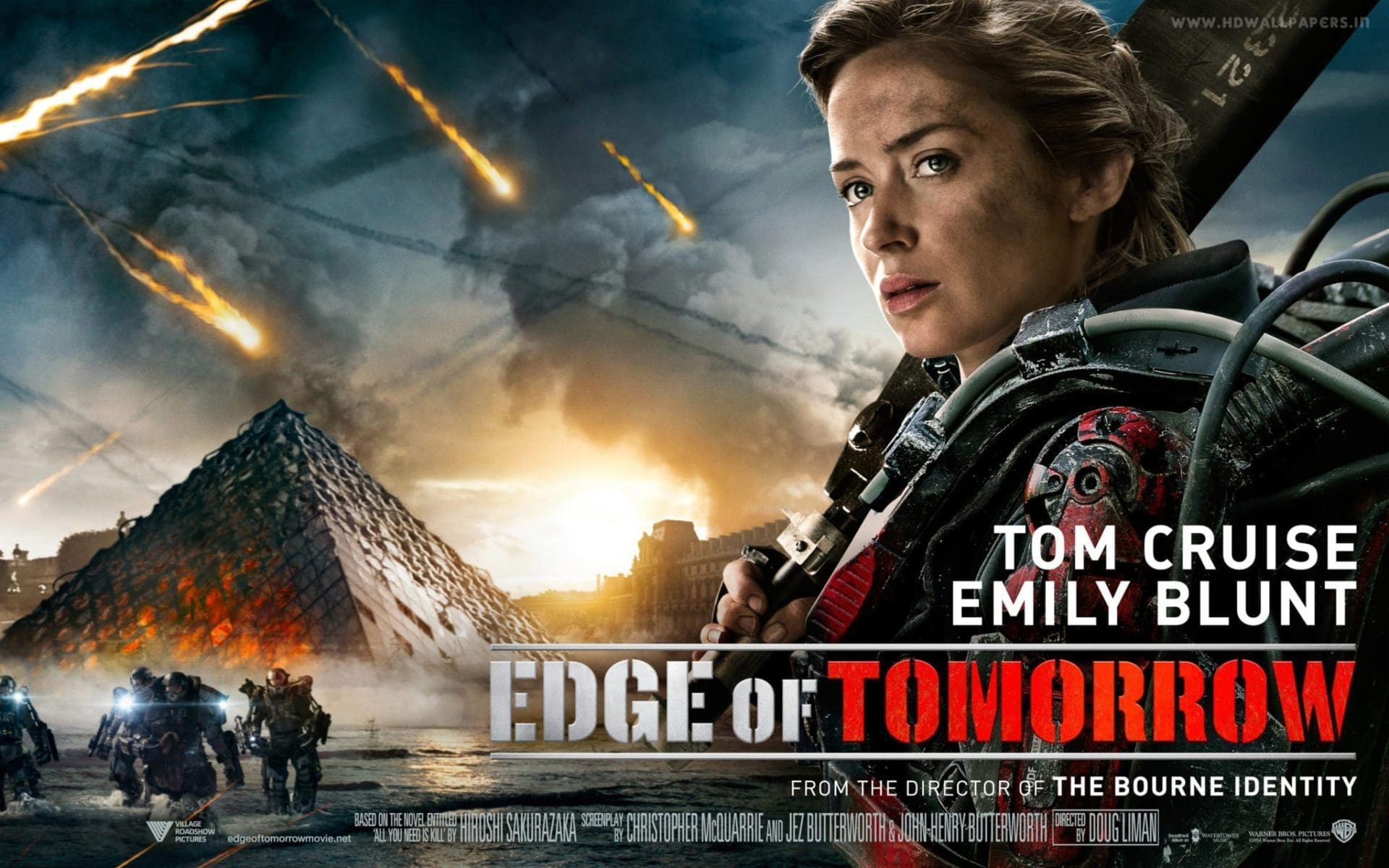 If there’s one important note to be made about Edge of Tomorrow, it’s that the marketing team at Warner Bros. did a less than stellar job at promoting the movie. Judging by the previews alone, Edge of Tomorrow seems dark and grim, with a lot of violence and very little heart. While there are moments in the film in which things do look grim, not a single trailer really showcases the movie properly.

If you’ve seen just about any of the marketing materials for this movie, you know that Edge of Tomorrow is a film about the end of the world. Aliens are invading, and it looks like we can’t stop them. Giving a nod to Groundhog Day, Cage (Tom Cruise) gains the power to relive one day over and over again. It’s a power that was taken from the aliens, and the reason why it’s been so difficult to defeat them.

What you don’t see in the trailers for Edge of Tomorrow is that this movie is a lot of fun. Director Doug Liman sends Cage, Rita (Emily Blunt), Master Sergeant Farell (Bill Paxton) and a group of troops on a thrilling, and often humorous adventure. Cage repeats one very important day in the war over and over again, and with that he starts to remember the day down to the exact wording of his military comrades, and the precise movements of the alien invaders. However, in order to get to that point, Cage has to go through a lot of random deaths and genuinely funny encounters.

While Edge of Tomorrow is much lighter than you would expect it to be, humans are in danger of losing the war and the movie gets serious when it needs to. Once you accept the fact that Cage is reliving the same day over and over, you don’t have to stretch your imagination much further. The movie doesn’t make things overly convenient, and the story doesn’t progress by having things just fall into Cage’s lap. He has to work for everything and the film moves along at a good pace to ensure that the audience doesn’t get bored in the process.

There’s even a subtle romance that’s developing in the background. It’s just enough to make you feel a bit more for the characters, but not so much that you can’t wait for the next action sequence. In fact, while the explosion are engulfing, and the World War II-like invasion can be discerning, this isn’t a Michael Bay film. The war is there and you feel the pressure on the humans to win, but Edge of Tomorrow has so much more to offer than simply repeating combat scenarios over and over.

Tom Cruise is back in top form as his interactions with Emily Blunt, Bill Paxton and his platoon are some of the best in the film. Even though you only really get to know the supporting cast through their interactions with Cruise and Paxton, by the end of the film they all become characters that you feel for. You don’t want to see them die, but the movie isn’t foreshadowing enough to really know how things are going to end.

Speaking of the ending, in a movie like this the ending is key. Luckily, Edge of Tomorrow has a solid ending that ties everything together and doesn’t make you throw your hands into the air in disgust. In fact, it’s hard to say anything bad about the movie aside from a couple of borrowed sci-fi trends. The aliens feel as though they were a copy and paste job from The Matrix (another Warner Bros. property), and the exo-suits that the humans wear feel as though they could’ve been ripped directly from the Elysium production team. However, it’s hard to say anything else negative about the film.

Edge of Tomorrow offers a little something for everyone. There’s plenty of sci-fi fun, a lot of action, a good amount of humor, and even a touch of romance. It’s hard to imagine too many people not enjoying the movie, unless you’re strictly anti-science fiction films. Don’t let the trailers for the movie turn you away, this is one of the best movies of the summer thus far.

About Edge of Tomorrow

Synopsis: An officer finds himself caught in a time loop in a war with an alien race. His skills increase as he faces the same brutal combat scenarios, and his union with a Special Forces warrior gets him closer and closer to defeating the enemy.

it kind of remind me of kenny, “oh my god, they killed tom cruise”, i enjoyed watching it.