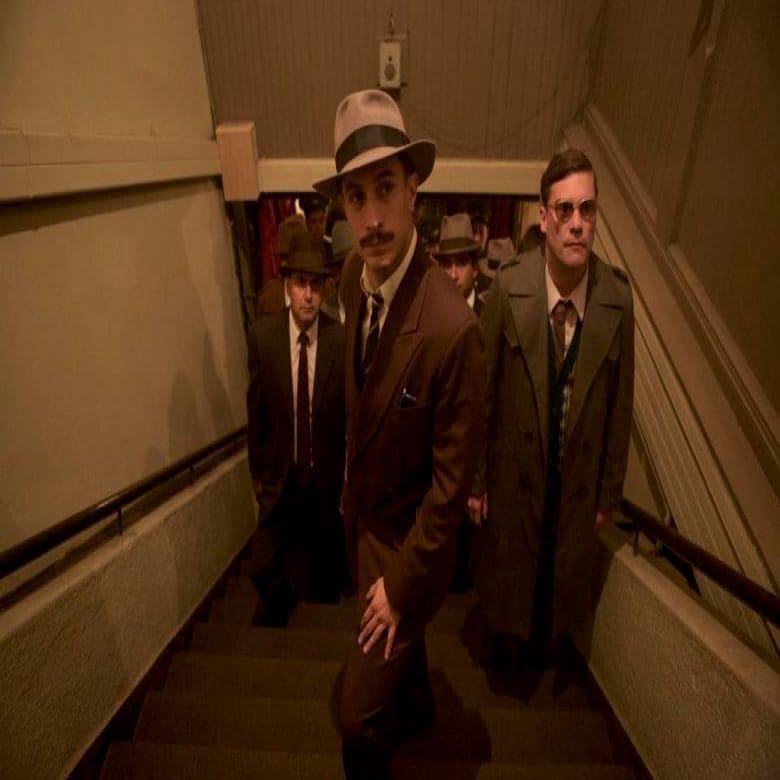 History is full of interesting characters.  Iconic names that we can easily recall more than the backstory associated with them.  It is always a pleasure when someone takes up the monumental task of condensing a person’s life into a novel or feature film.  What do you leave out and how does your opinion of the subject affect the portrayal?  Perhaps a specific point in a person’s life is so rich with intrigue that it warrants its own film.  Or maybe it would help to flesh out a character before diving into one of his most important moments in history.

In Neruda, directed by Pablo Larrain, Pablo Neruda (Luis Gnecco) is a well-respected senator and accomplished poet living in Chile with his wife.  It is 1948 and the communist party is no longer tolerated.  Many civilians are being rounded up and detained as political prisoners.  Neruda’s association with the communist party has begun to attract the authorities, leaving him with no alternative but to hide.  Since he has many supporters, including the now secretive communist party, he is able to find refuge in various places across the city.  The one man tasked with his pursuit and capture is Oscar Peluchonneau (Gael Garcia Bernal), a police officer with a chip on his shoulder and a determination to see justice done.  Oscar narrates the film and provides us with incite into his personal convictions and his opinions of Neruda and the political system.  Oscar believes his entire career depends on completing this mission, which is why he will stop at nothing to find him.

This film is a snapshot of Pablo Neruda’s life and seems to give you the faintest glimpse of who he is and where he came from.  Since I can recall very little about him from my time in school, outside of a lyric in Rent, I can only surmise, based on this movie, that he lived a life of excess and enjoyed the company of men and women.  He loved to write poetry and enjoys an audience to hear him recite his most popular works.  He is a generous man, but his generosity is just as large as his ego at times.  His obese presence and balding head are outmatched by his self-confidence and talent, which is made even more obvious by some of his adoring fans.  While this film does convey his strong personality, it is unsuccessful in allowing us to connect to him on an emotional level.

My biggest issue with this movie is the tone as well as how it is edited.  It always feels just shy of reality and the narration makes you feel as if you are watching a recreation rather than an actual moment in time.  It tries to interject humor where it’s not warranted. You can tell part of the objective is to present a story where the lives of two characters are intertwined, but you never feel like their in the same movie.  One is a biographical tale of exile and poetic rebellion.  The other is a noir, tragic comedy of a cop trying to find his assailant and struggling at every turn.  I love Gael Garcia Bernal and I get excited when I see his name in the credits, but I feel his character in this movie is just misused.  Some of his character is salvaged near the end of the movie, but it’s too little too late.  I also felt that several scenes are put together haphazardly and don’t properly move the plot along.  One moment our characters are saying a line and then finishing that same line in another scene.  Are we to assume they just moved to a new location and repeated the same conversation?

Neruda is a film that is not constructed well, but offers some merit in it’s depiction of the main character.  Luis Gnecco has a mesmerizing on-screen presence and gives Neruda that intellectual allure he is known for.  The locations and costumes are a pleasure to watch.  I can identify certain scenes that drew my attention, but overall there wasn’t any real momentum or emotional center keeping me engaged.  I either would have preferred another director take a crack at this chapter in Neruda’s life or explore more years of his time spent in Chile.  I’m sure those movies have already been made.  It’s important to know how to present your subject and, if you have a unique angle you want to tackle, to communicate that properly with your audience so they aren’t left scratching their heads.  Poetry is a beautiful form of art and language, but it isn’t always the best way to tell a story.    In this case I’d leave that to Pablo Neruda himself.

Synopsis: An inspector hunts down Nobel Prize-winning Chilean poet, Pablo Neruda, who becomes a fugitive in his home country in the late 1940s for joining the Communist Party.

Like Found-Footage Horror Anthologies? Then You Must See ‘V/H/S/2’!