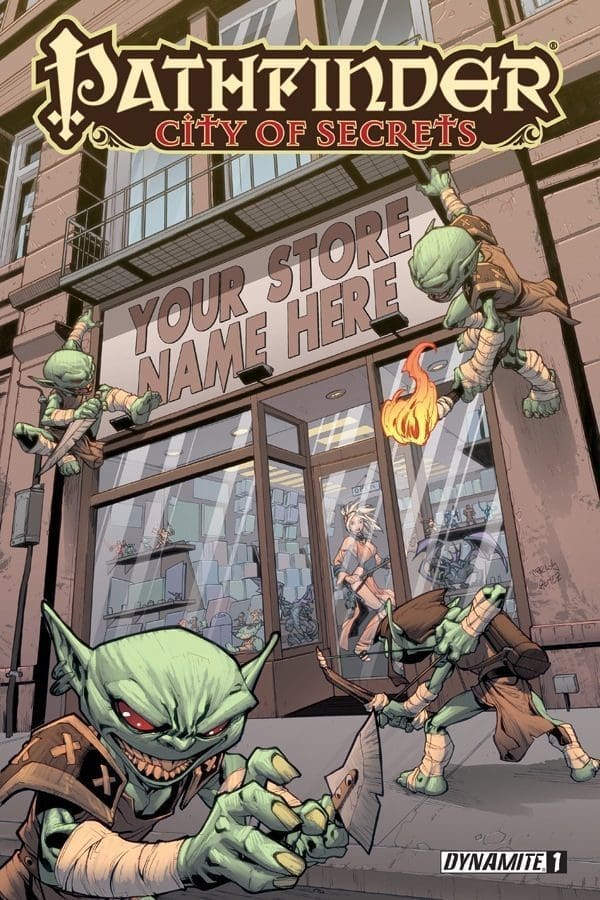 REDMOND, WA – Paizo Inc., publisher of the world’s best-selling Pathfinder Roleplaying Game, as well as novels, game accessories, board games, and the wildly popular Pathfinder Adventure Card Game, along with Dynamite Entertainment, announce today the kick-off of the Heroes of Magnimar Contest, in celebration of next month’s release of the new comic book series,  Pathfinder: City of Secrets.

In the Pathfinder: City of Secrets Heroes of Magnimar contest, Pathfinder players will have a chance to submit a 300-word description of their hero to a team of judges at Paizo. Five winning submissions will have their descriptions translated to game statistics, and Dynamite’s artists will bring those characters to life. Each issue ofPathfinder: City of Secrets (starting with issue #2, scheduled for a June release), will feature a single winning Hero of Magnimar, and that hero will become an official part of the Pathfinder universe. In further celebration of the new series’ release, Dynamite and Paizo will be organizing special in-store Pathfinder game events, in which chosen local comic stores will become part of the story and game play. Comic shops interested in participating should visit the official City of Secrets Comic Store Invasion event page at paizo.com/pathfinder/comicinvasion.

Pathfinder: City of Secrets #1 is written by returning superstar writer Jim Zub, with interior art by Leandro Oliveira and cover art by Genzoman, Carlos Gomez, Sean Izaakse and Steven Cummings. This issue marks the beginning of a new adventure series and is the perfect starting point for new readers. Each issue also includes an exclusive Pathfinder Roleplaying Game encounter, and a bonus playable tactical map/art poster. Issue #1 debuts May 21, 2014worldwide.

The Pathfinder Roleplaying Game is the world’s best-selling tabletop RPG, in which players take on the role of brave adventurers fighting to survive in a world beset by magic and evil. The Pathfinder RPG is currently translated into multiple languages, and the vibrant Pathfinder universe has been licensed for comic book series, graphic novels, miniatures, plush toys, apparel, and is being developed into a massively multiplayer online roleplaying game.

Dynamite was founded in 2004 and is home to several best-selling comic book titles and properties, including The Boys, The Shadow, Vampirella, Warlord of Mars, Bionic Man, A Game of Thrones, and more.  Dynamite owns and controls an extensive library with over 3,000 characters (which includes the Harris Comics and Chaos Comics properties), such as Vampirella, Pantha, Evil Ernie, Smiley the Psychotic Button, Chastity, Purgatori, and Peter Cannon: Thunderbolt.  In addition to their critically-acclaimed titles and bestselling comics, Dynamite works with some of the most high profile creators in comics and entertainment, including Kevin Smith, Alex Ross, Neil Gaiman, Andy Diggle, John Cassaday, Garth Ennis, Jae Lee, Marc Guggenheim, Mike Carey, Jim Krueger, Greg Pak, Brett Matthews, Matt Wagner, Gail Simone, Steve Niles, James Robinson, and a host of up-and-coming new talent.  Dynamite is consistently ranked in the upper tiers of comic book publishers and several of their titles – including Alex Ross and Jim Krueger’sProject Superpowers – have debuted in the Top Ten lists produced by Diamond Comics Distributors. In 2005, Diamond awarded the company a GEM award for Best New Publisher and another GEM in 2006 for Comics Publisher of the Year (under 5%) and again in 2011. The company has also been nominated for and won several industry awards, including the prestigious Harvey and Eisner Awards.

Paizo Inc. is publisher of the world’s best-selling Pathfinder Roleplaying Game, the wildly popular Pathfinder Adventure Card Game, as well as Pathfinder Tales novels, board games, and gaming accessories. Paizo.comis the leading online hobby retail store, offering tens of thousands of products from a variety of publishers to customers all over the world. In the eleven years since its founding, Paizo Publishing has received more than 50 major awards and has grown to become one of the most influential companies in the hobby games industry.

Down Darkened Paths, An Anthology

“Guardians of the Galaxy #12” Comic Review