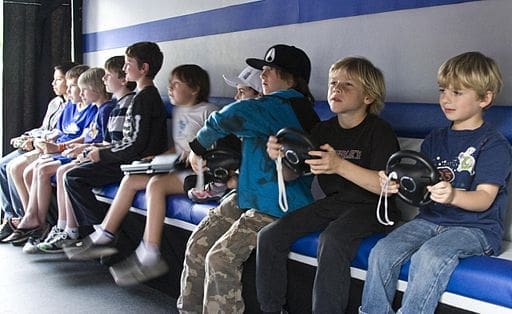 Plenty of video game misconceptions abound, from accusations that they’re a complete waste of time to people trying to pin horrible tragedies as the fault of video games. The Entertainment Software Association reports that the video game industry is worth over $20 billion, with over half the country jumping on board to get their gaming on. Would you be surprised to find out that video games have tangible health benefits, from improving reflexes to increasing your critical thinking skills? Before writing off video games as a form of meaningless, non-beneficial entertainment, find out exactly what benefits research has uncovered with this popular form of entertainment. Photo by Gamesingear via Wikimedia Commons

If you’re resisting letting your toddlers play video games because you think they’re too young to start gaming, Deakin University released a study that reveals preschoolers (aged three to six) end up with superior motor skills thanks to video games. These children were split between interactive games, non-interactive games or a mix. They used the Wii and DS for the games, allowing the children to start things off with easy-to-control options. Object control motor skills were much improved with those who played interactive games.

Violent Videos Games are Not Automatically Bad for You

Every time a school shooting occurs, investigators and watch groups immediately blame the entire tragedy on video games. Research studies over the years have not found a correlation between acting out actual violence due to virtual violence in a video game. Pedestrian TV reports that the University of Melbourne has found many health benefits from moderate levels of gaming, such as improved mental health and reduced stress.

The stereotype of the lone gamer hanging out in the basement is nowhere near the typical gaming experience of today. Games with heavy online components such as “Battlefield 4” and “World of Warcraft” have extensive, far-reaching communities that provide a way for children and adults to learn social skills and expand their social circles. This is a particularly good benefit for people dealing with autism, since it exposes you to social situations on a consistent basis while having an activity to focus on at the same time.

Many research studies focus on the benefits for children, due to the industry opponents’ “think of the children” approach to attacking video games. However, the elderly also benefit from video game exposure. The University of Utah published a study revealing the usefulness of video games as therapy tools for older adults, especially those suffering from Parkinson’s disease. Video games provide benefits to these patients by giving the patients a reward system, improving their overall happiness, reducing stress and helping needed behavioral changes become adopted. Some health care providers implement incentive systems to encourage patients by using the video games as a reward. This kind of interactive entertainment also provides mental stimulation for patients, as it engages and motivates them.

Backspace: The Sci-Fi Skyrim-styled Game That May Never Be