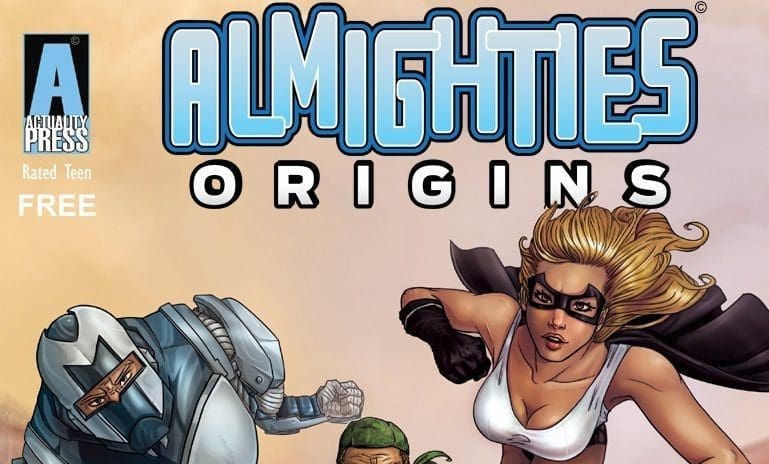 Digital comics are becoming more prevalent in today’s market, especially when it comes to independent works. Below is a press release for The Almighties, a super-hero team of not-so-standard heroes, which has a free #0 issue available online:

The White House is getting its own super-team… VERY off the record.

A former downtrodden housewife with anger issues, a mercenary with psychotic tendencies, a cocky British punk, an egomaniac, and a guy who runs a takeout.

This bunch of misfits may not sound like the ideal ingredients for a team, but The White House’s Joe Cyborg wants them!

“The Almighties were an eclectic super-team brought together by a dubious character called White Out to take on ‘threats to America’,” says the team’s co-creator/writer Sam Johnson. “However, thanks to an intervention from President Obama, it was revealed that White Out was in fact a Neo Nazi, playing the team for his own agenda. The Almighties promptly turned the tables on Whitey – bringing him down, along with his werewolf butler Chives and robot Hitler the Adolf 3000.

“This has brought them to the attention of one of The White House’s more mysterious operatives – Joe Cyborg,” continues Johnson. “Joe’s looking to put together his own secret strike force and has called in former Almighties member/Barack Obama aide/kabob shop owner Stefanos to review its would-be members with him.

“Despite their…‘quirks’…what The Almighties have shown is that they can work well as a team… and also be manipulated,” says Johnson. “We don’t know much about Joe Cyborg, but where he and Stefanos meet up isn’t The White House – it’s a swamp. Does this mean Joe can’t be trusted?” “Well,” laughs Johnson, “Whatever Joe’s agenda is, at least the team are going to be in better hands than a Neo Nazi, right”

Following their critically acclaimed, comedic debut The Almighties #1, you can get to know The Almighties – Ms. F, Mason, Nite Fang, Maxi-Tron and Stefanos – in the 7-page FREE Digital comic Almighties Origins. Written by Johnson (Geek-Girl, Cabra Cini: Voodoo Junkie Hitwoman) and co-creator Mike Gagnon (Classics Illustrated, Monkeys & Midgets),  illustrated by Eleonora Kortsarz, Pablo Zambrano & Ron Gravelle, and published by Actuality Press – the comic previews The Almighties #0 and sets up their adventures to come – and you can get it at www.thealmighties.com now!