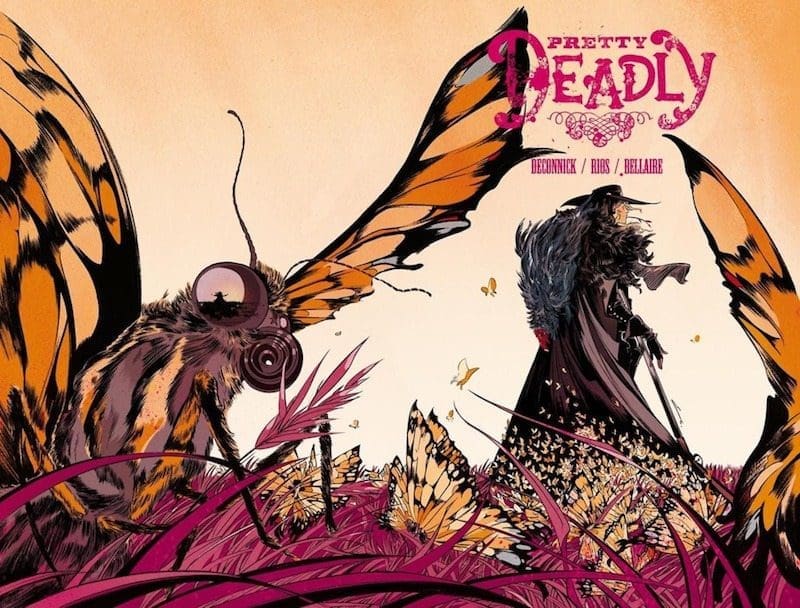 Pretty Deadly is a brand-new series from Image comics, and in this day and age, that means it is automatically worth looking at. Add in the fact that the book is written by Kelly Sue DeConnick and illustrated by Emma Rios and Pretty Deadly #1 becomes a must-buy. Delivered as a poetic revenge tale told through an old-timey Western veneer, Pretty Deadly won’t immediately click for all readers, and I’m speaking from the experience of someone that had to read the book through twice in order to decide on picking up a second issue. It’s not readily apparent at the end of this initial issue whose tale DeConnick is telling, but there is certainly enough interest surrounding the cast of shady and mysterious characters to keep me in for now.

DeConnick approaches the opening narration—a conversation between a bunny and a butterfly with a shocking page-turn moment—less like traditional dialogue and more like prose. Moving through one of the issue’s more attention-grabbing lines, “For a moment, I fear her like the bud about to blossom fears the sun” provides a natural transition for the rest of the narrative, which sees its lore delivered as if it were a poem or a song. Fittingly the issue is about two characters, one a vulture-cloaking-wearing girl named Sissy and one a blind gunman named Fox telling the fabled tale of Death’s daughter, Deathface Ginny, to an attentive Old West town. Into this first issue DeConnick also weaves a questionable onlooker named Johnny (with an important binder in his possession), a shotgun-toting stranger named Big Alice, and some vague character relationships creating a touch of intrigue but not a clear sense of which character will be the series’ focus going forward.

Opening the book there’s an immediate sense of seeing something wildly different, and that’s what Emma Rios’ art brings to Pretty Deadly. Her level of detail is unmatched, particularly in her depiction of the Old West town. Each passerby and onlooker has their own distinct look, giving the illusion of a living, breathing town rather than a static backdrop for the story to take place in. Rios’ panels are free-formed so that no two pages read the same way but it never disrupts the sing-songy flow of DeConnick’s words. Jordie Bellaire’s colors fully accentuate both of Rios and DeConnick’s contributions, and no sequence demonstrates this better than the telling of Deathface Ginny’s origin. No matter which of DeConnick’s characters takes the reigns moving forward, Pretty Deadly is guaranteed to look pretty damn good.