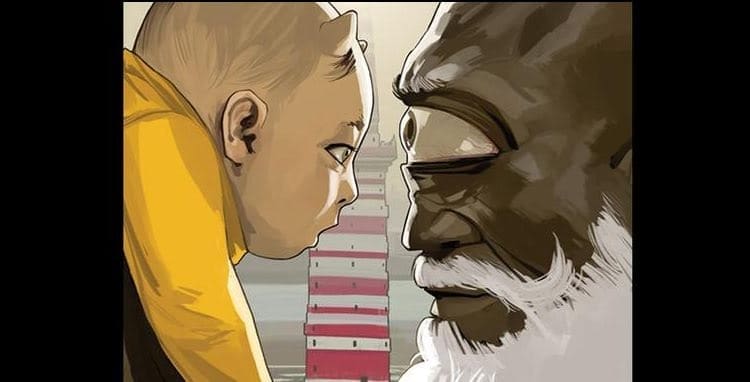 Saga #13 could have just been one of artist Fiona Staples’ gaze-stealing covers accompanied by 22 blank pages and I still would have been happy just to have something Saga-related in my hands after a feels-like-forever four-month hiatus. That being said, the latest chapter in this Romeo and Juliet-esque twisted science fiction tale is aimed more squarely at those that have just hopped aboard the Saga hype train rather than those of us that been along for the ride since the first issue. Acclimated readers will find less overall substance yet a hearty dose of character development that will no doubt serve to enrich the plot moving forward.

It’s through both the testimony of a Landfallian Army Sergeant and narration of baby Hazel that we get a brief recap of the events of Saga thus far: Marko and Alana have come together amidst the war between their two alien races and had a baby, Hazel, whom they are currently bringing to see D. Oswald Heist, the author of their favorite book. Marko’s father has died and his mother is worried that her granddaughter might be in danger. “Some of the many people who wanted us dead,” Hazel says in her always-astute narrations, “were right on our heels.” It’s a decent summation for new readers joining the fray.

Writer Brian K. Vaughan eases up on the physical threats to his characters in this issue to allow for a more character-centric development to the plot. Although our troop of heroes find themselves in an altercation with bone bugs in the middle of the issue, the true nature of this brief encounter is highlighting the conflict between Alana and Marko’s mother, Klara, over the protection of Hazel. In a series of panels beautifully rendered by Staples, Alana dispatches a giant bone bug with a swing of a mace in one arm, holding her child safe in the other. Not only in this proving in Alana’s abilities as a parent, but Vaughan is also once again showing why Alana is the paradigm for female characters in comics.

Saga #13 just wouldn’t be an issue of Saga without a bit of wily humor, a hefty portion of which comes through with the series’ own version of Han Solo, The Will. If you’re like me in thinking that The Will should just give up his crusade, settle down with Gwendolyn and adopt Slave Girl, there’s a certain no-armed, eight-legged, long-dead bounty hunter that feels the same way. It’s a relief that Vaughan cuts through the will-they-won’t-they escapade so early on, though I can’t help but have this looming suspicion that more tragedy is heading The Will’s way, especially now that Slave Girl has a name.

Saga #13 is not a direct continuation of the events of the previous installment; rather, Vaughan uses his clever writing to advance the characters while bringing the rest of the reading world up to speed. Given that Saga’s first and second volumes sold extremely well in the month of July*, I can’t blame him. Everyone should be on board Saga and hopefully after this issue, we all are. Now we can once again begin this crazy train.