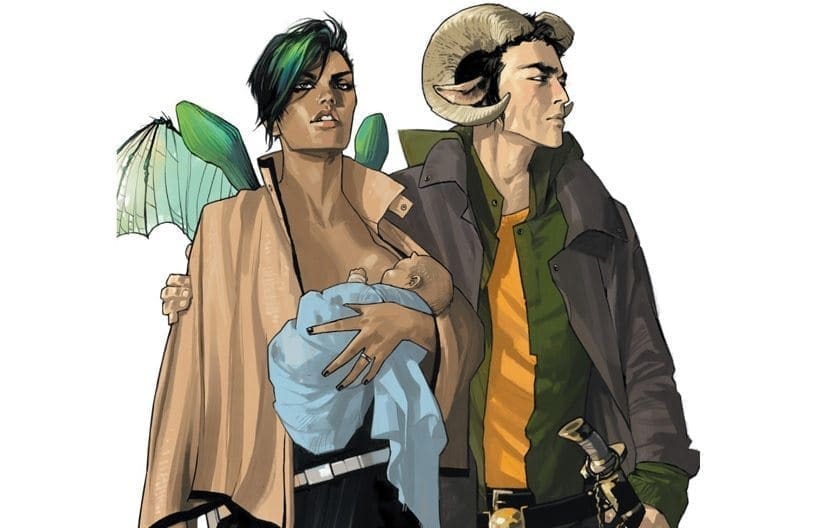 Saga’s been the talk of the comic town since it first hit stands back in March 2012, and rightly so. Praise had been pretty much unanimous for this Brian K. Vaughan and Fiona Staples series, with many reviews comparing it’s scope and magnanimity to epics like Star Wars and Lord of the Rings. Though Saga does borrow from specific science fiction and fantasy tropes, it’s by and large its own beast. From the shocking first page to the charming final cliffhanger, Saga Vol. 1 is a crash course in comic storytelling, written and drawn by two of the finest creators in the industry. It’s absolutely marvelous. Explaining Saga to a friend is akin to relating a surreal Dalí painting realistically. In a tale of star-crossed lovers, Vaughan weaves multiple arcs around the fate of a couple, Marko and Alana, and their young child ─ the narrator for the story, providing a creative means of necessary exposition,  while also implementing some of the strangest characters fiction has ever seen. Marko is a liberal-mouthed, horn-headed man from a moon called Wreath, while Alana is a hard-nosed, wing-strutted woman from a planet called Landfall. These two worlds have been at war for some time, and serve as the Montagues and Capulets of the story. But like Romeo and Juliet, Marko and Alana find each other, fall in love, and have a baby, leading to representatives from both sides hunting them down. And then the strange ones appear.

[pullquote]“if there was ever a time these two got along, nobody remembers it”[/pullquote]

There’s a bounty hunter, The Will, freelanced to hunt for the couple with his cat, Lying Cat. No really, she’s called Lying Cat. Why? Because she can sniff out lies, duh. There’s Prince Robot IV, who is really just a gray man with a TV for a head. A member of the Robot Kingdom, which has strenuous ties to Landfall, Prince Robot IV is also forced to find the lovers. Along the way we meet a spider woman, a monkey man, and a ghost missing half its body.

It’s funny to think about how ridiculous these creations are, but in truth, they’re some of the realest characters I’ve ever encountered. From page one, Vaughan supplies Marko and Alana’s relationship with such a beautiful disquietude that you can feel their need for escape. The reader opens to Alana in labor, Marko’s head hidden between her legs, and no one thinks, hey, why does that guy have horns? It’s the love that comes off the page, and when Marko steps back and says, “You have never been as beautiful as you are right now,” it’s not corny. It’s real. The Will’s a loner, and the emptiness of space seems to ring true in his eyes. Prince Robot IV’s a victim of shell shock, as remnants of the war appear on his screen. Vaughan’s knack for deep-rooted characters is nothing new; he did it in Y: The Last Man, Ex Machina, and Pride of Baghdad. But Saga’s different. The characters in Saga feel like the friends you make in dreams from which you refuse to wake.

Fiona Staples was not just the right choice for this book, she was the only choice. While Vaughan built the Saga world on these outstanding, fantastical ideas, Staples built it on the tiniest details. From the shading on both planet’s surfaces to the grotesque beauty of Marko and Alana’s freshly received daughter, the level of detail here is unparalleled. Much in the way Star Wars is memorable not just for its stories, but also for the look and feel of its worlds, Saga has a look and feel all its own. It’s truly a testament to Staples’ pencils that there is no Marko and Alana without her. In another artist’s hands, it would feel contrived and ineloquent.

Saga’s worth the hype. It’s epic in scope, but brimming with hilarity only found in the most irreverent sitcoms. The characters are memorable, the situations are unforgettable, and in the end, it’s a book worth reading not once, but over and over again.