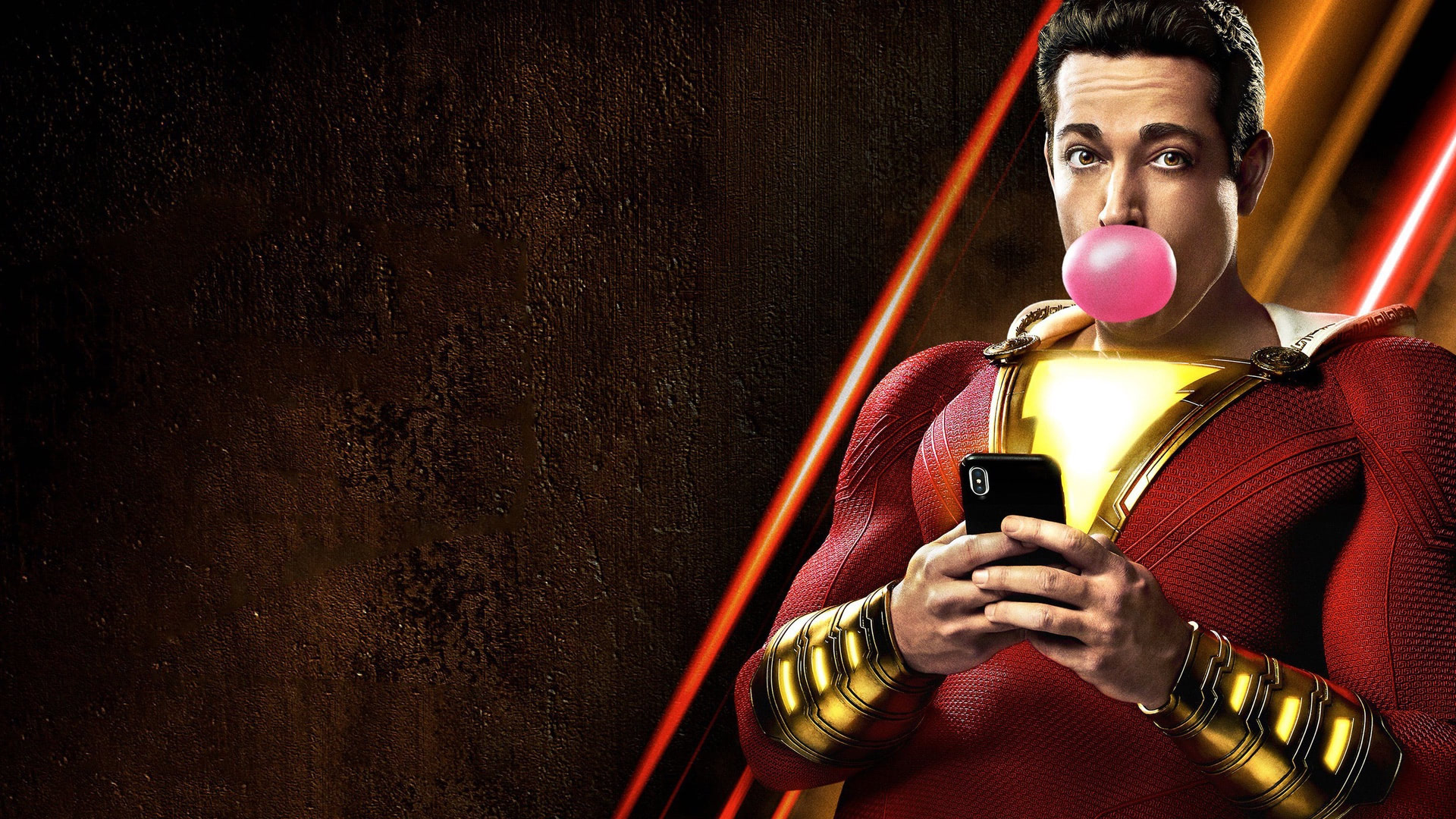 Let’s face it, the market is saturated with superhero movies right now.  Marvel’s got its share of different properties, from Iron Man and Captain America to recent additions Black Panther and Captain Marvel, with even more on the way.  DC has come on strong as of late, with Superman, Batman, Wonder Woman, and Aquaman offerings.  That’s not including DC’s television offerings, which includes the likes of Gotham, Arrow, Flash, and Supergirl.  If you don’t like Marvel or DC, you can always watch The Umbrella Academy on Netflix.  If you’re looking for more kid-friendly fare, you can always pop on The Incredibles or Big Hero 6.  I think if you sat on your sofa and watched superhero-related shows and movies back to back, you’d probably need about five straight months to get through it all.

So, with hundreds of superhero offerings already available, is Shazam! (not to be mistaken with the horrible 1996 genie movie starring Shaquille O’Neal, Kazaam) worth the time?  In my humble opinion, it is.  It doesn’t do anything new with the superhero origin story, as a matter of fact, it’s got a feel very much like Spider-Man (pick any of the three movie reincarnations…or even the latest animated version, Spider-Man: Into the Spider-Verse) or Ant Man, but it takes the tried-and-true formula of, “flawed, but good-at-heart nobody gets powers and learns that having powers isn’t always what it’s cracked up to be,” and injects with some fun and winks at typical superhero origin tropes and even other DC properties.  It helps that the actors involved seem to really be having fun with their parts and the script isn’t bogged down with a ton of plot points, convoluted backstory, and exotic locales (I’m looking at you, Aquaman).  However, I will say that this movie might not be for everyone…those looking for DC’s recent string of dark, broody, self-conflicted, mopey superheroes or the brutal semi-realistic violence of Netflix’s Daredevil or Punisher are going to have to look elsewhere for their fix.  Shazam! is silly, relatively family-friendly superhero fun that doesn’t take itself so seriously (even going so far as to mock the name Shazam).

So, if the fact that Shazam doesn’t run around gunning down drug dealers or breaking the necks of his enemies hasn’t scared you off, let me give you a brief synopsis of the film.

Billy Batson (Asher Angel) is an orphan who was separated from his mother when he was a little boy.  Fast forward to the present and Billy is a street-smart teen who’s bounced around from orphanage to orphanage because he’s more concerned with finding his birth mom than putting down roots with a new foster family.

The theme of family is pretty much one of the main strands running through this movie, since on the opposite side of the coin, we have Thaddeus Sivana (played by perennial villain Mark Strong), who hates his family and is willing to do almost anything to prove himself to them.  This obsession will drive Sivana throughout the movie.

In the present day, Billy has been taken in by his eighth foster family when he is tapped by the titular Shazam, a wizard (Djimon Hounsou) responsible for keeping the seven deadly sins at bay, to be his champion.  By placing his hands on the wizard’s staff (yes, Billy makes fun of the innuendo, as well), Billy transforms from a teenage boy to an adult (played as if he were born to play the role by Zachary Levi) that has the wisdom of Solomon, the strength of Hercules, the stamina of Atlas, the power of Zeus, the courage of Achilles, and the speed of Mercury.  As an aside, I can’t understand why the wizard had to be named Shazam…as if there were a magician named “Abracadabra” somewhere…why couldn’t they just had the magic word be, “Shazam?”  Yes, that’s just me overanalyzing the movie…sorry.

Anyway, a good portion of the movie is Billy/Shazam working with his foster brother, and superhero aficionado Freddy Freeman (Jack Dylan Grazer) to determine exactly what his powers are.  The scenes with Freddy and Billy/Shazam testing Billy’s new powers are just good, silly fun.  Based on his performance, you would truly believe that Zachary Levi was a teenage boy who had turned into an adult who now has powers on par with Superman.  Jack Dylan Grazer’s enthusiasm over discovering that his foster brother has super strength, “bullet immunity,” and the ability to shoot lightning from his fingers only lends to the fun.

Of course, Billy being a teenager under all the muscles (and padding), he isn’t exactly the most altruistic guy when he gets these powers.  I won’t go into any more detail because I don’t want to ruin the story arc; like I mentioned earlier, the script for Shazam! doesn’t really go too far off the beaten path when it comes to the story, the trip is just a little more fun because of the writing and the actors seemingly having a blast playing their parts.  Suffice it to say, Billy indeed has to learn that, “with great power comes great responsibility,” not just a means to score free munchies and spending money.

Visually, Shazam! does a great job of creating a superhero and his world without become “visual vomit” like I feel other lighter (less dark and brooding) movies like Aquaman or Thor: Ragnarok threw at you.  Many of the scenes where Billy’s learning how to use his powers actually look like someone edited an episode of Jackass to make the stunts look slightly more impactful.  While I loved Black Panther, I thought one of the issues it has was with its overuse of CGI.  In one scene where Black Panther and Killmonger were fighting, it looked as if someone was taking two Barbie dolls and smacking them together.  While Shazam! still has its share of CGI, it’s used a little more sparingly and it’s a little more seamless.  The visuals are a little less adventurous than some of the bigger budget superhero movies that have released recently, but they do a good job doing what they need to do without overshadowing the human actors.

The strongest thing Shazam! has going for it has to be its cast.  Zachary Levi does a great job playing a teenager-turned adult (second perhaps only to Tom Hanks in Big…definitely better than Jamie Lee Curtis in Freaky Friday) and Mark Strong was basically born to play villains.  Jack Dylan Grazer and Faithe Herman (playing the adorable Darla Dudley) lead the charge as Freddy’s foster family.  Rounding out the cast, Cooper Andrews (basically playing pre-The Walking Dead-zombie-apocalypse Jerry) and Marta Milans do a good job at playing Billy’s foster-kids-turned-foster-parents.  It’s a shame that Dijmon Hounsou doesn’t get more to do as the wizard version of Shazam, but his booming voice and mere presence onscreen is certainly an add, especially for limited screen time.

Yes, Shazam! is a goofy, lighthearted movie.  However, considering this 1970s television show based on the character (who was originally named Captain Marvel until a legal battle with Marvel had DC change the character’s name to Shazam), this movie is downright serious.  As I mentioned, this isn’t your type of movie if you want to see villains maimed, shot, and slammed into walls.  If you want your heroes brooding and conflicted, or to have to watch their entire family killed in front of them, this movie isn’t for you.  If you’re sick of the same formula of an everyman/woman getting powers and then coming to grips with said powers, this movie isn’t for you.  If you’ve never watched a superhero movie because you think they’re stupid on principle, this movie won’t change your mind.  If you want to watch a superhero movie that isn’t wall-to-wall violence, has a pretty decent message about the importance of family (and what true family is), has a relatively decent story, and doesn’t require you to watch 15 movies just to understand the backstory of what’s happening, this movie might be for you.  Simply put, Shazam! is a fun way to spend a couple hours with someone who doesn’t take their superhero movies too seriously.  Sure, it really doesn’t tread any new ground, but the ground it does tread it does in a really fun and entertaining way.  I highly enjoyed it and highly recommend it.

Oh yeah, stay through the credits, which happen over what appears to be drawings in a teenager’s notebook.  There are plenty of nods to other DC properties throughout.  And, yes, there is a post-credit scene.  No spoilers about that.

Synopsis: A wizard grants a teenaged orphan with superpowers, which he finds might be more trouble than they’re worth.