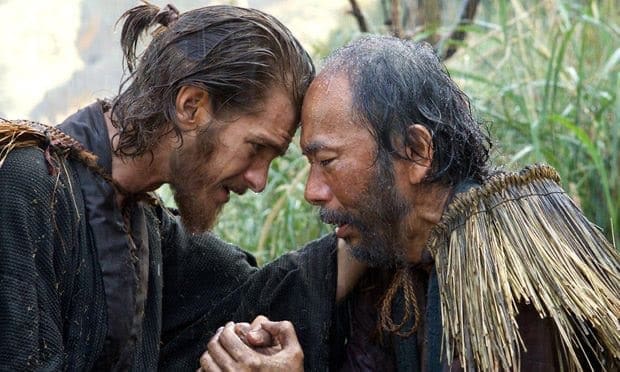 Martin Scorsese is one of the best filmmakers in the world. He’s made amazing movies that include The Wolf of Wall Street, The Departed, Casino, Goodfellas and more. While his most recent film, Silence, tells the story of the difficulties the church had in bringing Christianity to Japan, it doesn’t have the same powerful emotion that many of Scorsese’s other films are known for. It offers a few defining moments but falls considerably short of greatness.

Silence is the story of Father Rodrigues (Andrew Garfield) and Father Garrpe (Adam Driver) as they venture from Portugal to Japan in search of Father Ferreira (Liam Neeson) who has reportedly fallen from God and lost his faith. While Buddhism is the primary religious practice in Japan, that didn’t stop Christians from attempting to bring their faith to the country. While they were met with hostility, even today only about one percent of Japan is Christian.

The first half of Silence plays out as one might expect from a Scorsese film. We see the hardships Rodrigues and Garrpe face when they reach Japan, as well as the hostility that the Japanese Christians face. It was not a good time to be Christian in Japan and Scorsese makes that very clear throughout the film. You care about the Japanese villagers and the hardships they face, and you fear for the lives of everyone on screen.

Garrpe is the voice of reason during the early parts of the film, while Rodrigues is the more emotional of the two, struggling with his faith as he witnesses what’s going on in Japan. The problems begin when the film shifts focus on featuring Rodrigues as the main character, leaving Garrpe behind. The audience continues to see Rodrigues struggle, but there’s no emotion and little reason to care about this struggle. Even when Rodrigues is brought to tears over the events playing out in front of him, the emotion is lost.

The problems with Silence are not an issue with the acting or even the directing. The issues begin and end at the core of the film, the script. Rodrigues and Garrpe are split for some time, but when they are finally reunited the exchange is limited and doesn’t advance the narrative at all. Even when Rodrigues is told of the lies that the Japanese have spread to Garrpe, it has no payoff and ends up being a moot point in the film.

Father Ferreira is one of the primary motivations for Rodrigues and Garrpe to be in Japan, but even he offers very little to add emotion or advance the story. By the end of the film (which runs over two and a half hours), the audience will have difficulty trying to determine what was the point of the film. All of the major plot points have little to no payoff as the characters have almost no development from beginning to end. Rodrigues struggles with his faith, but even that doesn’t offer much payoff by the time the credits roll.

One especially baffling aspect of the film is Yôsuke Kubozuka’s role of Kichijiro. He serves as the guide for the two Fathers as they enter Japan, but acts more like comic relief than the emotional and spiritual guide he could have been. He has no character development at all throughout the film and in some cases can even be considered a mockery of what Father Rodrigues is going through.

Silence is a film that could have been amazing. Instead, it offers a lengthy journey with minimal character development and no payoff for the audience. It lacks emotion on all fronts as even character deaths don’t have the impact they should. There’s a good movie somewhere, but it’s hidden beneath all of the problems plaguing Silence.

Synopsis: In the seventeenth century, two Jesuit priests face violence and persecution when they travel to Japan to locate their mentor and propagate Catholicism.

Get an expert academic writing assistance! We can write any paper on any subject within the tightest deadline.